If you're looking for an epic bikepacking or cycle touring trip, we have just the adventure for you! Sam Jones from Cycling UK shares with us his favourite long-distance cycle routes in Great Britain for both on and off-road adventures.

The terms cycle touring and bikepacking are often used in tandem but there is a difference between the two, the most obvious being the type of terrain they cover.

All of these routes can be tackled on a touring bike or a good hybrid with a wide range of gears, though lightweight travellers who stay at hotels and only travel with a credit card could get by on a road bike.

Crossing the Uists on the Hebridean Way (photo: Daria Taddei)

You don’t have to head to the Caribbean or Med if the sound of white sandy beaches and crystal blue waters appeals. The Outer Hebrides has all that plus mountainous landscapes, otters, and tweed – what more could you want? Admittedly the waters are much colder than the Med, and the winds perhaps a bit stronger, but if you’re looking for an accessible adventure that will take you on an “end to end” then the 197-mile Hebridean Way could be for you.

Tackle it over a number of days at your leisure, or time it to perfection so you make each ferry for an all in one effort, either way you’ll have a grand time. With only one real ascent along its length, it’s also great for those who prefer the flatter rides.

Land's End from above

On many a cyclist’s bucket list, cycling the end to end or Land’s End to John o’ Groats gives you the best of England and Scotland. It’s a fantastic 962-mile challenge that most will ride over a couple of weeks, and has enough flexibility to allow you to veer off along the way to the places that appeal.

Starting in Cornwall, many report this to be the toughest leg due to its unrelenting climbs, but that’s all perfect practice for the many miles ahead of you. You can also do this route backward, starting at John o' Groats in Scotland.

Literally Welsh for “green lane”, this 236-mile route from Cardiff to Holyhead, is appropriately named. You’ll pass through the Brecon Beacons, Cambrian Mountains and skirt the edges of Snowdonia along a network of quiet and traffic-free ways.

You’re riding through mountainous territory so expect – or at least hope for – big views, but also a reasonable amount of climbing. Make sure you’ve got the gears for that and any potential luggage you’re carrying too.

One of the UK’s most popular cycling routes, this 138-mile Coast to Coast (C2C) route starts at either Whitehaven or Workington and gives you two possible finishing points on the North Sea Coast in Sunderland or Tynemouth. The majority of route options follow the National Cycle Network apart from some sections of the Whitehaven to Sunderland route.

Ride west to east with the prevailing wind, unless you want to make the route more challenging. You’re crossing the watershed between the North and Irish seas so there will be hills, but it’s worth it as you pass through the industrial, agricultural and natural landscapes of the north of England.

A shade over 68-miles, the Isle of Wight loop is achievable in one day, but most will find it far more satisfying to split it over two as you head off from Ryde. Reportedly blessed as the most sunny part of the UK, your tour of the island is mostly along quiet lanes, apart from a stretch along the undulating old military road on the SW of the island.

There are some stretches of off-road cycle path from Freshwater to Yarmouth, but skinny tyres while not ideal shouldn’t struggle overly on this perfect weekender. If you’re down longer and fancy a longer tour, your can always take the ferry from Yarmouth (to Lymington) or Newtown (to Southampton) and explore further afield on the mainland. One bit of advice if you’re travelling by train, book your ticket to Ryde rather than Portsmouth and that will save you ferry fare.

Best bikes for off-road routes are so dependent on the weather. A mountain bike with front suspension will see you over all of these routes through most conditions, but on a gravel bike will you’ll have a lot of fun on King Alfred’s Way, the North Downs Way and the West Kernow Way – just so long as the conditions are right!

Despite only being launched in 2020, this 217-mile loop route around the Saxon kingdom of Wessex is steeped in history that will take you back to the Stone Age. Starting in Winchester, the King Alfred's Way is a largely off-road route. It will take you from the burial spot of Alfred the Great in Winchester, past his birthplace in Wantage, as well as iconic sites such as Stonehenge, Avebury stone circle, Iron Age hill forts, Farnham Castle, and Winchester and Salisbury Cathedrals.

It connects the North and South Downs Ways, the Ridgeway and Thames Path and forms the backbone of adventure in SW heartland of England. Don’t be fooled by your potential passage through the idyllic landscapes that inspired artists like Paul Nash, it is a challenge. You’ll need to choose your bike wisely, as depending on the weather will decide for you whether a mountain or gravel bike are more suitable.

The North Down’s Way runs for 150-miles from Farnham in Surrey to Dover in Kent. In 2018, Cycling UK working with the national trail and the British Horse Society put together a riders’ route which is perfect for bikepacking along.

A route of two halves, the Surrey Hills section will test your skills and fitness as a rider and are perhaps best suited to a hard tail mountain bike. Blasting through Kent along the dirt tracks you’ll have a cracking time on a gravel bike – the big question will be which one is best for the whole route?

Not for the faint hearted, but if you’re looking for a multi-week epic, then the 800-mile Great North Trail could be for you. Starting in foothills of the Peak District, you follow the Pennine Bridleway and just keep heading north until you hit Cape Wrath or John o’ Groats – riders’ choice.

Using existing trails such as the John Muir Way and An Turas Mor, you’ll pass through dramatic landscapes where often you could be the lone soul for miles. You’ll want to be prepared mentally and mechanically before tackling the GNT, but those who finish up at Cape Wrath will have the added benefit of being about to join the Cape Wrath Fellowship, begun in 1949 to reward those with the spirit of adventure.

You could try it on a gravel bike, but most people firmly recommend a mountain bike.

The West Kernow Way was launched at the tail end of summer in 2021 as part of the wider European Regional Development Fund EXPERIENCE project, and is designed to encourage off-season tourism in Cornwall. It can of course be ridden in the summer, and is a perfect way to see the region away from the crowds. A 150-mile loop route, it follows a figure of eight heading west from Penzance to Land’s End on the Penwith Peninsular before dropping down to Lizard Point and looping around Redruth.

You’ll travel along quiet roads, byways, bridleways and lost ways on an adventurous route which will give you the very best experience of Cornwall on two wheels. Best travel light as the hills can be brutal, but you should be fine on a gravel bike for most of the route, unless there’s been a long spell of rain.

The 100-mile South Downs way is a beautiful bikepacking adventure which will take you through some of the finest countryside in the south of England. This route is my no means flat and you'll spend the majority of your time up on the downs, which only means one thing - fantastic views!

Along the route you'll find water taps, bike stations where you can pump your tyres and a handful of places to eat and stay. However, it's still worth dropping down now and again to fuel up and enjoy the quaint villages below. The route is easy to navigate and the terrain varied; chalk paths, forest trails and some road. For an extra challenge, try cycling up Butser Hill!

As beautiful as it was completing the SDW on a touring bike (above) it is not recommended! (photo: Helen Newman)

A shorter option to get you started

This 8.7-mile route is for cycle historians, and celebrates a ride undertaken in Wales’ Berwyn Mountains. Walter McGregor Robinson aka Wayfarer in a famous article titled “Over the Top” describes a cycling adventure as the clocks sprung forward in March 1919. On single speed steel bicycles, likely dressed in tweed, Wayfarer and two companions rode and pushed through snow and fog as they rode up a drover’s track that goes over the top at Pen Bwlch Llandrillo.

The account captured the imagination for a generation of riders and still inspires today - there’s even a memorial to Wayfarer now at the pass left by the world’s first and oldest off-road cycling club, the Rough-Stuff Fellowship. While the tweed and snow are optional extras for your ride, it’s the perfect start for an exploration into the wonders of riding off-road in Wales.

Add these epic cycle routes to your bucket list and off you go! If you're planning on carrying paper maps (always a good idea) then OS Landranger Maps are the best for long-distance cycle adventures across Great Britain.

Find the right maps for your trip Shop bike GPS

When Sam Jones is not out riding his bike, he works at charity Cycling UK. As well as providing information, resources and routes for cyclists of all abilities – from beginners to round the world adventurers – the charity aims to make cycling better and safer across the UK. To find out more and how you can support this charity visit: cyclinguk.org/join 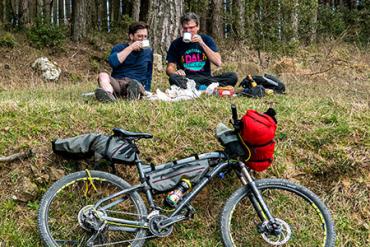 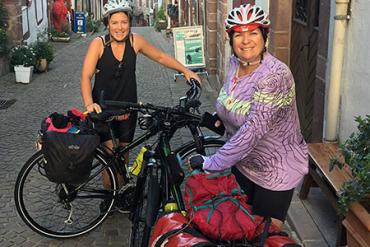 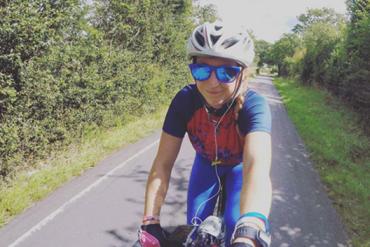