Follow the below links to OS Maps for detailed routes and paper maps for each fantastic family walk. Plus discover more walks near you, or plot your own with a 7-day free trial of OS Maps, on us! 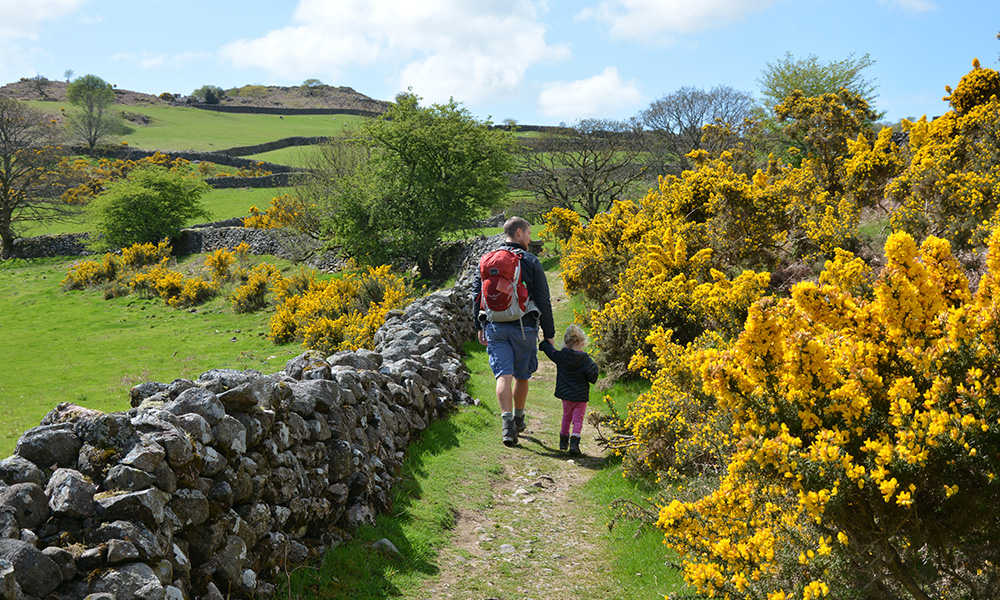 1. A Marine Safari at Wembury, Devon 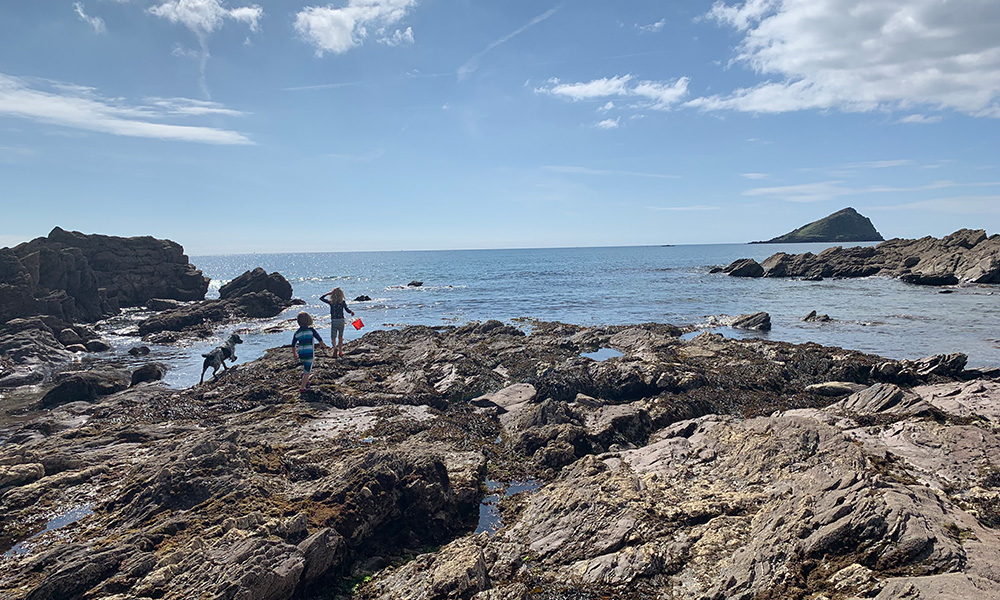 Beach days are great for engaging children in exploring, learning and getting creative outdoors, and coastal walks are filled with interesting things to look at and engage with along the way. The South West Coast Path edges the South West of England for 630 miles (1,015km) between Poole in Dorset and Minehead in Somerset, providing countless incredible stretches for walking and exploring.

Just along the Devon coast east of Plymouth, the beach at Wembury boasts a reputation as one of the best rockpooling destinations in the country. The rocky coves, slate reefs and vast wave-cut platforms here make it an ideal location for all sorts of marine wildlife, and it is designated as both a Marine Conservation Area and a Special Area of Conservation. Managed by the Devon Wildlife Trust, the Marine Centre at Wembury is a great source of information – pick up a spotting sheet to help identify the inhabitants of the local rock pools.

This walk follows the coast path from Wembury Beach to Wembury Point, passing a couple of lovely little beaches along the way – ideal if you’re bringing a dog over the summer months when there’s a dog ban on the main beach. Look beyond the distinctive wedge-shaped Great Mewstone to the vast blue stretch of sea to spot vessels of all shapes and sizes – from ferries and fishing boats to warships and oil tankers – coming and going at Plymouth.

2. Hillforts and Hurtleberries at Hurtwood and Holmbury Hill, Surrey 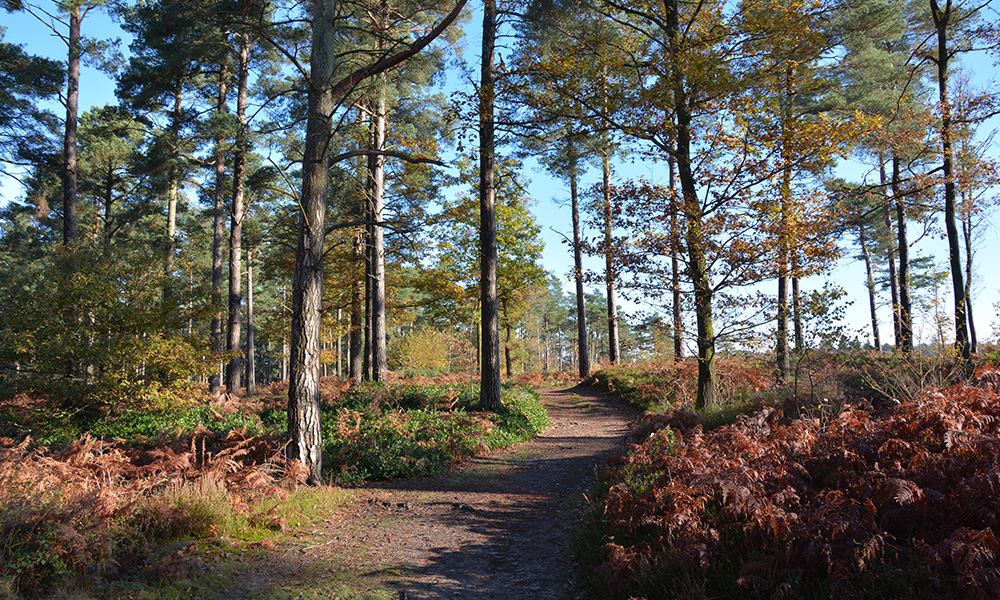 Foraging is always popular with children – and grownups – of any age. Bilberries, also known as blaeberries, wortleberries and wild blueberries among many other regional names, are safe, easy, and delicious to eat straight from their bushes over the summer months. The Hurtwood, standing high on the greensand ridge in the Surrey Hills, is carpeted in bilberry bushes, and its name was once thought to derive from ‘hurts’, or ‘hurtleberries’ – the local name for the fruit; however, it may actually derive from the Old English word ceart or churt for a rough common covered in gorse, broom and bracken.

The Hurtwood is privately owned, and looked after by a local charity, the Friends of the Hurtwood. As well as walkers and runners, cycling and horse riding is also permitted in the wood, so be aware of horses and bikes as you go. This is a great place to spot wildlife, too: the heather and bilberry cover across the woodland floor provides an ideal habitat for a number of snakes and lizards, including the endangered smooth snake and sand lizards, as well as birds such as the nightjar.

This walk takes in a loop through the woodland on clear, well-made trails, enjoyable at any time of the year. It passes through the picturesque village of Holmbury St Mary at around halfway, then makes an ascent of Holmbury Hill – an Iron Age hill fort with fantastic views out across the Surrey Hills. On a clear day, you can see the sea at Shoreham to the south, and the London skyline to the north. 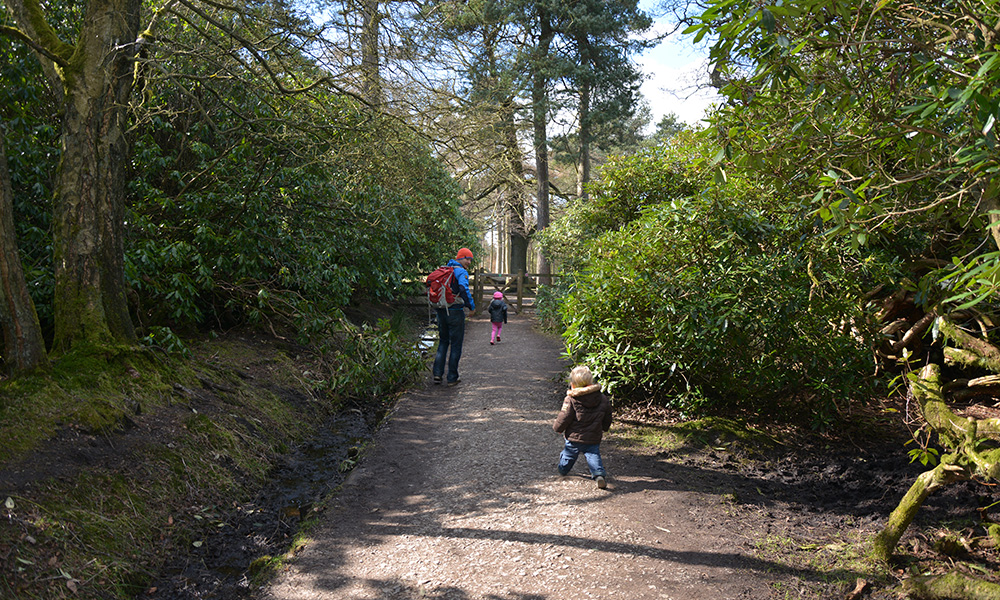 Boggarts are popular in folklore, particularly further north in England, and in children’s literature – from Susan Cooper’s ‘The Boggart’ to the shape-shifting terrors of the Harry Potter books. Definitions vary, but they’re often mischievous, mysterious and usually appear either indoors – as house fairies that sour milk and make things disappear – or outdoors, hiding behind trees, in marshes or under bridges.

The National Trust-owned Longshaw Estate covers 1,600 acres of wild moorland, rugged gritstone edges and peaceful woodland in the heart of the Peak District National Park. Networked with paths and trails, many of which are accessible for buggies and wheelchairs, it’s a wonderful place to discover spectacular views, paddle in the brook that runs through the estate, spot wildlife and, if you’re lucky, even find some boggart houses. There’s some fascinating human history to discover at Longshaw, too, from the Bronze Age ring cairns and hut circles on the moors to the remnants of millstones that can be found dotted across the estate. These date back to the 15th century, when millstones were made at Yarncliffe Quarry.

This walk follows the pink waymarked Burbage Brook trail around the estate, taking in woodland and following a stretch of the brook, perfect for picnics.

4. Legends and Landslips on the Skirrid, Brecon Beacons 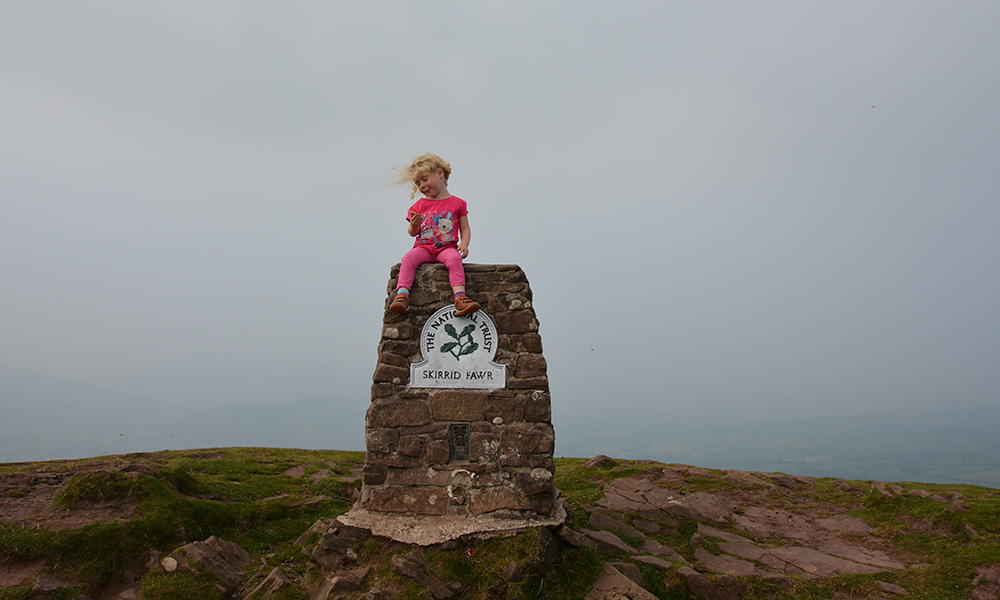 Local legend has it that the Skirrid (Ysgyryd Fawr in Welsh) owes its distinctive shape to an argument between the giant Jack O’Kent and the Devil over whose mountains were higher. Jack was adamant that it was the Black Mountains in Wales, while the Devil argued it was the Malvern Hills, over the English border. In his fury at Jack being right, the Devil picked up a huge scoop of soil in his apron, intending to use it to add height to the Malverns. Unfortunately, the apron strings snapped before he crossed the border, instead piling the soil at the northern end of the Skirrid, which now marks the easternmost edge of the Brecon Beacons.

Whatever the real reason for its shape – scientists suggest it is more likely to have been Ice Age landslips – the Skirrid rises sharply from the surrounding lowlands, its striking outline visible from miles around. This adventurous walk starts with a climb through the densely wooded lower slopes on an inviting, winding trail. Further up it emerges on to breathtaking open mountainside, following an airy ridge to the trig point-topped summit. On a clear day there are splendid views out across the Black Mountains and wider Brecon Beacons landscape, and to the peaceful Usk Valley. Descend the way you came or, for the footsure, drop steeply into the valley below and follow the trail around the base of the Skirrid to return to the start.

5. A Poetic Walk at the Birks of Aberfeldy 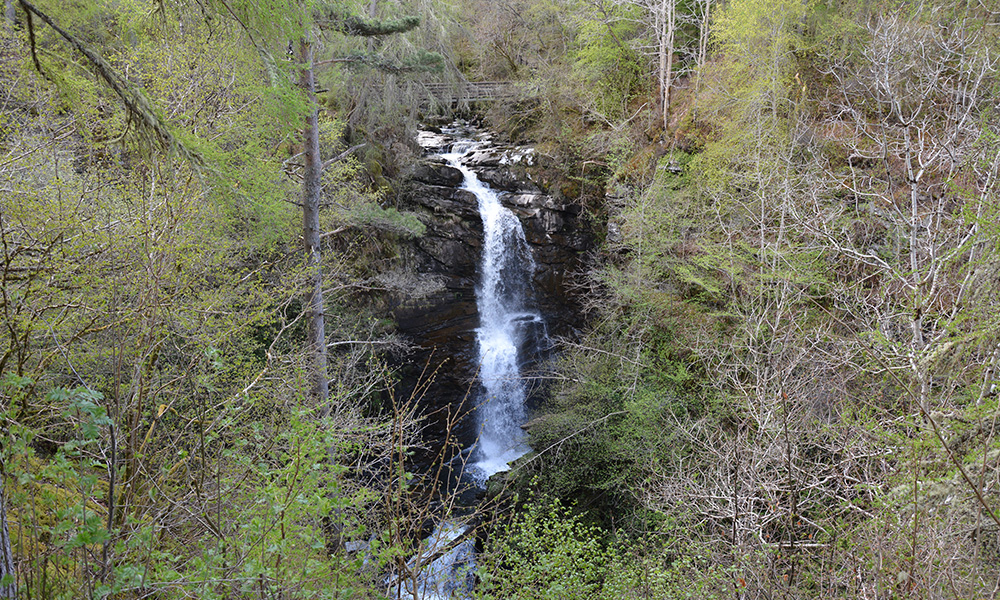 The beautiful, wooded gorge of the Moness Burn, just outside the village of Aberfeldy, was once known as the Dens of Moness. However, the area was renamed in honour of Robert Burns’ poem The Birks o’Aberfeldie, penned by the national bard in 1787 after a visit to the area. You’ll find a few lines of the poem, and a life-sized statue of Burns, as you explore.

With its winding paths and steps leading around a densely wooded, rocky ravine, where waterfalls fill the air with spray and thunder, a walk here is always an adventure. From the very top, the Falls of Moness drop majestically in an 82 foot- (25 metre)-high waterfall. During the autumn, the trees are ablaze orange, red and yellow. It is thought that the gorge has been continuously covered in woodland for some 8,000 years, and today it’s designated a Site of Special Scientific Interest for its flora.

This walk follows the clear, main path up through the trees to reach the viewpoint at the very top. From the bridge here there are beautiful views down the gorge and the Tay valley to the mountains beyond and a real feeling of being high in the tree canopy. This is a great place to spot red squirrels, their bright-eyed cheeky faces peering out from the boughs. 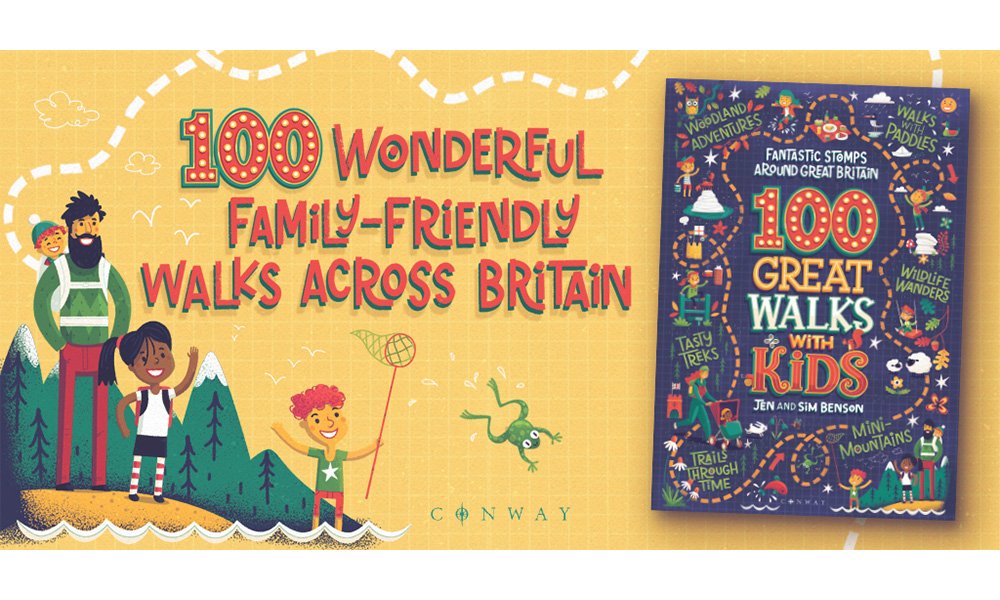 100 Great Walks with Kids, book by Jen and Sim Benson

If you're looking for more great family walks like these, then check out 100 Great Walks with Kids by GetOutside Champions Jen and Sim Benson. It's yours now for 25% off using discount code GETOUTSIDE25*.

It features 100 fantastic stomps across Britain suitable for families with children from 0 upwards, signposting routes with any hazards, refreshment options and toilets, whilst also rating them on dog-friendliness and buggy suitability.