We speak to OS Champion Alex Staniforth about his experience with mental health and how the outdoors has helped him and so many others. After overcoming a string of challenges including Everest, Alex now runs charity Mind Over Mountains, which uses nature to improve people's wellbeing.

I wasn’t exactly your ideal candidate for attempting Everest and my outdoor journey has never taken the conventional path either.

I was brought up in a small village called Kelsall in Cheshire, where I was lucky to have Delamere Forest on my doorstep. We spent many family weekends in our caravan exploring North Wales and walking our dogs. Spending time wandering in nature and all weathers instilled a fascination with wildlife and the environment from a young age, and a burning desire to protect it.

Nature also offered me some respite from my challenges growing up. Having a brief bout of childhood epilepsy was an unsettling experience that led to other challenges like anxiety and panic attacks. I was relentlessly bullied through school and have suffered with a stammer all my life. But walking our dogs around the local fields, forests and trails was always a safe space where I found some calm, if only for a short while.

Alex on the summit of Mont Blanc

My dad was a runner and had done various adventurous things, whereas I was the cliché kid who came second to last at cross country in PE. I despised sport and could never have contemplated that one day I’d be winning races or running 100-miles for fun. I fell into running on holiday in France when my step-mum offered me a two euro prize/bribe if I could keep up with my dad on a run. And so, the outdoors became and has been a vehicle where I could prove myself and others wrong. These seemingly small steps were all cementing a mindset that I could achieve more than I realised.

Alex on Souther Fell, one of his earliest summits

My confidence grew over the years and I began challenging myself with more outdoor sports – from rock climbing to scuba diving and paragliding. The more extreme, the better! It was my fateful first hill walk in the Lake District at 14 years old that added a whole new meaning. At some point that day I pondered the question "where is Mount Everest?".

I came home and began to research this mystery mountain I had heard about and discovered that mere mortals had climbed it. I just knew at that moment I had found my calling: it seemed the ultimate thing to achieve and prove myself, and all the bullies, wrong.

Over the next four years I put the steps in place to make this dream a reality. I began rock climbing in the Lake District, moving on to winter climbing in Scotland. I climbed Mont Blanc aged 17 and then spent a month in the Himalayas climbing on Mera Peak and Baruntse. Raising the money to get to Everest in the first place was a challenge and it became a full-time job whilst I was finishing my A-Levels.

Alex at Everest Base Camp after the 2015 earthquake

No amount of training could have prepared me for what happened next. On my first Everest attempt in 2014, a huge avalanche tragically killed 16 people just before we arrived at Base Camp. I returned in 2015 and we were just below Camp One in the Western Cwm when the Nepal earthquake hit. Our team were trapped at Camp One for two days whilst aftershocks rained avalanches down from both sides. We had no idea that Base Camp had been hit by a much bigger avalanche, triggered by the earthquake, and our home on the mountain was gone. 22 people had died on the mountain and over 9,000 people across Nepal.

My biggest challenges though, have always been closer to home. I’ve suffered episodes of depression and anxiety since I was 16 but running and cycling were always my choice of medication and helped me deal with it. The outdoors has been my ‘Natural Health Service’ and the temporary escape, boost of endorphins and sense of achievement always help – it’s hard not to feel better outside!

Not being able to run due to an injury in 2012 led me to develop the eating disorder bulimia, which is something I must carefully manage even today. After Everest, spending time outdoors was an integral part of my recovery and dealing with the trauma. I channelled my energy into more fundraising challenges, writing my first book and motivational speaking – which has now become my full-time work. Despite my stammer, I’ve felt obliged to share these unique experiences to empower others with their own challenges and self-limiting beliefs, both at home and in their businesses.

I heard about Elise Downing running around the coast of the UK and taking people along the journey with her, which inspired the idea for Climb The UK. Climb The UK is a challenge which involves climbing to the highest point of all 100 UK counties as well as cycling, walking, running and kayaking over 5,000 miles in 72 days, the fastest time ever.

It truly opened my eyes to the diversity and beauty of our home nation. It really has everything: from the wildest Munros and jaw-dropping coastlines to military firing ranges and the highest point of Kent in someone’s back garden! These were all things I had taken for granted. Best of all, it was a chance for others to take part and join the conversation around mental health, coming to walk and cycle with me as I passed through their counties. Only then did I realise that mental health affects everyone – we’re all dealing with something.

The final summit of Climb The UK. Credit: Jonathan Davies

The outdoors and me

Your environment dictates your mindset, so I moved to Kendal in the south of the Lake District in 2019 to be in my ‘happy place’ and the best possible environment for my mental health. Being able to run the Kentmere Horseshoe at sunrise and be back to my desk for 9:00am continually reminds me why I made the decision. Albeit when the weather is good, my work productivity does suffer!

The outdoors has mostly been, and still predominantly is, an independent pursuit. Discovering the mountains as a teenager gave me a place for self-expression, relying on my mind and body alone to overcome the challenges of nature. That’s what builds the confidence and sense of accomplishment. I also value this time for thinking, reflecting and processing things which we rarely get time to do in our busy lives. We’re so distracted by technology and filling every spare gap of time – waiting for a bus or stood in a queue – with browsing social media on our phones or ticking off admin. Our best creative ideas and thoughts often come during these moments of flow rather than the focused efforts at our desks.

The importance of the outdoors for our wellbeing was highlighted by the pandemic. I live and mostly train alone, so I found the various lockdowns pretty easy. Without such easy access to trails and hills from my doorstep, it would have been an entirely different experience. I was grateful: but knew others weren’t so lucky.

Mind Over Mountains on Blencathra in the Lakes

After my Climb The UK challenge, I was invited to lead an event with Adventure Uncovered, promoting the wellbeing benefits of hill walking. We combined two days of hill walking in the Lake District with professional coaching, mindfulness, counselling and inspirational speakers who have achieved extraordinary things despite their own mental health battles. That was a transformational experience and myself and my friend Chris realised we had a powerful concept that we needed to take to as many people as possible.

In 2020 we registered Mind Over Mountains as a charity to restore mental health through nature. Since then, we have been delivering day walks, weekend retreats and mental health first aid courses across England and Wales. We’ve formed partnerships with the NHS, Cambridgeshire Police and the Welsh Ambulance Service to support those most affected by the pandemic

Mutual support/suffering on Ben Lawers during Climb The UK

Loneliness has only been exacerbated by the pandemic where our connections with family, friends and colleagues were broken. Even with our best efforts on Zoom screens and virtual quizzes, inevitably many people experienced loneliness, which can severely affect our mental and physical wellbeing. Ultimately, we are social animals – even the introverts like me – and need to feel valued in a community to feel safe and solve problems.

We’ve seen the power of the outdoors in creating community and bringing people back together again. Mind Over Mountains was able to get started again as pandemic restrictions eased and for some people it was the first time they had been amongst others in months. We offer a safe space for people to walk and talk with trained professionals, regardless of what challenges they may be facing. There’s something about being in open space, walking side by side with like-minded people, that makes it easier to open up about whatever you may be dealing with – without pressure, judgement or expectation.

The hardest part is always taking the first step and Mind Over Mountains works to reduce these barriers. It takes time to build the confidence and skills to safely go into the mountains, so being in the hands of trained professionals can allow people to do things they normally wouldn’t. Whilst meeting a group of strangers can feel daunting, we always go up the hill as strangers and come down as friends. We also provide bursaries for anyone in financial hardship to attend.

The finale of Alex's 3 Peaks Run, raising over £11,000 for Mind Over Mountains. Credit: Jonathan Davies

The outdoor community has also been an integral part of my own ultra-endurance challenges. UK adventures have continually restored my faith in the generosity and good spirit of people that often goes unnoticed. I’ve had people driving 200-mile round trips just to come and cycle with me or bring a new pair of shoes. I’ve had strangers offering me a warm bed and meal for the night, friends dedicating their days off to crew, sports masseurs coming to my aid free of charge in pub car parks and people waiting for hours on dark wet roadsides just to hand me a donation for the charity– the list goes on!

Crossing the border on his Climb The UK challenge

My Everest journey has evolved into a much bigger mountain – to help others access our ‘Natural Health Service’ and leave something bigger behind. We really can’t afford to lose it.

Find out more about Alex Staniforth and his charity Mind Over Mountains. 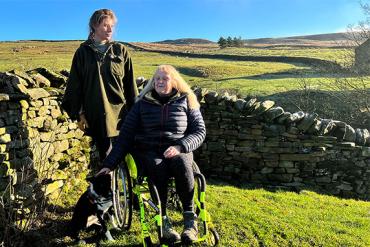 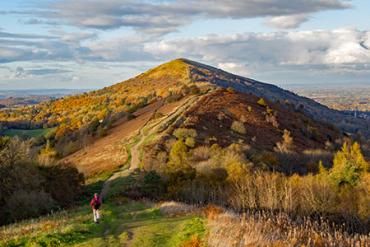 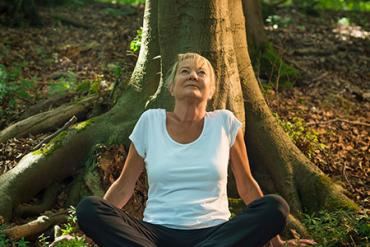 How nature improves our mental health