Claife Heights is situated on the west shore of Windermere in the southern Lake District. The hillside away from the water’s edge is predominantly woodland but the plateau is open providing some spectacular views across both Windermere and Esthwaite.

The closest town is Ambleside, with a great selection of outdoor shops, pubs and cafes. It's easily accessible with stunning views all the way around. This route gives a true taste of the Lakes in just a couple of hours. 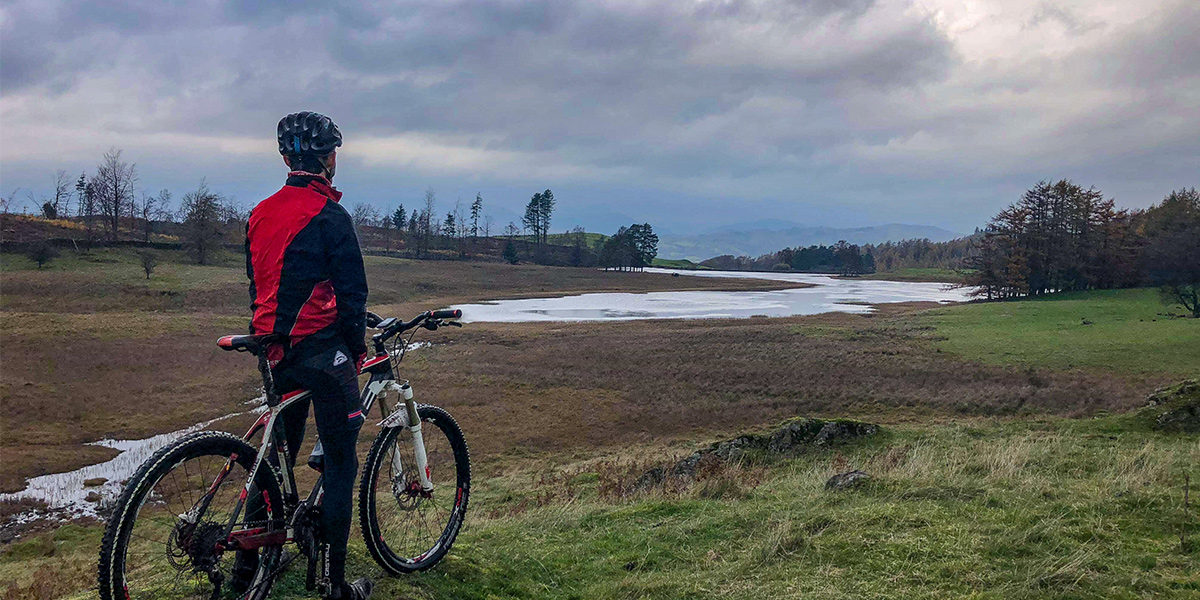 On bike, with Tarn behind

The Lake District is a hub for adventure, whether you’re looking for multi day hikes or just escaping for a few hours. Even the drive to the car park has aspects of this - small country lanes winding down to the lake side!

The route starts by following the lakeside along large gravel tracks. These provide a perfect gentle warm up for climb to the top of Claife Heights. Keep an eye out for low flying military aircraft - it’s a common flight path for fast jets and the large cargo planes.

Belle Isle and the other small islands in the lake become visible a couple of kilometers, and before you know it you’ve cycled 5km and reached Windermere Ferry Station. 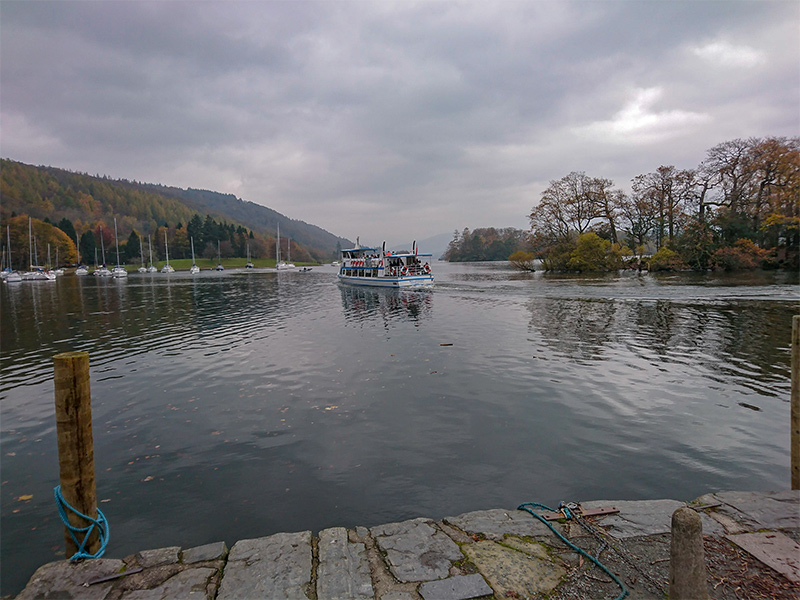 After the ferry station the route joins the road a couple of kilometers. The climb starts just a few hundred meters after the ferry station, as you turn away from the lakeside. It does get a little steep in some sections but finding an easy gear and good rhythm will get you into Far Sawrey.

Passing through the village, a small road joins from the left and the main road then turns to the left. On this corner, a single track road climbs away from the main road on the right hand side of the bend. The climb is short and steep, but gets you into the exploratory section of the route.

A small river crossing (there is also a bridge) identifies the start of the more technical riding, beginning with another short climb. But shortly after, you are finally rewarded with spectacular views as you reach Moss Eccles Tarn. 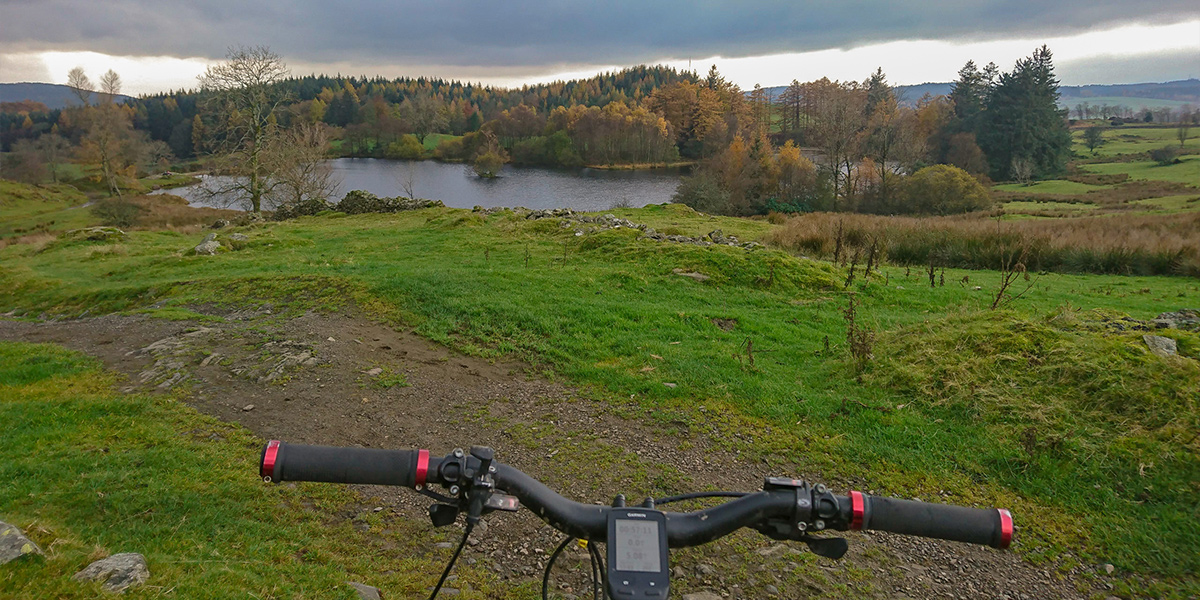 Handlebars with lake in background

Continuing further across the ‘plateau’ the route undulates along the gravel track. After approximately 0.5km you should reach a gate, from which Wise Een Tarn can be seen. In wetter conditions, the small dips can become quite boggy as the stream from The Scale Tarn (right) to Wise Een Tarn (left) gets larger. 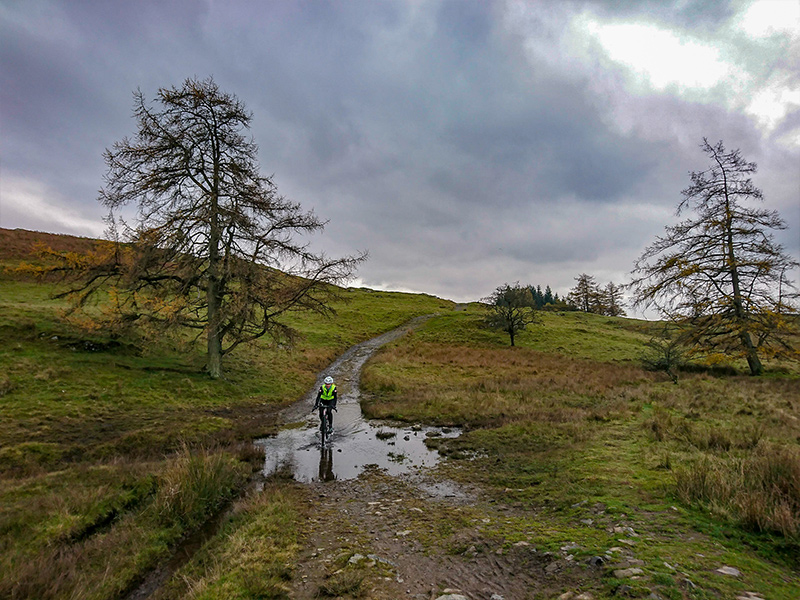 Riding through the steam at The Scale

The route now begins to enter the woodland again and the sustained descents draws closer. A small amount of single-track riding creates a fun twisting path through the woodlands, before opening out onto larger gravel descents.

There are numerous options on the descent; either taking fire roads down for a more gradual descent, or taking the direct routes down slightly steeper terrain. Both bring you out at the same place - a large layby on the forest track just south of Nor Moss. This route (and the GPX file) take the more direct route down.

After reaching the layby, follow the main fire road all the way back down to the road. Take a right at the road and continue descending to your car at Red Nab. 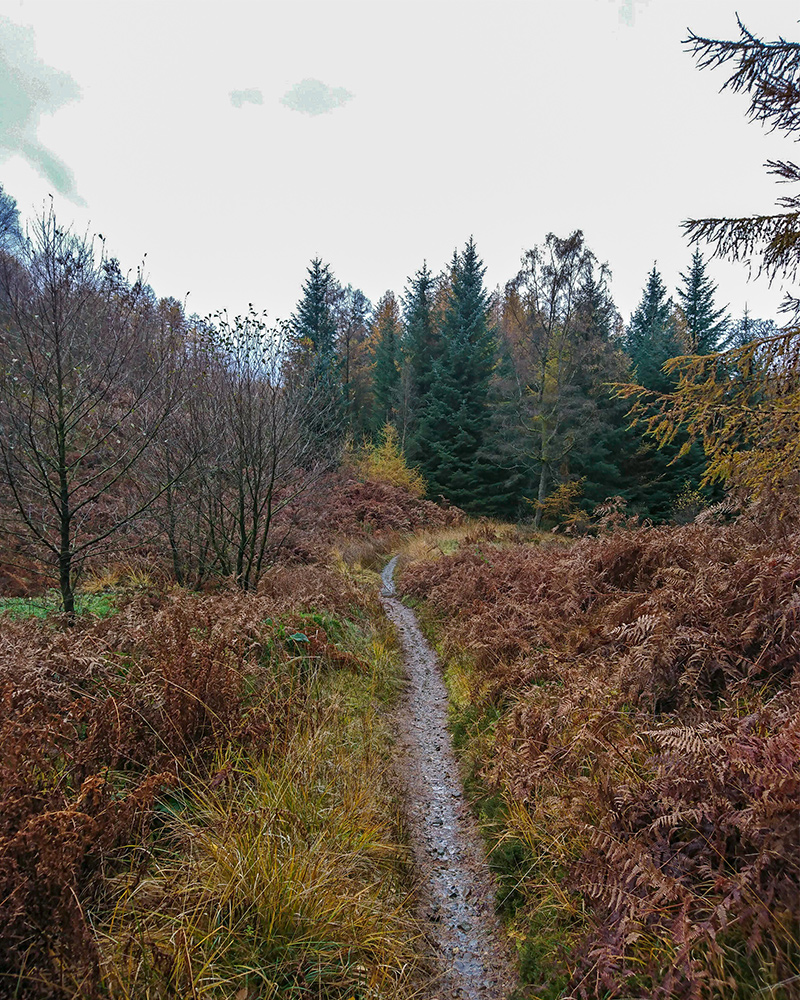 Click the link for more adventures across Great Britain. Or find out more about TwoTravlrs adventures here.

For access to half-a-million ready-made routes check out OS Maps.