Part 2: When you #GetOutside in the UK, you expect to see plenty of native birds, squirrels and rabbits, and if you are lucky a roe deer or even a badger – but there are plenty of weird, wonderful and scary wild animals if you know where to look…

Sika Deer originate in Japan, and were introduced via a private deer park in 1860. There are small colonies of these deer across the UK, but most live in the Scottish Highlands.

Sika are similar in size and coat to native Fallow deer, but darker. They are reddish-brown to yellow-brown in colour with a dark stripe on the spine surrounded by white spots in the summer. In winter, they change to dark grey to black and the spots are faint or absent.

To help keep populations to a manageable level, Sika Deer are open to hunters, in season.

African Clawed Toads (or Frogs) were probably originally brought here to use as a living pregnancy test (follow the link for all the weird details).

These aggressive amphibians have a flattened body, top-mounted eyes and distinctive webbed and clawed rear feet. They will eat almost anything they can get in their mouths, which can devastate native animals, especially other frogs.

Not only are they long-lived (up to 14 years), they seem to be able to survive the relatively cold temperatures in Britain well considering their native habitat near the Sahara.

As well as their predatory appetite, they can also carry a fungus that severely affects other amphibians. Due to their impact, sightings should be reported to DEFRA.

Red-eared terrapins are often bought as small cute pets – but they can grow to the size of a dinner plate, have a powerful bite and can live for 40 years, so many are released into the wild as they get older.

They are omnivorous, and will feed on plants, fish, insects, eggs and even young birds, so are considered a threat to native wildlife. It was initially though that, while they can survive in this country, it was too cold for them to breed, but there has been some evidence of young appearing in canals in London and Southampton.

They spend almost all their time in the water, but on a hot sunny day you may see them basking in the sunlight – they are recognised by the distinctive red stripes on their heads.

Killer shrimp (Dikerogammarus villosus and Dikerogammarus haemobaphes) are native to Eastern Europe, and are considerably bigger and more aggressive than native shrimp. They live in fresh water, and are known for killing other small animals, such as water boatmen, dragonfly nymphs and small fish, even when they don’t need them for food.

They are fast growing and fast breeding, so this relatively new invasive species is thought to be a threat to native species.

Spot them in fresh water, or by using a net. They are distinguished from native species due to their unusual size – up to 30mm long.

Goldfish: all over the UK

Goldfish can live for over 10 years and grow to 40cm – too big for many domestic tanks. While they will live happily in a garden pond, many have escaped or been released and live in freshwater lakes and ponds.

When in the wild they may revert to a more natural darker colouring, but can be distinguished from wild carp by the lack of mouth barbels. Keep an eye out for a flash of gold when walking near rivers and ponds.

You may remember stick insects from biology classes, or even have kept some as a pet. If you do, you’ll know that when they are not moving they can be very hard to spot. They will cling on to a plant and look like nothing more than a bit of dry twig.

Several species are living in Devon, Cornwall and the Isles of Scilly, thought to have hitched a ride on plants brought back from their native New Zealand. Unlike some animals on this list they seem to have integrated well into the local ecosystem, and live happily munching on bramble or privet.

Spotting them can be a challenge, but you will sometimes find them basking in the sun on walls or rocks which makes them much easier to find.

Scorpions get bad press – few are aggressive or even particularly dangerous. The European Yellow Tailed Scorpion is the only one to live in the UK, and has survived around the warm south coast for at least 150 years.

They can be found living in cracks in rocks and on warm, south-facing walls around Sheerness docks, as well as in smaller numbers in other southern ports. They are 3 – 4 centimetres long, with yellow tail tip and legs. Unusually, they glow under a UV light so you can use this to spot them more easily at night.

They mainly eat woodlice – and their sting is roughly equivalent to a bee.

Both species are known for aggression and a powerful bite. Luckily those found so far in the UK are fairly small escaped or released pets, but as they continue to grow throughout their lives they can get very large indeed.

If you do happen to come across one keep your fingers well away!

Independent: Look out! Abandoned terrapins about

The freshwater Chinese Mitten crab most likely hitched a lift in trading ships bilge tanks, and first appeared in the Thames in 1935. It has now spread to other rivers including Humber, Medway, Tyne, Wharfe and Ouse – their ability to cover large distances on land has helped them spread effectively.

They are named after their distinctive hairy pincers (they have hairy legs too), are a dark olive green and can grow up to 8cm wide.

They can cause considerable damage as they burrow into soft river banks and disrupt local ecosystems, so if you spot one you are asked to report it at mittencrabs.org.uk.

One possible solution: in China they are seen as a delicacy, and they apparently make a decent soup.

Get the recipe here

This is a rather cute looking beetle with long, striped antenna that can be up to twice as long as the 2cm to 4cm body. They are black or very dark brown with white spots, and are native to China and south-east Asia.

While harmless to humans, they do have a taste for deciduous trees. The adult beetles lay eggs on the bark which hatch into larvae, who then will chew their way into the tree, often killing it. The larva leave large exit holes, around 1cm across, considerably bigger than most native species.

Due to the damage they can cause to forestry, anyone spotting a beetle or the distinctive holes is asked to report it to the Forestry commission.

We’ve included big cats, but with a warning. While there have been a lot of reported sightings – and some slightly hysterical reporting – so far there is no clear evidence of any big cats living wild in the UK.

However, there have been persistent sightings, in some cases going back decades, of large cat-shaped creatures stalking the country. So are these just large domestic or feral cats? Are they misidentified dogs or foxes? Or could there really be escaped big cats, such as panthers, surviving in the wild?

Or is it all a clever promotion to promote these areas? Why not judge for yourself – or even go out and find proof!

How many of these have you spotted? Tell us in the comments below.

Also read part one for more cute, weird and frankly terrifying animals you would not expect to see while out for a walk in the British countryside. 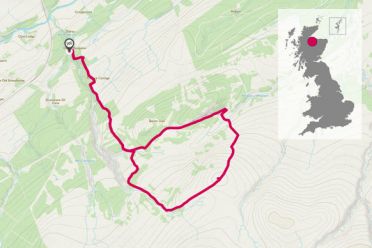