Cliffs, coves and impossibly pretty ports – the South West Coast Path draws many an excited hiker to western shores. But you don’t have to embark on the full 630-mile trail to revel in its glory. Because a wealth of day-long, circular walks will also put more than a little spring in your hiker’s step and a gleam in your eye. Devon-based Ordnance Survey GetOutside Champion Belinda Dixon outlines three of her favourite SWCP day trails.

Especially in the summer, everyone wants to be in Salcombe. The chic yachting haven charms all comers – from millionaires to day trippers - thanks to winding streets, smart shops and sandy shores. To get the most from your visit it’s best to enjoy the town then head out onto the coast path for an altogether different scene. Our route winds south, taking in coves, cliffs and wide, wide views – bring your swimsuit.

Start in the centre of town, perhaps stocking up on picnic supplies at the Salcombe Yawl or the other delis in Clifton Place. Head beside the water to Whitestrand Quay, then stroll up Fore Street, taking the chance to nose into the tiny lanes cutting towards the shore. The route you’re now on runs parallel to the water and gives broad views of the parade of river traffic and the sandy beaches lining the opposite bank. Soon you’ll come across one of your own – tidal North Sands; if you’re keen for a dip, hold on – your path snakes up then down to South Sands; still tidal, but often a better beach from which to swim. Look out for the eccentric ferry landing platform, here Bo’s Beach Café is a great espresso and cake stop. 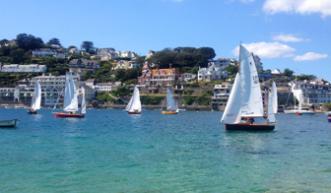 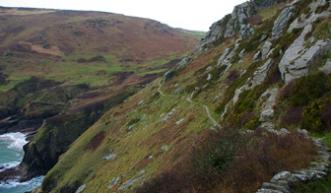 Next there’s a sense of leaving the town behind as your route emerges onto the open coast path – soon you’re traversing a section with fantastical rock formations and sharp drops, en route to rugged Starehole Bay. Next it’s an exhilarating trail around dramatic Bolt Head, before cutting north, inland, to walk between fields and down rural lanes. Eventually, you dip back into North Sands via little-used footpaths. To delay a re-connection with the holiday bustle keep an eye out for footpaths cutting left which lead towards town via a series of steps - or just stroll beside the water drinking in those million-pound views. 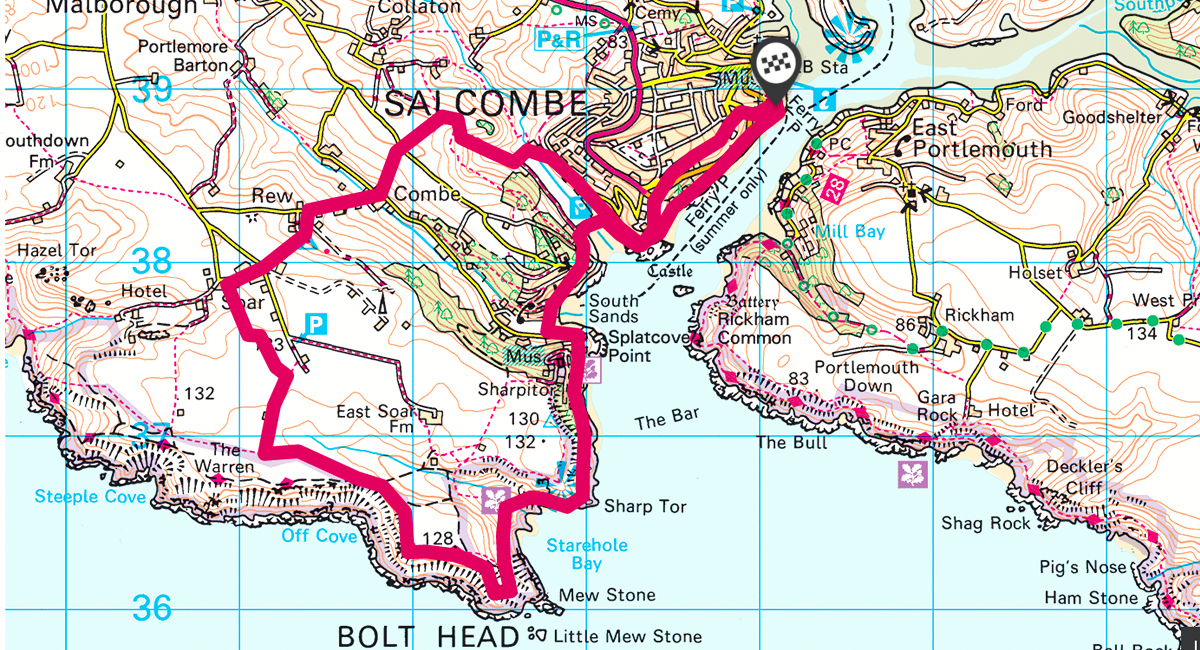 ​Valley of the Rocks to Watersmeet

Exmoor beckons you closer, with its broad, russet moors and steep-sided valleys dense with trees. Here the coast path hugs precipitous cliffs; it’s as if it doesn’t want to miss a trick – or a view. 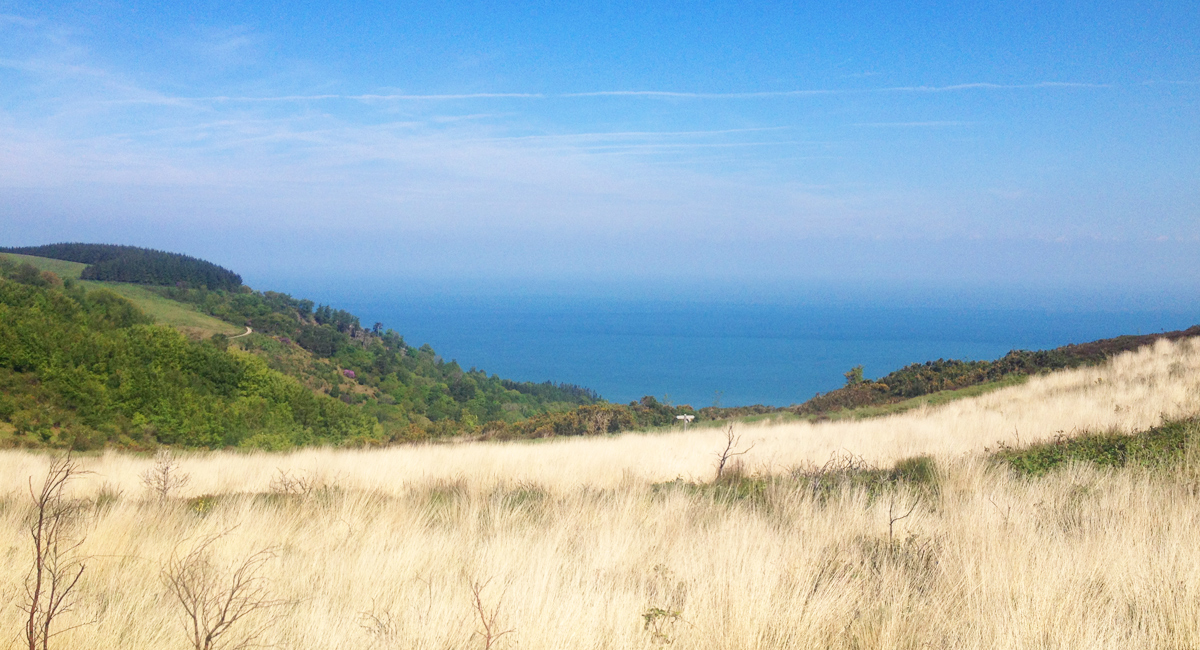 And who can blame it – the shoreline plunges into a surging sea, dappled paths wind inland onto riverside trails. This walk links two of the Exmoor’s major drawcards: the Valley of the Rocks and Watersmeet. You can drive to either beauty spot, but – as ever – walking the trails between them brings infinitely greater rewards.

Although we’ve shown the route as one continuous walk, it’d also be ideal as two separate hikes - either spend a half day on each, or perhaps tackle them on different days.

We start and finish in the pretty port of Lynmouth, a summer-time tourist honeypot thanks to a spectacular setting between rushing rivers and soaring hills. From here you hike (or take the delightful Lynton and Lynmouth Cliff Railway) up to the town of Lynton.

Lanes and paths lead you to the spectacular Valley of the Rocks, where towering geological formations loom up on all sides. Take in the rugged scenery here, looking out for the famously feral goats, then hike back to Lynmouth along inland trails.

After lunch in the village (try the Bath Hotel’s Ancient Mariner bar), chart the course of the East Lyn as it cascades through a dramatic river gorge to Watersmeet. 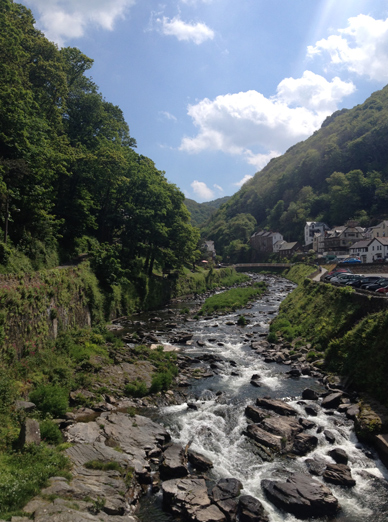 At this magical spot hunt out waterfalls and the National Trust tea room. From here you can retrace your route beside the river, or climb to 263m on the spectacular path up Myrtleberry Cleave. It’s gorgeous either way. 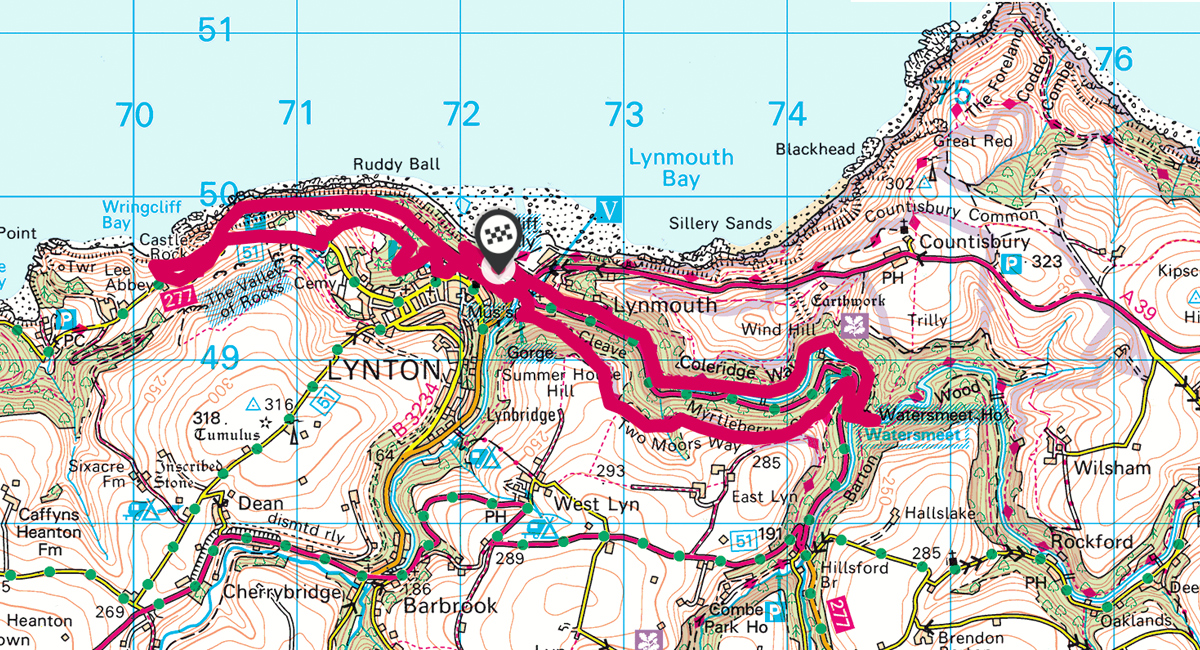 In south Devon, Dartmouth captivates – a photogenic port full of ornate, 16th century buildings overseen by a grand Royal Naval College set on a hill. The irony is though, if you’re in it you’re not really looking onto it – instead you’re gazing towards pretty Kingswear on the eastern bank. Which is where this hugely satisfying coastal walk starts. Head for Kingswear’s lower ferry quay – in the summer you may like to head into Dartmouth itself (perhaps via the Park & Ride) then cross over to Kingswear by the frequent ferries. Looking out to Kingswear

From there, pick up the South West Coast path east, a route that initially leads up winding steps and along narrow lanes before snaking between enviably lovely houses.

Keep an eye out here for yachts below and 600 year-old Dartmouth Castle on the other bank. Soon your path emerges onto an open landscape of fields and wide sea views – pick a fine summer’s day to be dazzled by blue sea and yellow gorse. It’s an undulating path, regularly rising to 70m and falling to near sea level via steep stretches and steps. 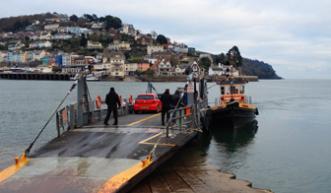 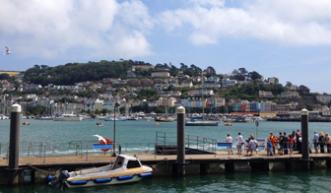 Inner and Outer Froward points pass by, providing fine views of the Mew Stone rock outcrop just off shore. After Pudcombe Cove you have a choice of routes. The best option is to enter the National Trust’s Coleton Fishacre estate. This path (shown on our map) leads up through gardens that are a riot of colour to a 1920s Arts and Crafts house that was once home to the D'Oyly Carte opera impresarios. Naturally, it has a fine tea room. If you’d rather not go into the property, a footpath cuts north from the shore just before the gate to the house.

After emerging from (near) Coleton, you head down rural lanes, past fields and in sight of gorgeous views, before picking up the coast path back to Kingswear. Kingswear and Dartmouth have of plenty of places in which to refuel. Do you have a favourite walk along this stretch of coastline? Let us know in the comments below. Find more great walks in Devon in OS Maps.

You can find out about Belinda's adventures at belindadixon.com/blog.