Sarah Stead was nominated by several of her OS work colleagues to be a #GetOutside Champion thanks to her inspiring, positive personality and can-do attitude. She’s always looking to challenge herself with outdoor pursuits and she has pledged to run, cycle, climb and walk as much as she possibly can this year - and blogging her adventures.

Sarah Stead was nominated by several of her OS work colleagues to be a #GetOutside Champion thanks to her inspiring, positive personality and can-do attitude. She’s always looking to challenge herself with outdoor pursuits and she has pledged to run, cycle, climb and walk as much as she possibly can this year. She’s blogging her training to show what’s possible if you set your mind to it and is a particular inspiration to the younger, female generation.

How does it feel to have been chosen as a #GetOutside Champion?

I’m loving it. It means I now have a valid excuse to talk about all these amazing experiences and encourage people to #GetOutside and join in with the fun [mad] things I like doing.

What are the benefits to you of being outside?

I have a constant case of itchy feet. Being outside means that I’m satisfying that need to just explore and do something. How much can you really discover wandering around inside after all?

What do you most enjoy about being outside?

I like finding things and noticing things that you wouldn’t otherwise see. It’s the little things that just bring a smile to your face and it’s a nice bit of escapism.

What’s your favourite terrain to get out in? (Mountain / coast / woodland etc)

Do I have to pick one?! I’ve grown up by the sea so there’s something of home in that landscape for me but then I like the novelty and the difference of the mountains because they’re so rare to me. And then there is something very peaceful and idyllic about wandering through woodland – you might never see another person. For me it’s all about the different ways that they affect my senses – different sounds of different animals, wind rustling through leaves or waves over pebbles. Or the endless expanse of huge mountains that touch the sky. They’re all so different and affect me so differently.

What’s your best memory of being outside?

Loads of things are standing out for me! I guess the most different one for me would be sailing down the Inside Passage from Alaska, down the coast of Canada, to Washington. I was sleeping on a sun lounger on my last night with the stars directly above me but in the distance, so far it was silent, was a storm with lightning strikes going mad across the sky. It was spectacular. Utter tranquillity above me and in the distance along the horizon was one of the most chaotic storms I had ever seen. Things like that which you never expect to see just take your breath away and inspire and calm you at once. It’s an incredible feeling.

This is a hard one, because genuinely I can’t think of a bad experience that has stayed with me. Perhaps occasions where I’ve been scared because I did something silly that could have been dangerous (such as getting stuck in sinking mud as a child). But they are all experiences you learn from so it can’t be all bad.

What’s the most unusual thing to have happened to you outside?

A real-life David Attenborough moment when camping and hiking in Denali National Park, Alaska. My friend and I had found a different trail and started up the path towards a river bed only to come across (several yards ahead) a caribou carcass with a wolf and a bear facing off against each other. We decided at that point to turn back before we were spotted. In doing so we headed back towards a busier route which opened out further upstream on the river bed. As it was summer the stream wasn’t too large so we decided to walk alongside it. At that point we came across another bear, who as soon as it spotted us went up onto its hind legs. Our only way of escape now was to cross the river (which had come from a glacier so was utterly freezing) to put as much distance as possible between us. Definitely a wild adventure!

Where is your favourite place in Great Britain to be outside?

If I want peace and quiet then a nice beach to sit on once all the tourists have gone in the evening is ideal. Or getting out to the countryside where you can’t see another soul for miles and miles is amazing as well. I’m using my position as a #GetOutside Champion as an excuse to start seeing more of our incredible country. I don’t think I’ve yet seen the best of what it has to offer, and quite often the offering is enhanced by the experience you have out there. It’s best to explore everywhere!

What are your favourite outdoor pursuits?

I do a lot outdoors. For one thing I play hockey which obviously has certain requirements (a pitch for a start) but it’s great and sociable and really fun. But for exploring - running, cycling and hiking are ideal and you can go as fast or as slow as you want depending on whether you’re out for the physical challenge and the fresh air in your lungs or the view. Recently, however, I’ve got into bouldering as part of my #GetOutside Pledge, and I’m now learning to climb properly and then try it outdoors so who knows where that may take me.

How would you describe the feeling being outside gives you?

It relaxes me. Even when I’m doing something really active which gives me adrenaline I’m still calmer somehow. I couldn’t tell you why or how but it’s definitely a good thing to have in modern life.

When you’re outside how do you change as a person?

Weird though it sounds I think I’m more myself. I’m more laid back but can be decisive about what I want to do and where to go. It gives me confidence which I don’t necessarily have in other areas.

Why should people #GetOutside more often?

For the love of it! To feel better, sleep better, all the usual health reasons everyone cites. But if people just take a 10 minute walk at lunch each day they’ll feel so much better for it; it’s definitely worth a go.

What would you say to someone who never goes outside to get them outside?

Why as a nation are we not getting outsideas much as we could?

I think we live busy lives, we don’t have time. Most people feel they need to make time to relax and I think that’s mostly seen as sitting down and doing nothing because the rest of the time we’re always doing something. Sometimes though, if you get outside that’s the best way to do nothing (especially when the weather is good). I think the weather holds a lot of people back though. If we describe it as ‘miserable’ and ‘dull’ it doesn’t really encourage you to #GetOutside.

What are the most important things a person should do or take when they #GetOutside?

Obviously a map, compass and phone if you’re venturing to parts unknown. But I think a camera is good one to take, just in case! And plenty of food and drink to keep you going.

What tips or pieces of advice would you give to someone who wants to get more out of being outside?

Just go for it. There’s never a good reason to not do what you want to do, even if you have to delay it slightly. Each time go with no expectations and just take a sense of adventure and fun and you’ll get more and go further (both physically and mentally) than you might think.

Before you became a #GetOutside Champion, describe your relationship with Ordnance Survey?

As an employee, I love how the team and everyone who works with Ordnance Survey has such passion for it. I love that it has a heritage that takes you back to the early days of wandering outside for leisure and that everyone gets behind that ethos so much.

What music do you listen to when you get outside / does music inspire you?

When I’m hiking I don’t tend to listen to music; though we might play a game of guess the tune as we go along! Or start singing randomly (often weather-related songs if I’m honest!). When running it’s anything that will motivate me to move faster and work harder, so it could be a bit of pop, rock, jazz, latin or dance. Anything goes.

What are your backpack essentials?

Obviously my navigational tools, a spare waterproof and warm layer (which never goes amiss) some decent energy food and drink and usually my camera. As long a I have those when hiking I know I’ll be alright.

What’s your favourite food when you are outside?

It depends on the activity but I do seem to have developed a habit for creating a roll filled with cheese, chorizo, olives and rocket. I love the flavour and it really keeps me going. I’ve even had that for second breakfast on top of Pen Y Fan on a gorgeous sunny day.

Most people who enjoy the outdoors seem to have better health and care more about the world they live in, which can’t be a bad thing to have surely? I’m sure if we all took the time to enjoy what the great outdoors has to offer we would probably care more about what we do to the world and take better care of it. 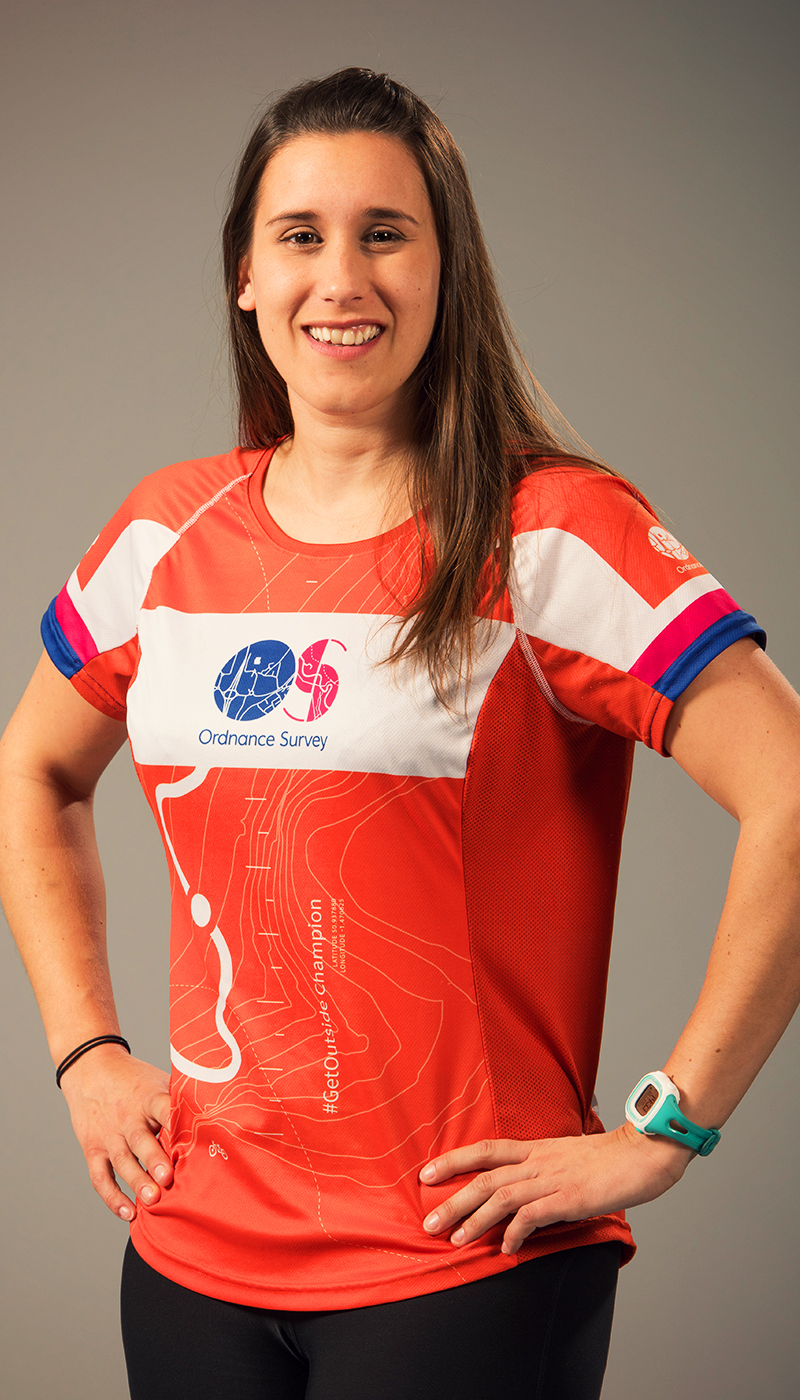 Now the clocks have changed, make sure you're safe cycling in the dark with Helen Pollard's top tips.

Celebrate the 950th celebrations of 1066 with English Heritage

Find one of the 1,066 arrows hidden at English Heritage sites to claim prizes ranging from a private tour of Stonehenge to hundreds of cream teas.