Dave Hamilton, author of Wild Ruins BC, the Explorer’s Guide to Britain’s Ancient Sites, tells us about some of his favourite days out amongst the stones and earthworks of pre-Roman Britain.

It is possible to take in Anglesey’s most important ancient sites in a day but to really soak them all in, a weekend is perhaps better. Bryn Celli Ddu is the unashamed poster boy of ancient sites, a Hobbit-hole-like burial tomb in the south of the island. Yet, for me, the two jewels in this island’s crown sit in a quiet corner, a little inland from the North East Coast. 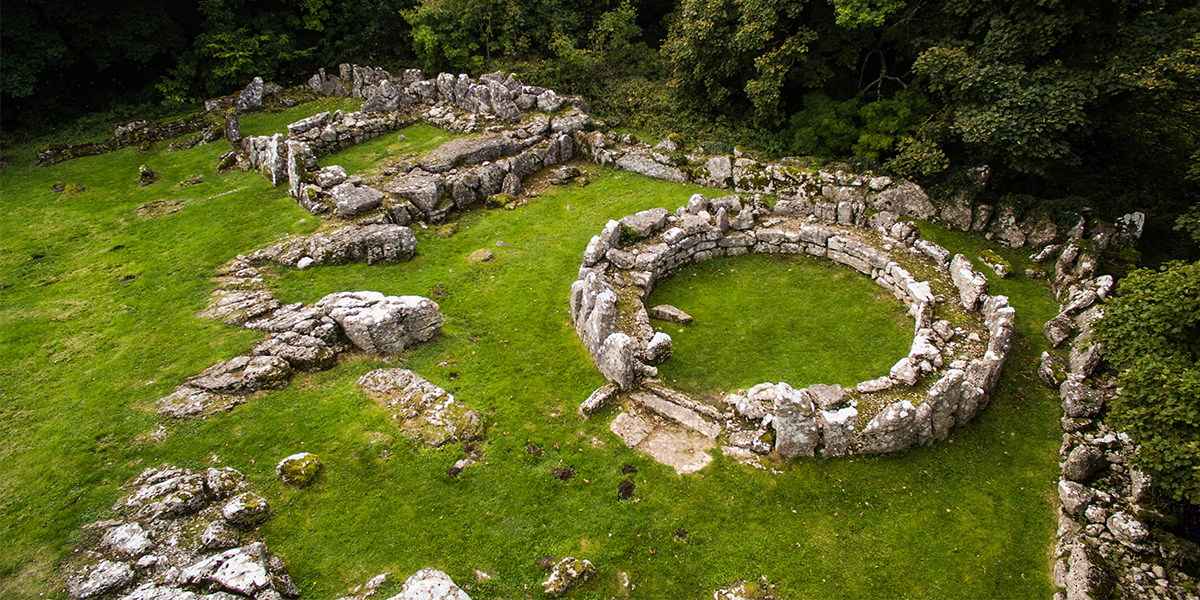 The first is the Lligwy Burial Chamber 53.349934, -4.252696, a dolman with one of the largest capstones in Britain. This single slab is nearly 6 metres long, over 5 metres wide and weighs an estimated 25 tonnes. Close to the burial chamber, hidden in a grove of trees is the Iron Age village of Din Lligwy 53.350366, -4.259479. This would have been home to a small farming community and there are signs of metal working having taken place in the settlement.

At the Paradwys Chapel roundabout of the A5052/A5108, SW from Moelfre take road NW just off it signed Traeth Lligwy and Din Lligwy. Follow the road ½ mile ignoring gateways on bends – a kissing gate and notice board for the dolmen will appear on the L, but drive on 300 metres for more parking space by the gate to Lligwy Chapel and walk back. Bus 62 from Menai Bridge to Llanallgo Capel Paradwys stop.

A little inland, between Abbotsbury and Little Breedy is set of ancient monuments, densely packed close to the Dorset Ridgeway Path. 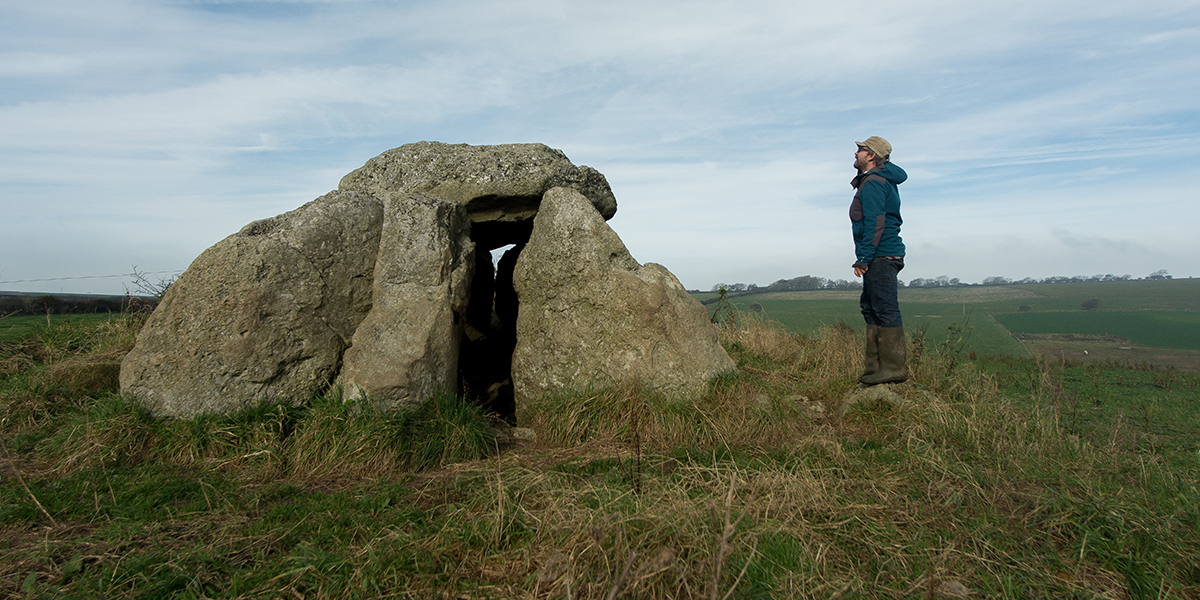 The Valley of Stones nature reserve 50.6828, -2.5735 is also close by and easy to incorporate into a round route. The valley is home to countless sarsen stones deposited here towards the end of the last Ice Age. On a warm day the flowers attract the rare Adonis blue butterfly.

The X51 and X53 buses get you close to the sites, alight at the Coach and Horses stop and plot a route to the site. Or take the main road north of Portesham, turn left at the crossroads, as a lane splits to the right find a spot to park and plot your route using an OS map.

A 3.5-mile walk from the nearest road, through untamed wind blasted moorland stands the rocky outcrop of Carn Geodog. This remote site, just off the Golden Road, a high ridge path in the Preseli Hills, has recently been confirmed as the source of the smaller inner circle of Stonehenge (referred to as the bluestones). The path can be challenging to navigate, especially if the fog starts to come in, which it inevitably does in this part of the world.

Yet, once you come face to face with the quarry site, you cannot help but be struck by the monumental effort that must have been needed to move these stones 150 miles to Stonehenge in the East. 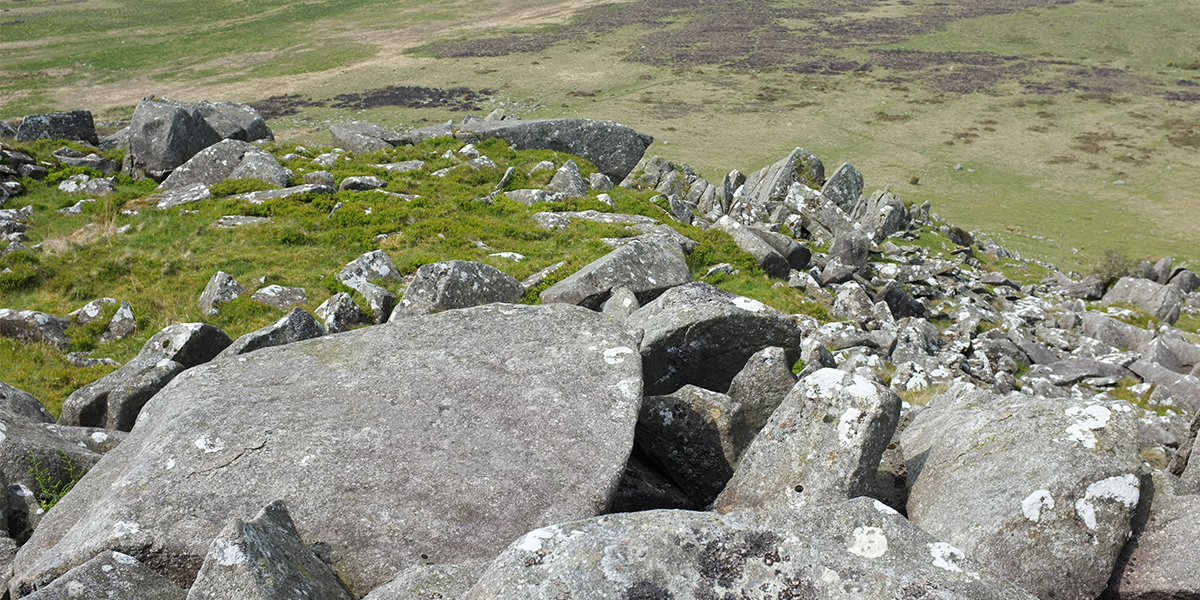 On a clear day, the rocks make for an excellent lookout across the landscape and on a foggy day, they can be a welcome respite from the hostile weather. Also, off the Golden Road is the stone circle of Bedd Arthur. Some schools of thought suggest that the bluestones may have resembled this stone circle, serving as an associated monument to it, before they were shifted across land to Wiltshire.

Blawearie Cairn is just one of many ancient remnants, a short walk up hill from the remote village of Old Bewick in Eastern Northumberland. This Bronze Age relic consists of a ring of upright stones enclosing smaller pebbles and two cists (a stone coffin-like structure). This was home to several human burials along with their associated grave goods, such as jet and amber necklaces.

Not far up from here, you’ll find the romantic ruin of Blawearie House surrounded by the exposed rock which provided the raw material for the dwelling and cairn. The route circles back round toward Old Bewick via not just one but two Iron Age Hillforts. Although both are worthy of your time if you are pressed, head for the larger of the two, closer to the village. On rocky outcrops toward the east of the fort, are cup and ring marks, an ancient form of rock art or early writing. These etchings could predate the fort by as much as 1000 years and their meaning is so far unknown.

Park where you can in the village without obstructing traffic (ask if in doubt). Follow the footpath to the North. It is about a mile up the sometimes-muddy path to the cairn, situated on the left amongst the heather. The ruin is easily spotted from here and forts are visible in the landscape.

Along with the Inner Hebrides much of the Ardnamurchan peninsula was formed by immense volcanic activity when the European and North American plates separated, opening up the Atlantic Ocean. This unique geology makes for strange, somewhat barren and almost treeless, alien landscape quite unlike anywhere in Britain.

Yet, with its white sandy beaches and crystal blue seas it is undoubtably one of the most beautiful parts of the country.

On the shores of this peninsula, close to the famous Sanna beach, the ruined walls of Rubhaan Duin Bhain promontory hillfort look out over the islands of Eigg, Muck and Skye.

Little is known about the fort, which adds to its charm. It would have once watched out over boats coming in from the western seaboard but today it stands guard over passing sea eagles, basking sharks and the occasional dolphin.

From Kilchoan follow the B8007 N then take R for Sanna and follow just over 4 miles to the car park R. From here follow the track across the bridge to towards the north shore and make your way around the headland to the E the best you can. It can get very boggy underfoot so bring along walking sticks and welly boots. The fort is on a rocky promontory due N of the carpark, and is marked by a modern cairn (pile of stones). 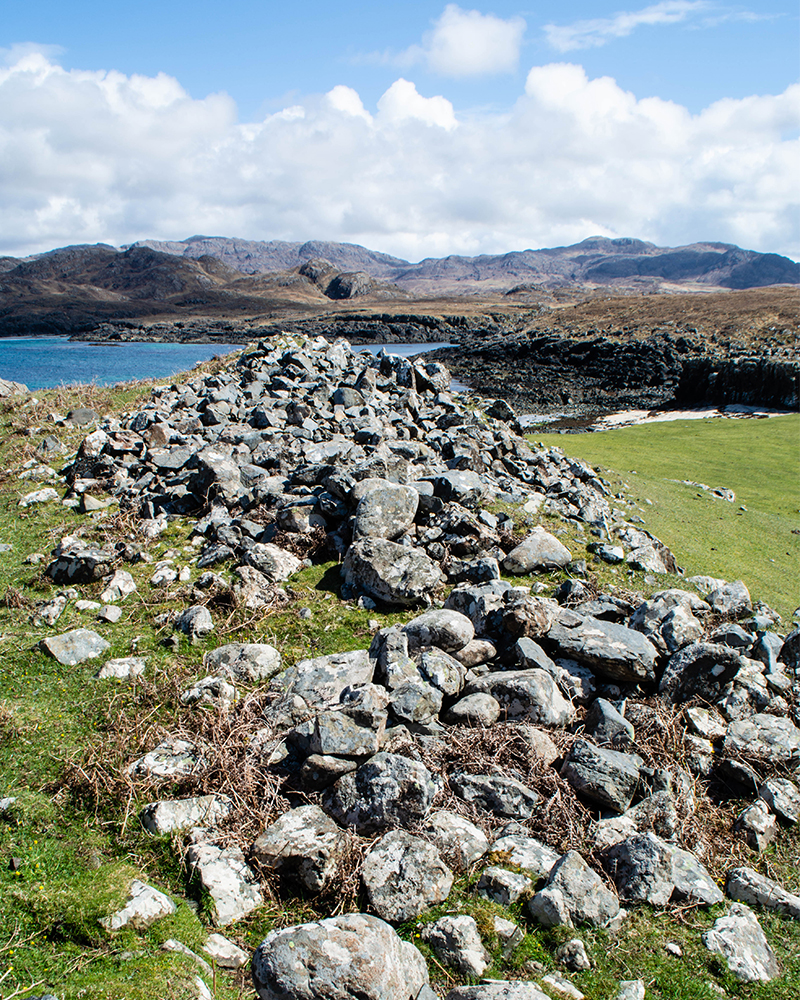 Brochs have been described as the castles of the Iron Age. They were large hollow-walled buildings, shaped like a modern-day cooling tower and often placed in strategic locations. Mostly found in the North of Scotland and on its surrounding islands, it has been thought they were home to a tribal elite, the first Lairds and Lords of these isles.

However, without any definitive evidence we will never know their true purpose. 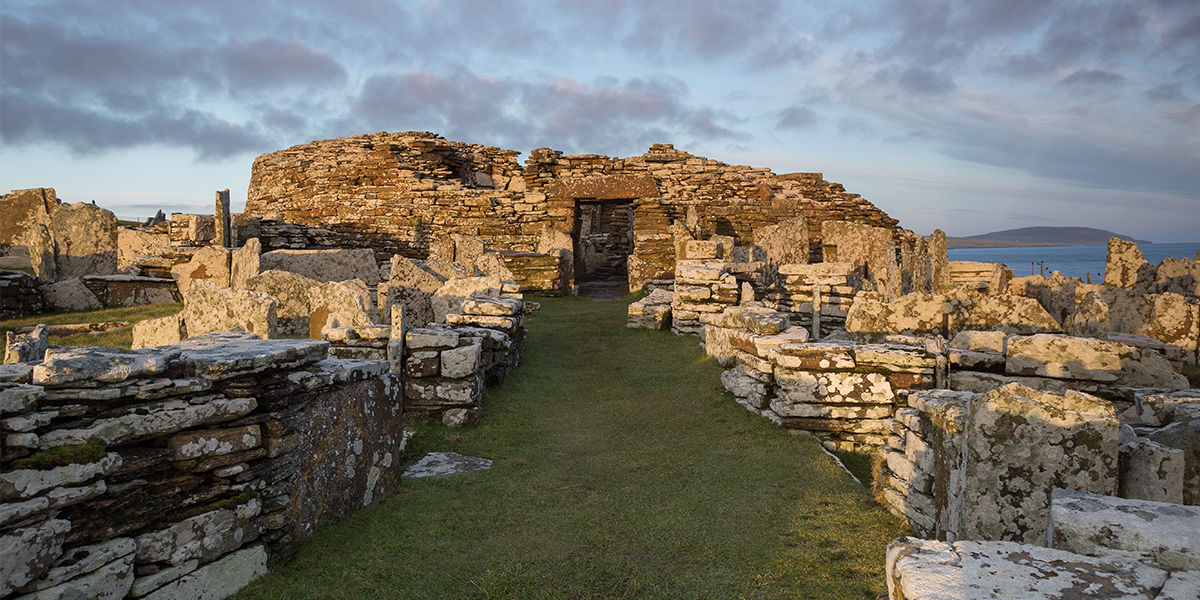 Despite their age, around 2000 years old, many brochs are remarkably complete. For example, Mousa Broch (HU457236) on the Shetlands is over 13 metres tall and Dun Carloway on the Hebrides has over 9 metres of its original wall still standing. My favourite broch, the Broch of Gurness, on Orkney Mainland is surrounded by the footings of a broch village.

Although the walls do not tower as high as Mousa and Carloway, there is enough to get a clear picture of what the structure may have looked like. What also makes Gurness particularly special is that an inquisitive family of seals watched over it. I walked up and down the shore for a good hour as their watery black eyes stared back at me.

On the A966 in the NE, to the E of junction with B9057, take the turning opposite Evie Community School signposted Broch of Gurness. Follow the road as it bends L then R to the Historic Scotland car park and visitor centre.

Buy your copy today and receive 20% discount and free P&P using the discount code 'OS19' at the checkout. 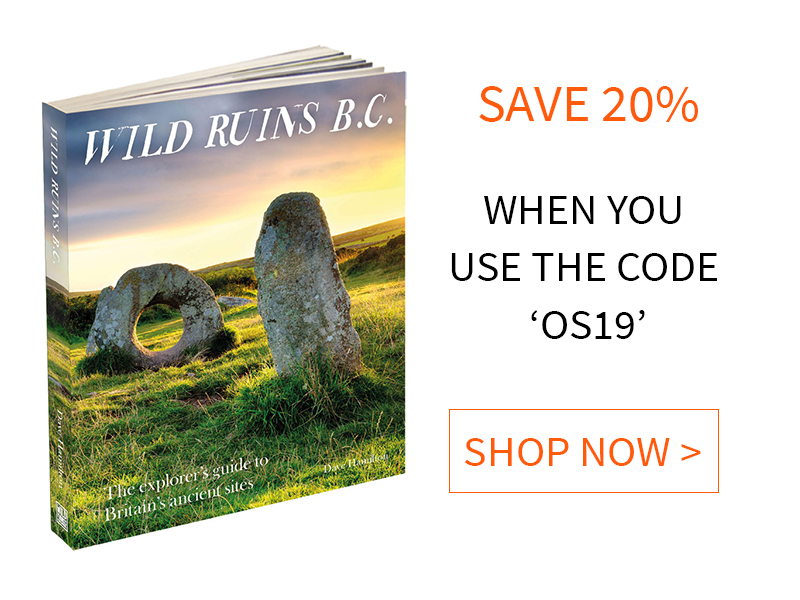