Tom Bailey explains how you can use techniques used by Special Forces to enhance your safety on the hill and be aware of sensory experiences you might have otherwise missed. 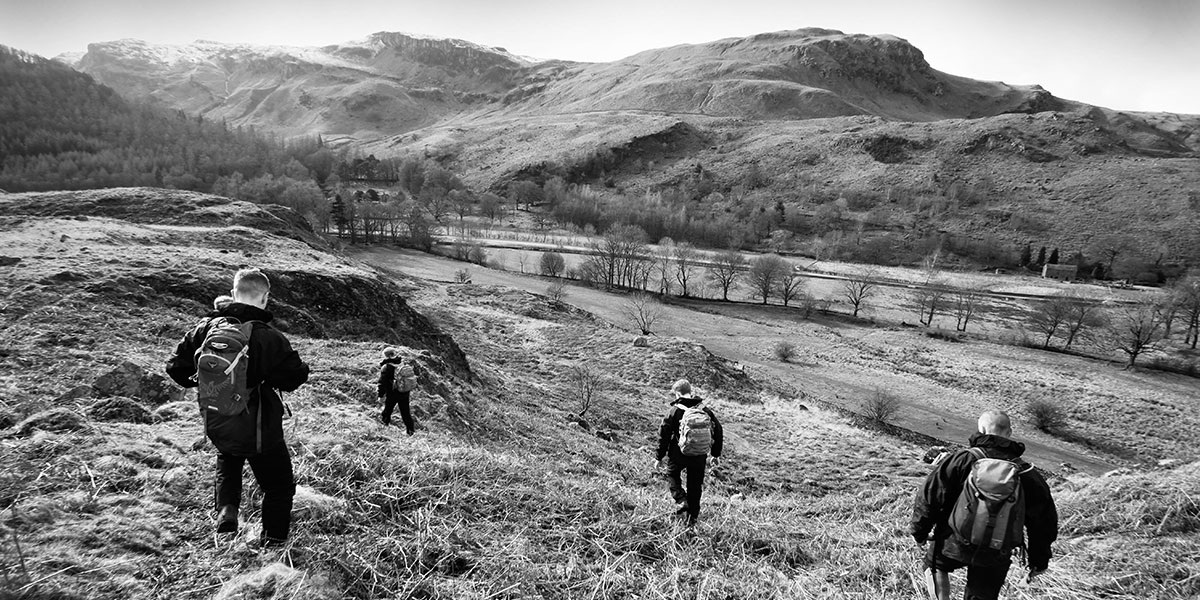 Training in the Lake District

An air-splitting roar and the morning has been violated. Five men sink to one knee; “C’mon boys, I want the aircraft type, time and vector, this is vital intel.” For trainee Special Forces troops, four F-15s putting in an unexpected appearance is a nerve-straining experience these guys need to be well equipped for. We’re on patrol, not four hundred miles behind enemy lines but just north of Thirlmere in the Lake District. This is a Special Forces Advanced Navigation Course.

Run by the co-founder of The Ultimate Navigation School (UNS), Lyle Brotherton, Special Forces (SF) represent the sharp end of the charity’s repertoire. From Brownies to Scouts, from walkers to Mountain Rescue teams to SF aspirants, Lyles’s school can train them all. 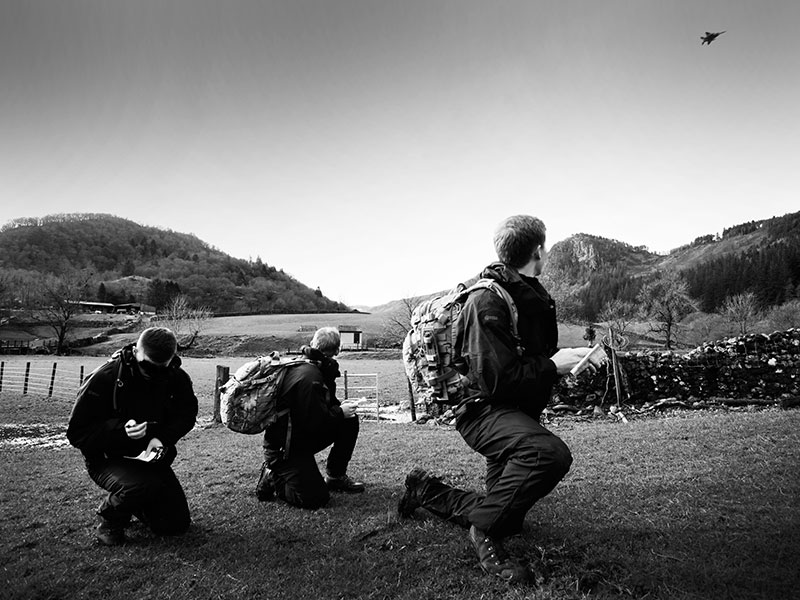 For those of you that don’t know, the SF (SAS, SBS, SRS) are a secretive, highly skilled element of the armed forces, arguably the best of the best.

Their work is rarely known about outside the confines of their own elite few. Fit, quiet (mostly!), serious, dedicated and mature for their years, these are the typical ingredients that go into any SF combatant. Few pass the rigorous testing process, and those that do then know they have a great deal to live up to.

In this world of satellites, it might surprise you to know that traditional map and compass navigation has a place in the SF.

What is even more surprising is that a large number of SF aspirants (soldiers on the SF selection course) fail selection because of a navigational error. Hence the need for these training courses.

When operating deep behind enemy lines the use of a GPS device would be traceable, with obvious consequences, therefore a reliance on map and compass is needed. (Any of you out there who have done the Fan Dance event and think you would’ve made the SAS had you been in the Forces, think again. Fitness is important, but the right kind of brain even more so.) 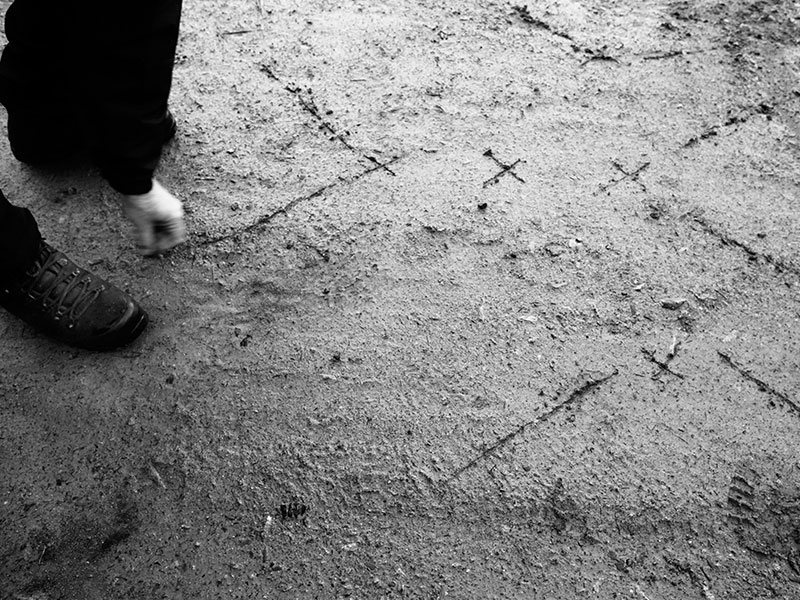 Plans are visualised using whatever is available

The first surprise is that the navigation I’m learning over the next couple of days is the same navigation I’ve been learning and using for the past 20 years. The second surprise is how that information is used. It spills over into everything they do.

A route map is issued. We commit as much of this as possible to memory before starting, anticipating what the landscape is going to look like from the map. Moving off in a patrol, in this case ‘The Nail’ (because it looks like one). Normally made up of four to five men with the navigator up front, while the ‘tail-end Charlies’ keep up the rear (in action they would be armed with a belt-fed machine gun, ideal for putting down defensive fire if the patrol got ‘bumped’).

Each of the group has a 90-degree arc of fire so that the commander is protected from all sides. 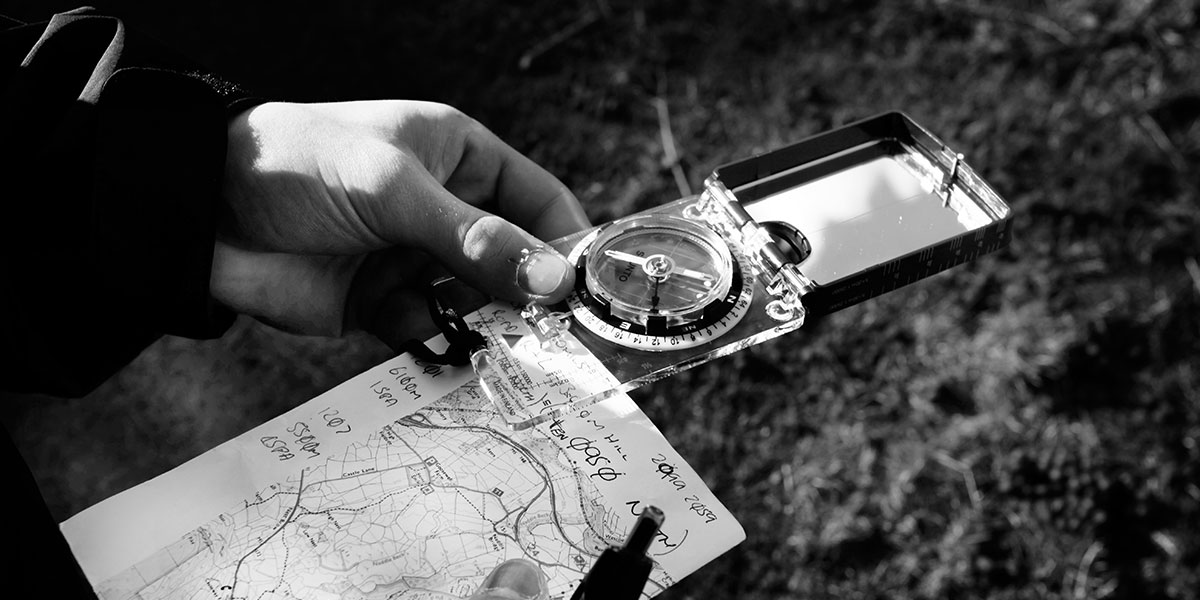 Navigation precision: map and compass still have their place

They move short distances, or legs, pausing regularly to look and listen, to read the track ahead. The boys take it in turns to sample the responsibility of navigating and leading four other men, his mates, deep into enemy territory.

Remember, this navigation could be you and your friends on any hill day; someone assumes the role of map man and leads the others on.

Would you think I was being overly dramatic if I said that this was still a matter of life or death? Most Mountain Rescue call-outs are due primarily to a wrong navigational decision.

Plastic-coated maps and wax pencils are repeatedly used to create an annotated picture of the situation. This is something I’ve rarely done. From now on I’m a convert: marking your last known position, noting down a grid reference – this is helpful information all of us with a desire to get the most out of our navigation should be using.

Sighting compasses are new to me. So is working in mils instead of degrees on the compass bezel. Greater accuracy is the obvious advantage and, again, my tool box of navigational skills is added to. 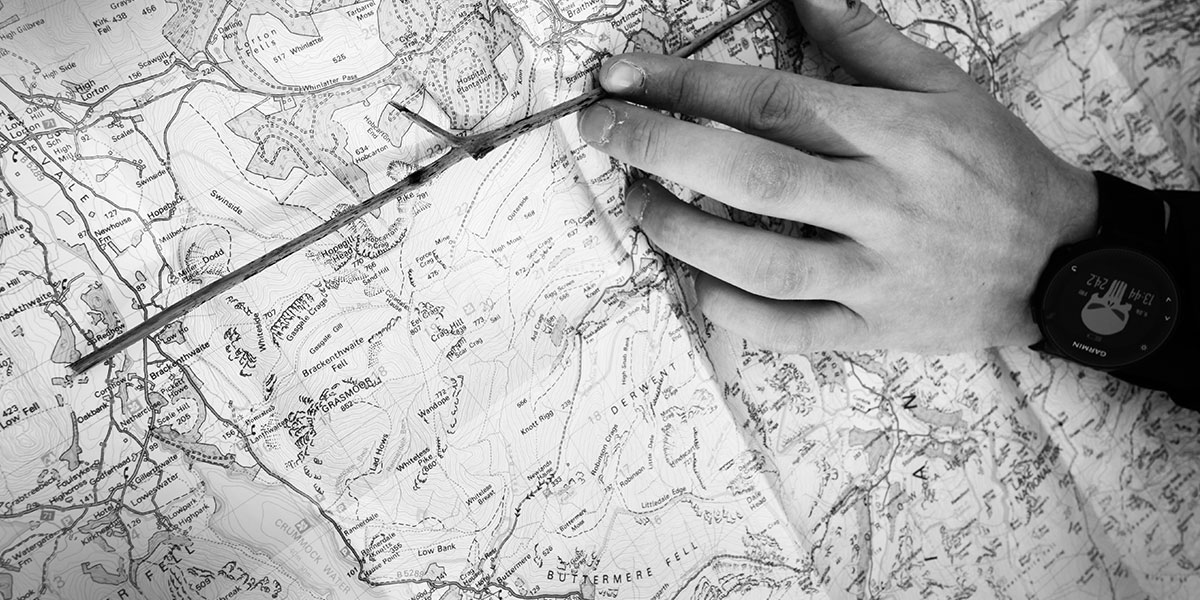 Everything can be used as a tool: from twigs to ditches

During the patrol different things ‘happen’. The first is the most shocking. I’m weaving about the patrol taking photos when the navigator drops to the floor – ‘shot and killed’ (Lyle and the chap whose turn it was to navigate had clearly prearranged this). A hand signal ripples through the formation and they instantly crouch down into defensive positions while the patrol leader decides what to do.

Navigationally they prepare for this by all paying attention to exactly where they are and where they’ve been. That way anyone one of them can seamlessly lead them on or back, or even to engage the ‘threat’ depending upon the circumstances of the ambush. Role play over, the ‘sniped’ navigator rejoins the patrol with someone else at ‘point’. 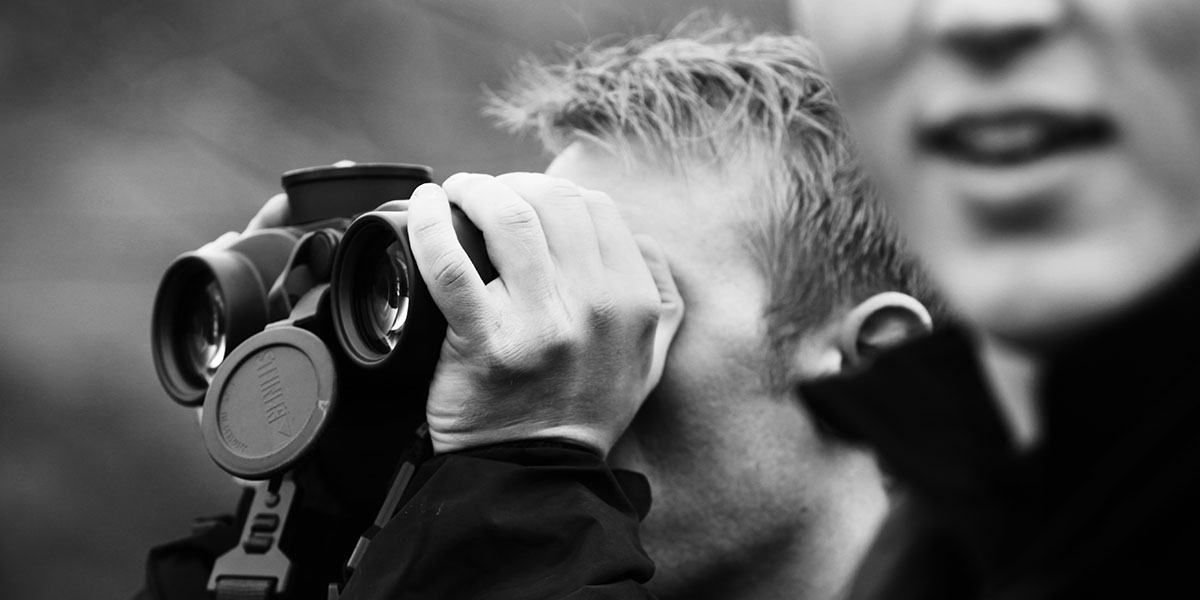 Observation is key – and not just what is right in front of you.

Hyper-vigilance is the key to patrolling. This is something that can be used by any of us to improve our experience of a day in the mountains. In the context of the patrol the senses; sight, sound and smell are the source of ‘intel’. The SF guys are wired to listen for other soldiers, aircraft and vehicles, along with birds and animals disturbed by human activity.

They listen out for natural sounds – a river, animal alarm calls – and scent even plays a part.

Do it next time you’re in the hills, be aware of as much as you can. It might just surprise you how much there is to be aware of that we are normally ‘closed’ to.

This is the sharp end. This is where navigation and tactics marry. This is what makes the Special Forces special. Five highly trained individuals acting as one, going anywhere, doing anything. Unstoppable. Needless to say, the plan is cunning and works a treat. All hostiles mopped up we move on, ever on, ever watchful.

Even the trip to the pub that evening proved to be an exercise in night navigation. The use of a headtorch with a green filter and low-intensity brightness was something of a revelation, with the dim green light helping to retain night vision. The real gem, though, is what the light does to a map. The features become hyper-real and contour lines jump out with a clarity that daylight doesn’t match. 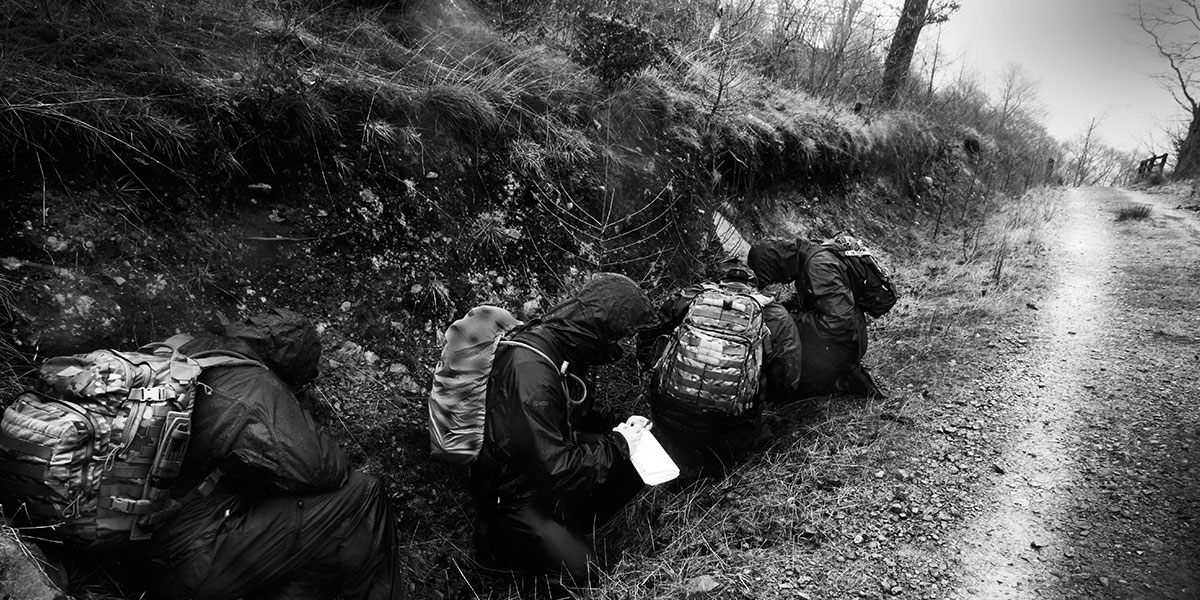 The next morning things take on a gnarly form as we have a guest. Mother Nature. Rain, in all forms: fat, thin, large, small, but above all wet, falls with a predictable Lakeland ferocity. Apparently, these are perfect SF patrolling conditions, apart from it being daylight (they work mostly at night), because bad weather adds to the element of surprise. So today I see the SF do what they do best, going about their task with the utmost professionalism as if the cold and the rain were but a trivial inconvenience.

The shape of the land is about the only thing that won’t change in a time of war. For this reason, navigating by contour lines is a critical skill for these guys to learn. Once you get your eye in, this becomes a fluid, efficient way to navigate. It’s practiced repeatedly until it’s second nature.

Having spent two days working closely with these dedicated few, one image imprinted upon my mind. Crouched in a wet ditch, hoods up, heads down, maps in hand, silent, earnest, determined and, above all, navigating. This moment could have been from 1917 not 2017, and it sums up my view of these guys. Out of the limelight but always in the forefront of the action, they’ll never tell their stories, but I can tell you this...

Navigation underpins everything; they know it and – now – I know it.

Ultimate Navigation is a charity providing navigation courses from hillwalkers to Mountain Rescue and Special Forces candidates, with profit going back into maintaining the hills we all love.

Long-time Trail photographer Tom Bailey has been expertly shooting the UK’s hills and mountains for the magazine for over 20 years. You name it, Tom’s walked it.