Meet Tim. What started as a chat around a camp fire, ended up as one man's epic journey to change his lifestyle and reach his first ever mountain summit.

One night in January 2017, myself, Tim and a few other instructors from Wilderness Pioneers were sitting around a camp fire, sharing stories, past adventures, port and having a general chin wag. I had been sharing some of the more ‘interesting’ adventures that I have had on my numerous trips, when Tim stated that he had never been up a mountain in the UK! 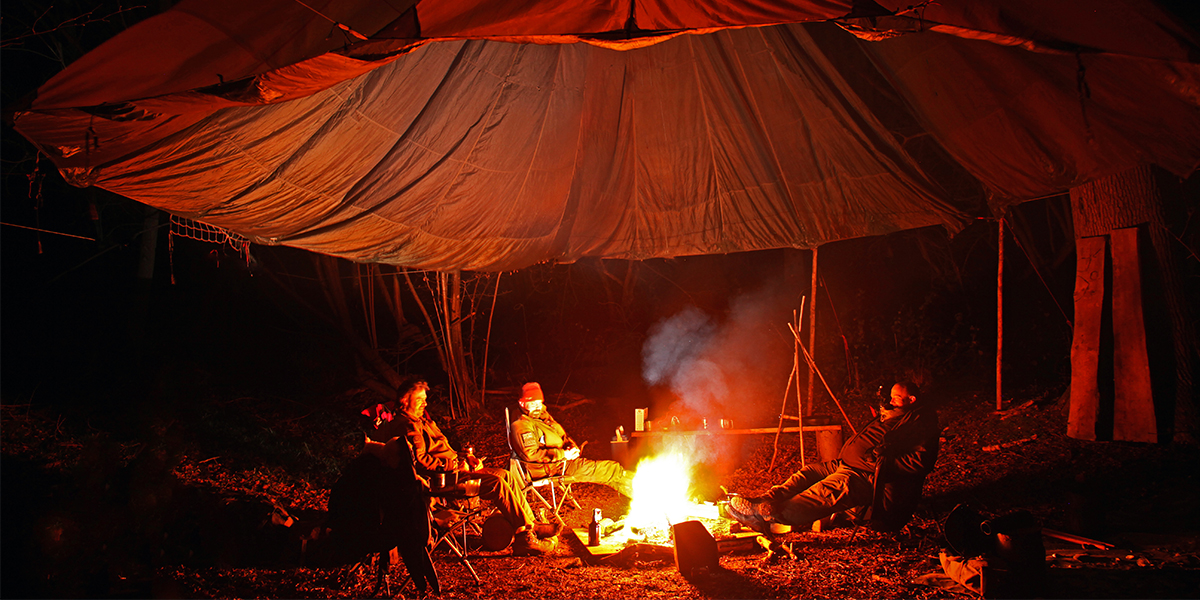 He readily admitted that his weight had always been an issue, but it was something that he would dearly love to do one day. There and then, I offered as a Mountain Leader and friend, to take him up any mountain in the UK when he wanted, and more importantly help in any way I could to get him there… and so the seed was sown.

I first met Tim when he applied for the role of Bushcraft Instructor with Wilderness Pioneers. From the first time I met him, I really liked the guy. He is one of those few genuine people we meet in our life journey. Since that time, we have become good friends and shared many nights in the woods doing, learning and sharing various bushcraft activities.

Tim, from the first time I met him, was a ‘big’ guy in both personality and size.

Tim works as an IT geek! Something to do with online catalogues for large businesses. Most of his day is spent sat on his backside, looking at a screen and drinking coffee! That boy loves his coffee! No instant rubbish for him.

He works long hours, and then goes home to his wife and two young children and starts his other role of loving husband and father. He struggled to find time to exercise, and being tired from work his diet was not the healthiest… and he knew this.

This was all leading to him going down a route that is often seen in people who are not happy in themselves - depression! He was so desperate to lose weight that he has started seriously looking at the surgical route, and getting a Gastric band fitted. 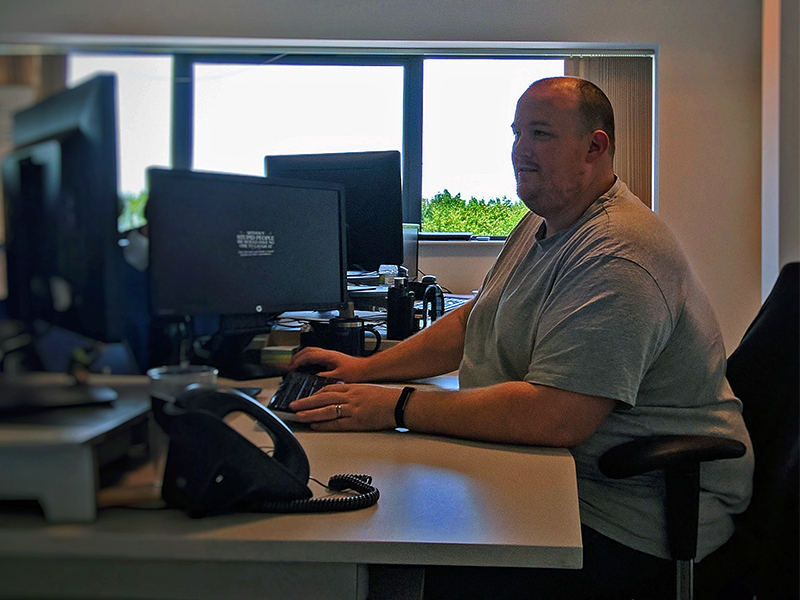 Approximately two months after our night in the woods, Tim and I were back out doing some filming for YouTube, and during a break for tea and coffee (did I say that Tim loves his coffee?) Tim brought up the previous conversation, and how he really wanted to be able to spend more time outdoors and be more physically active and lose weight.

I offered various advice, which included just spending more time outdoors with me, walking a little bit more, and not putting pressure on himself; rather go and enjoy his walks, and setting realistic achievable goals. Tim took it all on-board and decided there and then that he would do it. The ball was now in his court, and I was desperately hoping that he would continue with the game. We left it there, and agreed to meet up the following weekend in the woods for a walk. 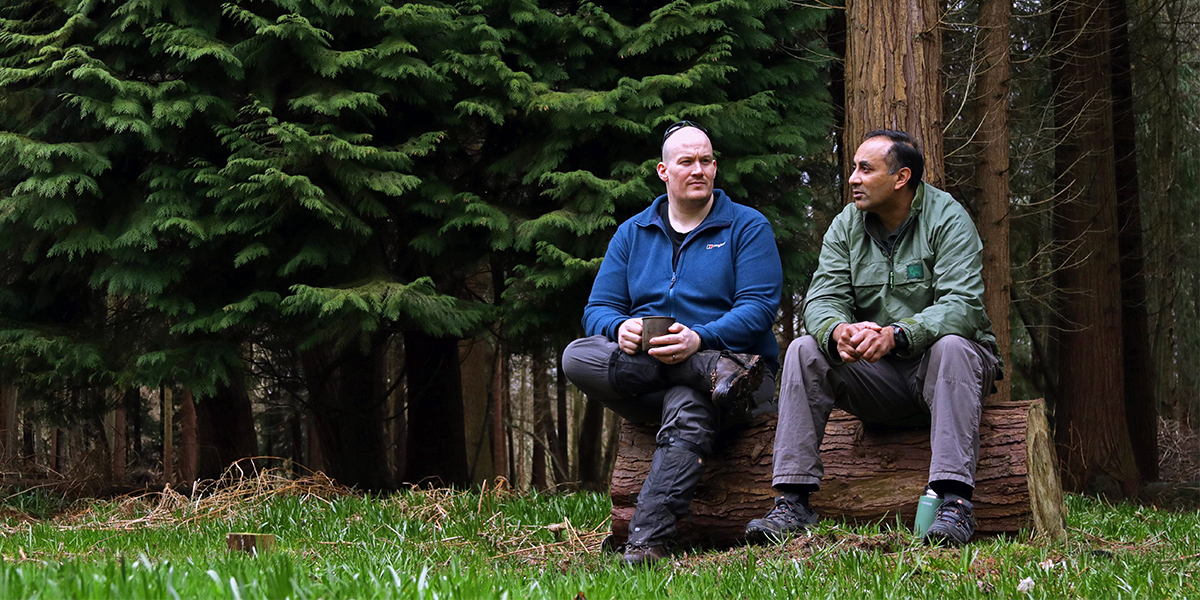 So the following month (April), we’re sat after wandering around the woods, having coffee (surprise, surprise), when Tim turns to me and asks me to take him up his first mountain!

To say I was gobsmacked, is an understatement! Sat on the log, drinking coffee, listening to the birds a date was set. Tim would climb his first mountain the following year, in June 2018.

The next thing for Tim to decide on was what mountain he wanted to climb. I started by offering something ‘gentle’ in the Brecon Beacons. But Tim wanted something appropriate to the journey that he was putting himself on; so I offered Snowdon.

This wasn’t enough for Tim, he wanted “a challenge, something that scared me and got me out of my comfort zone”.

Our conversation was pretty straight forward... 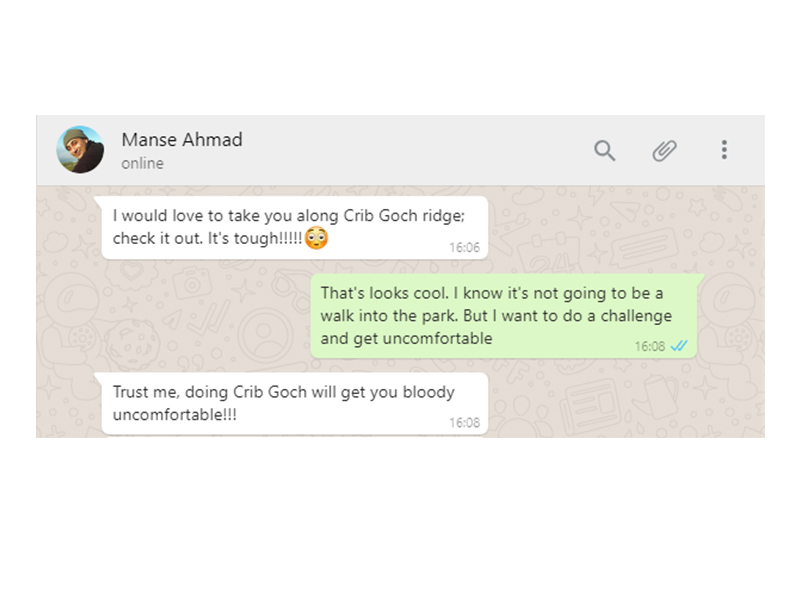 I should say right now, I did explain to him what the Crib was, and only suggested it as it was a challenging route. I did NOT expect him to take up the offer! But Tim, being Tim, agreed!

I had a call from Tim about a week later. He had just been watching some excellent YouTube drone footage of the Crib Goch ridge. I do remember a few choice expletive words aimed at me, and then he decided to mention that he was afraid of heights! But he still wanted to do it!

Tim’s journey to the mountain 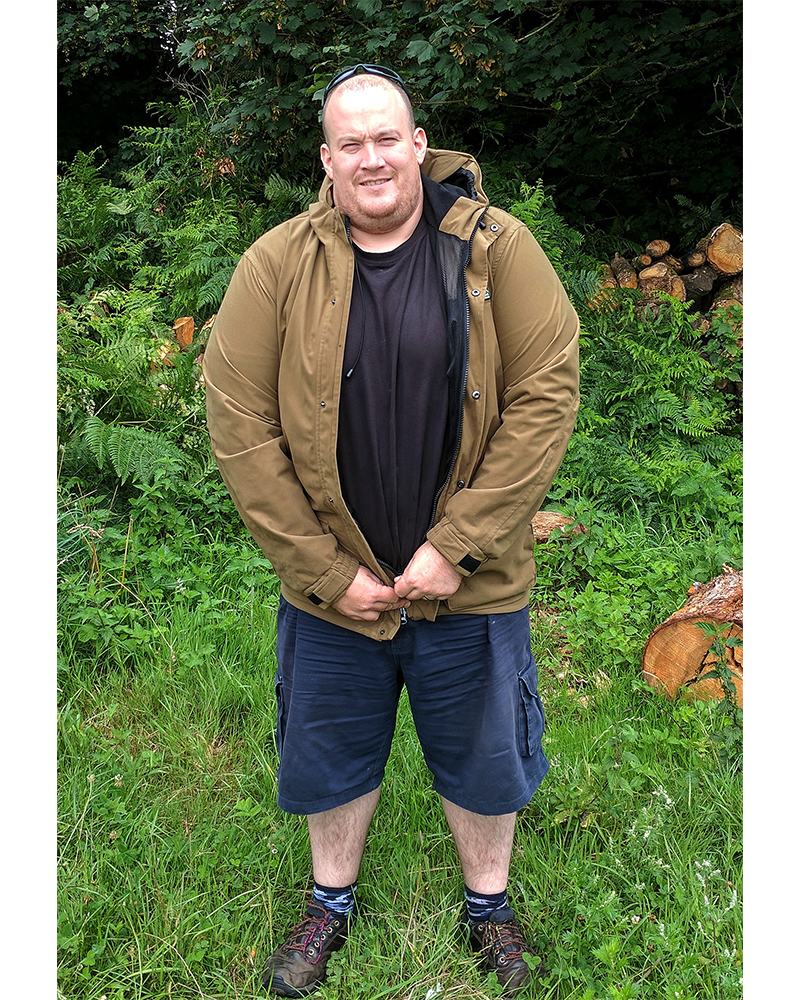 Tim got really serious about the mountainous goal that he had set himself. At the start of his journey, Tim weighed a staggering 28 stone (177.8kg/392lbs). He set himself a challenge to reach a comfortable weight before his climb by setting small achievable goals. Some were as simple as being able to zip up his favourite coat, then being able to wear multiple layers underneath, and so it went on.

Having a young family and a wife who worked shift patterns, Tim had to be imaginative on when he could get in the exercise. He sat down with a calendar and started by blocking out the hours in the week when he could not go to the gym.

Tim started going to the gym regularly, changed his eating patterns, started walking the 3-4 miles to work every day, set himself a 10,000 steps a day challenge, and more. He went so far as to ask for a standing desk at work so that he would be more mobile and active. By making small but regular changes, he started losing weight.

I asked Tim what helped him stay motivated. He answered:

Each time I went to the gym I would push myself for longer or harder each time, visualising the mountain and each step or weight I did in the gym would be one step that would be easier to take on the mountain. In hand I knew each pound I lost would be one less I would need to carry up to the summit.” 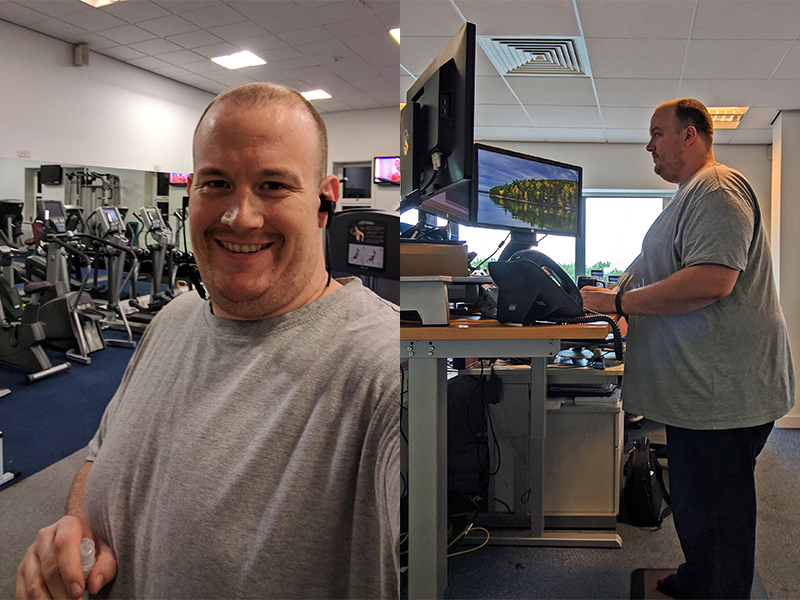 So June 2018 arrived and Tim was ready in himself to climb his mountain. He had worked very hard to drop his weight to 20 stone 12lbs; he had lost a total of 100lbs in weight!

He was ready to fulfil his dream.

We started early on Saturday 2nd June. The conditions were good, light breeze, no rain forecast and a low cloud layer. The low cloud layer really helped Tim and his fear of heights, for most of the ridge. There were the odd occasions though when we got a break in the clouds and you could appreciate the view. Not really sure if Time did though!

Tim was understandably apprehensive of what lay ahead, although he couldn’t see it. A bit of reassurance from me, and reminders that he was setting the pace helped greatly.

The Crib is often described as a beautiful ‘knife-edged’ arête. The name means ‘Red Ridge’ in the Welsh language. The route starts from the Pyg Track, and leads to what is known as a ‘bad step’, where hands and feet are both needed for a short while, before gaining access to the arête. 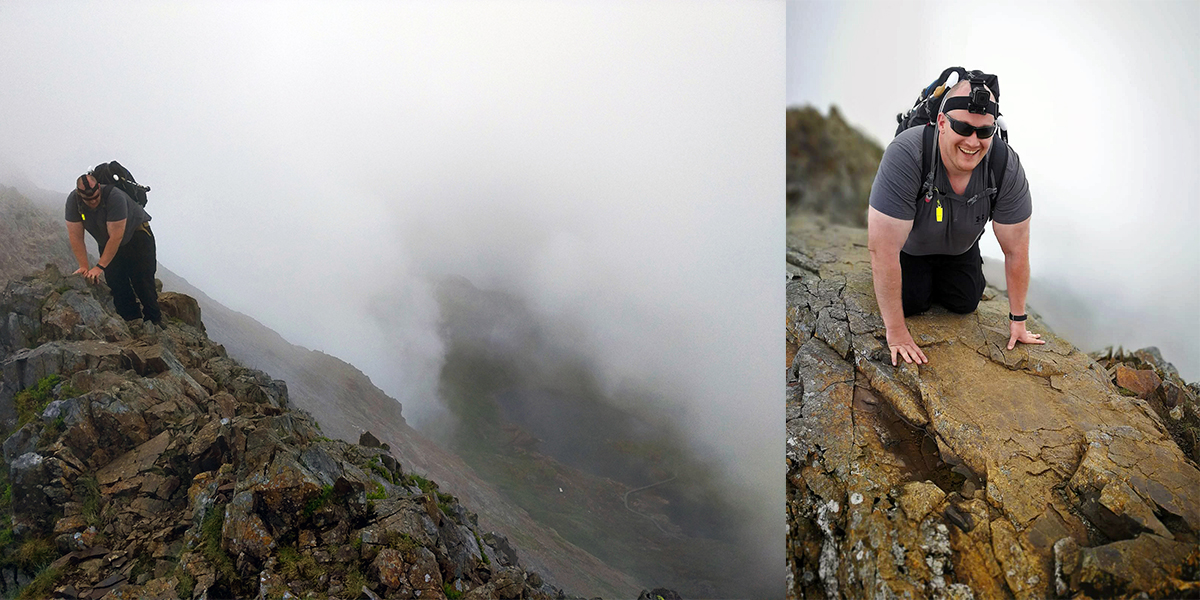 The route is described by the Snowdonia National Park Authority as ‘not a mountain for the inexperienced’, and I would totally agree with this. I am a qualified Mountain Leader with over 20 years of experience, and for this trip I was carrying a full range of ropes and appropriate equipment to make sure that Tim would remain safe, and more importantly, able to fulfil his goal.

The day for Tim, was slow but steady, there were moments of excitement, joy, laughter and elation as well as pure fear, frustration, questioning his own and my sanity on doing this route. I am sure that the full range of the English language was heard at some point during the route! I have video evidence! 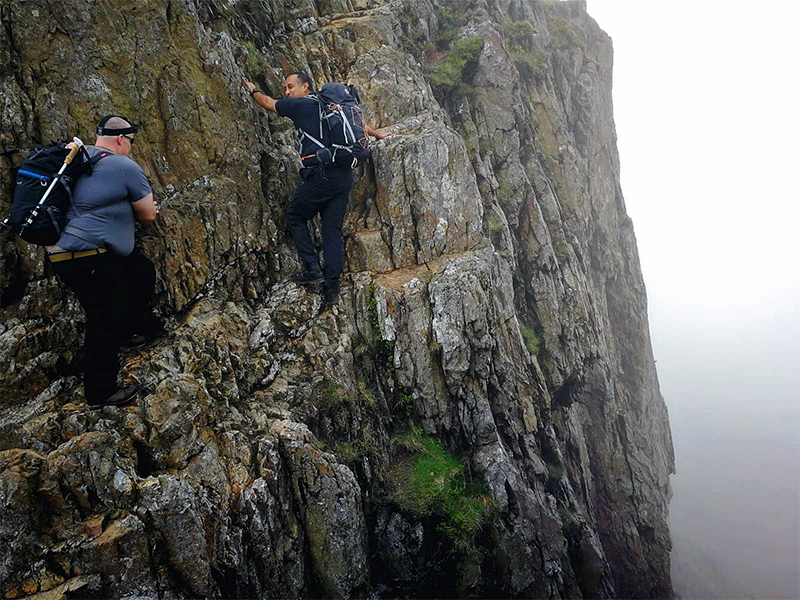 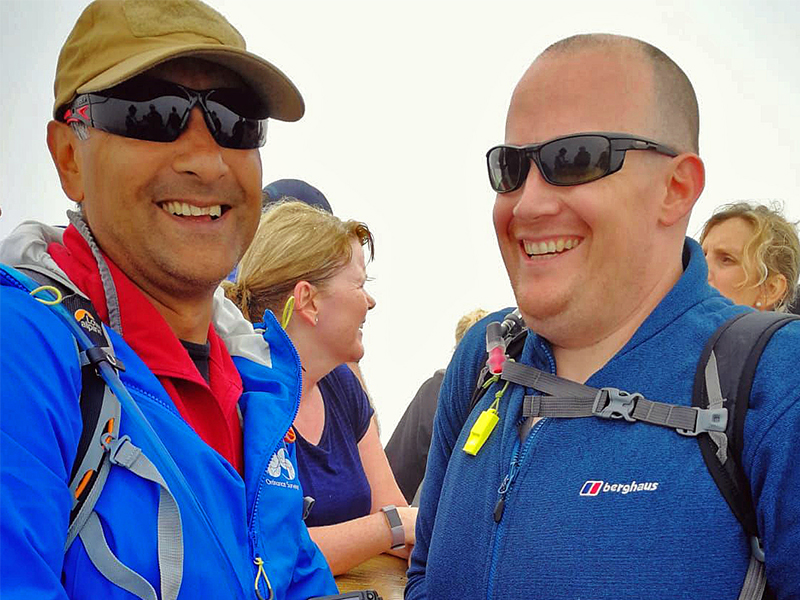 Tim enjoyed the ‘delights’ that all hill and mountain walkers experience of the numerous false summits, and also the solitude and self-reflection that can be found in such beautiful places.

The day was about being able to share a momentous occasion with a friend who had started an amazing journey of self-improvement (both mental and physical) for himself. It was about Tim’s journey from the woods of Oxfordshire to the top of Snowdon. Crib Goch was very much like the year that Tim went through; the highs, the lows, the self-doubt, the commitment and perseverance to achieve a first and set him on a journey that would stay with him for the rest of his life, something that he will share with his son and daughter in the future. 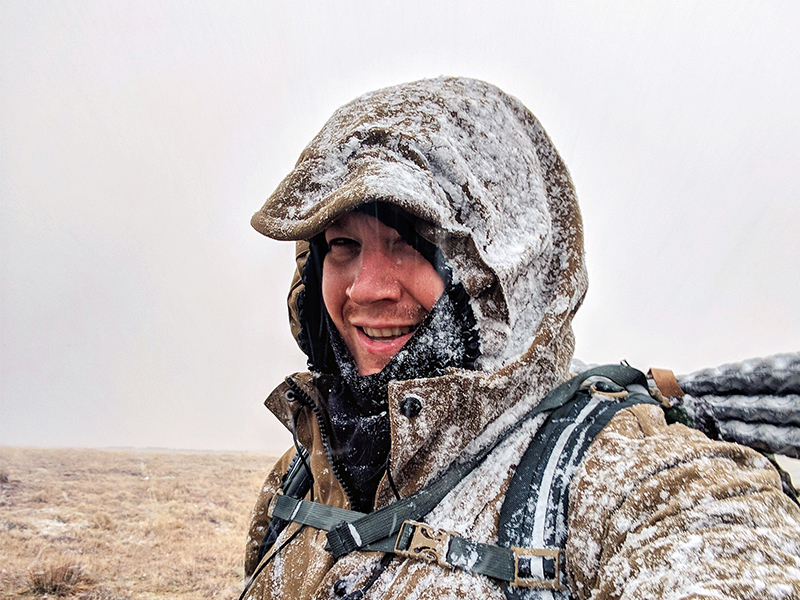 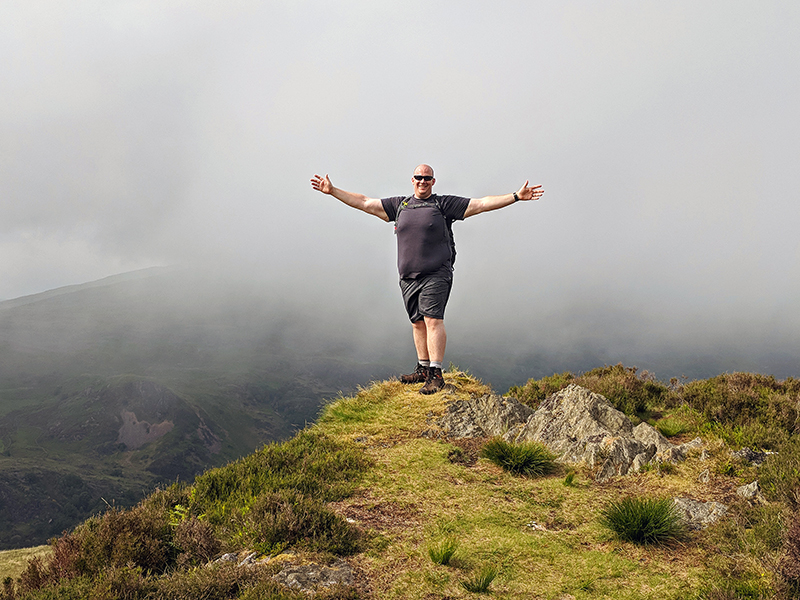 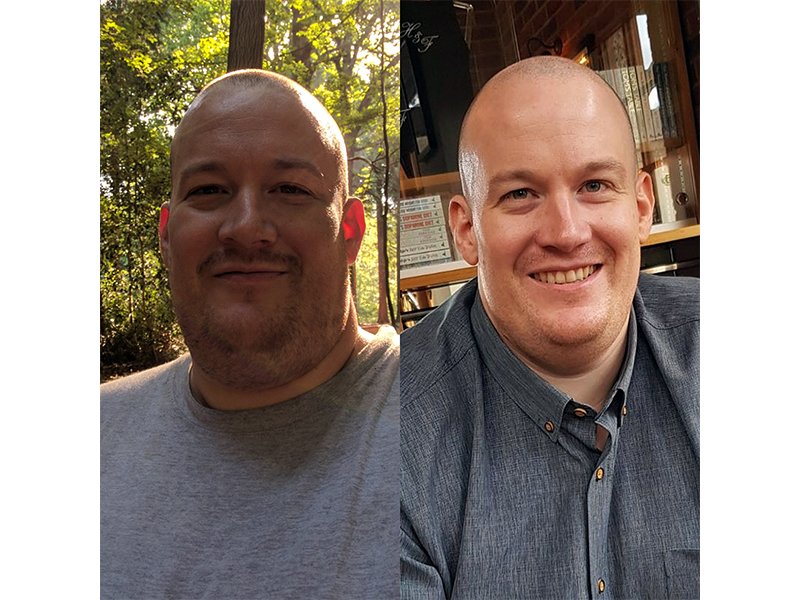 Being fitter and more confident has opened up a whole new world for him, and he continues to take part in activities and adventures which he could only dream of in early 2017. He’s an even nicer guy than he was before!