Most romantic places to visit in Britain

Find romantic places near you

Discover the most romantic places in Britain and recommended walks nearby. From locations with a historic love story, place names with a romantic significance or perfect spots for your next date, explore some of the best places in Britain with OS Maps. These places are great to visit at any time, especially on Valentine's Day!

Discover more great places to visit with a 7-day free trial for OS Maps on us and make marvellous memories with someone you love.

Please check opening times of places which are not open to the public 247.

Turn up the heat as you spend time reading love letters and poems from John Keats to Fanny Brawne in the home where the poet fell in love and wrote some of his finest work including 'Ode to a Nightingale'.

Keats House was to be his last resting place in England and now serves as a memorial to the poet and is home to Fanny’s engagement ring, locks of their hair, paintings and original books in which his poems were penned, as well as letters exchanged between the lovers.

Some of Scotland’s greatest kings and queens were laid to rest in Dunfermline Abbey. It’s also the backdrop to a beautiful love story set in the 11th Century involving King Malcolm III (b.1031, d.1093) and Queen Margaret (b.1046, d.1093). During this time, members of the royal family rarely married for love but for political, social and economic reasons. Malcolm III is said to have fallen in love with Margaret upon meeting her. Sadly, she declined his proposal as her mind was set on being a nun. He then went on to pursue her for two years until she said yes and they were married at Dunfermline Abbey itself. They are two of the many royals laid to rest here too.

Nowadays you can stand in awe of the hugely impressive nave and its Romanesque architecture. The perfect place to wander with a date.

Historically the most romantic place in Scotland, if not the UK, many still head to Gretna Green to get married today.

This small village became famous in 1754 when the Lord Hardwicke's Marriage Act came into force in England and those under the age of 21 had to sought permission for marriage from their parents. As a result, young couples flocked to Gretna Green, as over the border in Scotland you could get married far younger without consent.

Gretna Green's Famous Blacksmiths Shop was the location for many weddings and is still there today. It’s a must see if visiting Gretna Green.

Tintagel Castle has been a constant source of inspiration for artists and romantics alike, it provides the perfect setting to let your imagination run wild. You may still be able to feel the magic in the air at the ruins of this Dark Age settlement as rumour has it that Tintagel is the site of King Arthur’s mysterious and magical conception.

Aside from the myths and legends wrapped up in the long literary history at Tintagel you can also enjoy the breath-taking coastline. Loose yourself in the rugged charm of the Atlantic coast of Cornwall, what could be better than to share this magical castle with a loved one?

The story of star-crossed lovers Romeo and Juliette has captured our hearts and our imagination for centuries. In Stratford-upon-Avon you will be met with 800 years of history including that of the Bard himself, William Shakespeare.

In the garden at Hall’s Croft you will find a mulberry tree that is linked to a specimen found in the garden of Shakespeare. This is the ideal place to feel connected to the playwright of some of the greatest love stories ever told.

Explore the setting of Emily Brontë’s ‘Wuthering Heights’ in Haworth, West Yorkshire. The landscape was an integral part of Brontë’s novels and none more so that ‘Wuthering Heights’. Here you can walk on open moorland and connect with the darker side of love that comes with the tale.

You could even visit the Brontë waterfall which sits in the heart of the moorland and was a constant source on inspiration to the Brontë sisters. Take the recommended walk below to see it in all its beauty.

Top of the list for romantic places in Wales is Pembrokeshire village, Stackpole. Take in the sights of the Bosherton lily ponds as you wander to the peaceful Barafundle Bay. Here you can watch the waves kiss the ambling coastline from up high before heading down to Broadhaven Beach - perfect for a sunset stroll (route recommended below!)

Another firm favourite for catching dreamy sunsets is along St David’s Peninsula. Full of secluded beaches where you’ll feel like the only people in the world and picturesque cottages for a cosy weekend away. In the warmer months its colourful coastlines are full of pastel hued wildflowers. Admire the pretty shades of pinks, purples and golds making it the idyllic spot to sit and watch the world go by.

Lover’s Leap is a name that is often given to rocky outcrops, usually in a range of hills or in a valley. One thing that is for certain is that if you jumped from one in modern-day clothes, you wouldn’t be as lucky as the lady in this particular love story!

It is believed that during the Napoleonic wars a young lady heard that her lover had been killed and through an irrational moment of her heartbreak and loss, she climbed to the top of Lover’s Leap where she attempted to throw herself off. However, her billowing skirts and petticoats acted like a parachute, saving her life and breaking her fall. Realising her almost fate she returned home to see her lover was in fact waiting for her – he had returned home to be with her.

Admire this impressive landscape on the recommended walk below.

The evocative name of Sweetheart Abbey comes from a tale of devotion.

The Abbey of Dulce Cor is often better known from its evocative name, Sweetheart Abbey. Located in Pow Burn it was founded by Lady Dervorguilla of Galloway (the daughter of the Lord of Galloway) in memory of her late husband, John de Balliol, who passed away in 1268. In tribute of her love to him, she chose the name ‘Dulce Cor’ as it means ‘sweetheart’ in Latin. After his passing, Lady Dervorguilla kept her husband’s embalmed heart in an ivory and silver casket which she took with her everywhere for the rest of her life. Even when she passed away in 1289, Dervorguilla was laid to rest in the church’s high altar holding the casket close to her heart.

Over 700 years on the graceful Abbey still stands tall, ornate and remarkably complete with a stone effigy of Lady Dervorguilla’s cradling her husband’s heart in the south transept.

According to legend, Dwynwen fell in love with a boy of whom her father disapproved. After praying to God to help her forget her feelings, an angel appeared and gave her a potion that erased his memory and imprisoned him in a block of ice. Later on, God gave her three wishes and she defrosted him. She also wished that true love would be respected in future and that she herself would never marry. Afterward, Dwynwen devoted her life to the service of God and built a small church on the isle of Llanddwyn. It's still there today.

Join the GetOutside Community and share with us your favourite place to visit with a loved one. Remember to take care of the great outdoors and follow the Countryside Code at all times. 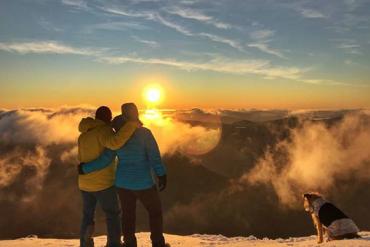 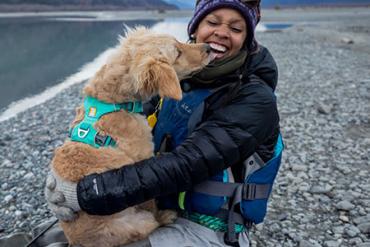 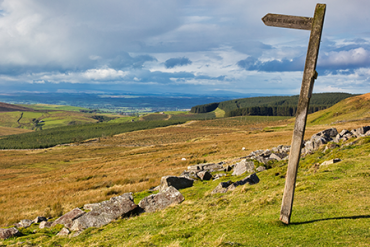