Getting outside with Pokémon Go

Combining the best bits of games and geocaching, Pokémon Go is taking the world outside

Unless you've been living under a rock, you have probably heard of Pokemon Go, the latest release from Nintendo.

We don't normally cover games on #GetOutside, but we are going to make an exception for this one - because it uses augmented reality (AR) to encourage players to get out and explore the real world.

The game uses the real world to generate maps, and shows your location

It's all about finding and catching Pokemon, like this cute little Charmander

What is Pokémon Go?

It builds on the long-running franchise of games, TV and toys about capturing and battling mythical animals - Pokémon. A big part of it is trying to collect all the rarest Pokémon - it's catchphrase is 'Gotta catch them all'.

The latest iteration puts all the Pokémon on to a real world map. To capture them you have to physically get to the location on the map and search the area until they appear and can be captured. You will also need to look for Pokéstops - places where you can find items and Gyms, where you can pit your captured Pokémon against other players in a short battle.

The great thing about this form of augmented reality game is that it rewards walking or cycling as it's often the easiest way to go between Pokémon hiding spots, Gyms and Pokéstops. Many of the stops are clustered around parks and other green spaces, so it's a great way to get kids (or adults!) out and active.

Landmarks and significant buildings are often Gyms, so it can be a great way of discovering more about your area too.

Real word features, such as this sculpture become important points in the game

You can level up and challenge other players in the Gym

The game is free to download and play - there are in-app purchases which are a faster way to get the items needed to capture Pokemon.

There are already loads of guides on getting started - try this one from IGN or the official page here, but here's some safety tips when you are playing:

Tell us what you've found!

Lots of people are getting outside to find Pokémon near their homes, and at the same time they are discovering more of their local area.

For example, the War Memorial at our Southampton Head Office is getting more visitors now that it also features a Pokéstop.

We want to know what weird and wonderful things you've found while trying to catch them all. Tell us in the comments below! 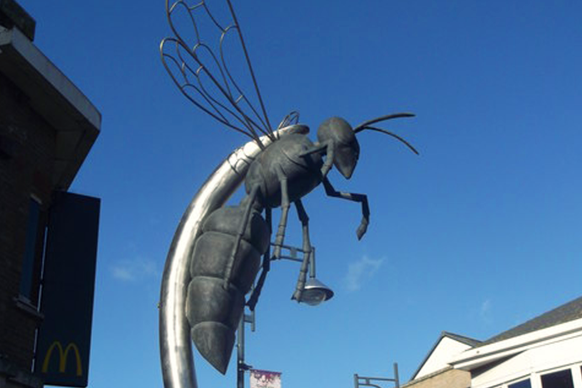 Hornet statue in Watford - and it's not even home to any Beedrills?!

All of Great BritainOther outdoor sports and activitiesOutdoor skills