Katie is an artist and marine conservationist who's followed her love of wild places to a new life on the Isle of Skye.

After spending most of her twenties enjoying the fast pace of London, Katie decided to leave city life behind in 2013 and start anew somewhere closer to the nature. She arrived on Skye with nothing but a few belongings and never looked back.

Katie now wakes up to the sound of waves (or, more often, howling gales!). Inspired by the place that she lives, she creates artworks inspired by the colours Hebridean seas and the shapes of the landscapes around her.

When not in the studio she spends much of her time organising beach cleans or campaigning and volunteering for marine conservation causes. She has taken part in whale rescues as an active Marine Mammal Medic with BDMLR and is a Regional Rep for Surfers Against Sewage.

A love of the water means that Katie finds it hard to resist dipping into a clear loch or plunging waterfall. Luckily she's not bothered by Scottish snow and ice

Katie is no stranger to being outside as she once spent a year living wild in the woods as part of a television project. Although she is now happily back 'on grid' she still enjoys taking time away from modern life to immerse herself in nature and camp out on the Skye hills or shores.

Living outdoors is now second nature to Katie and she's looking forward to a trip later in the year when she'll be spending 40 days and nights on a remote island inhabited only by puffins.

Katie believes that spending time outdoors is immensely beneficial for our mental health and that it is important for us to feel connected to nature in order to help conserve it for the future.

She hopes to show people that you don't need to be an endurance athlete to enjoy getting outside and that simply sitting under a tree with a cup of tea can be equally rewarding.

More from Katie Tunn on GetOutside 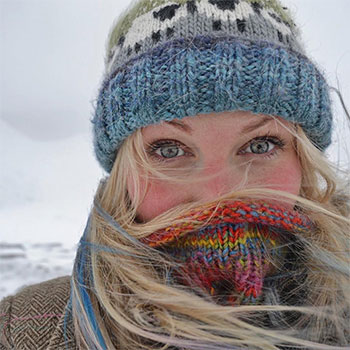 The Isle of Mull – The Long Way Around

While planning to circumnavigate Iceland by bicycle (3000km in 20 days) I found myself in Western Scotland and looking for a long ride which I could use to train my body for the upcoming challenge. A demanding cycle, worth every minute for the beautiful scenery.

Cycling with kids this school holidays: #Reasons To Ride

Cycling can be one of the easiest outdoors activities you can access as a family on a daily basis. A bit of planning and preparation can avoid meltdowns, and allows you to #GetOutside and have safe adventures.