Cycling from Berwick to Newcastle

Follow Steven Rittey's adventure when he cycled from Berwick to Newcastle - on a Brompton!!

There are not many places in England that I have not either visited, spent time in or passed through, however Northumberland is one my least visited counties. I think the combination of being three hours from Manchester, fairly costly on the train and somewhere that I did not know much about has meant that it remained fairly unexplored.

However after watching some of the passionate documentaries by local Northumbrian hero, Robson Green, I decided to pay a visit to the English border city of Berwick-upon-Tweed, the mysterious Holy Island and cycle along the North Sea coastal route to the outskirts of Newcastle-upon-Tyne.

I bought my train tickets at the time of the Northern Rail franchise handover and TransPennineExpress trains were celebrating with a 50% off Advance purchase tickets sale. This made the return to Newcastle only £20. I then bought a connecting train ticket to Berwick, but I could not get my road bike onto the train as all of the bike spaces were reserved. At first, I wasn't thrilled about having to ride over 80 miles on a Brompton folding bike, however this last minute change made the day even more memorable.

One of the unique things about Berwick-upon-Tweed is that the town is located in England, yet there is a distinctly Scottish feel to to the buildings, accent and even the local football team plays in the Scottish league rather than the English. I was immediately impressed by the bridges that cross the River Tweed and stopped for the quick photo before finding my way to the 'Coast and Castles South' cycle route that originates exactly 100 miles north in Edinburgh.

Thwarted by a herd of cows on the way to Holy Island...

This is one of the main 'cycle touring' routes in the UK, but follows a coastal bridleway south of Berwick that wasn't suitable for small Brompton wheels. There was also a herd of large cows blocking the path, so I took this as a sign and found an alternative route even if this meant taking a 20 mile detour inland.

My main motivation of the day was to visit Holy Island. This is a small island approximately three miles off of the coast and connected by a fixed causeway. On Holy Island itself, ancient Lindisfarne Castle is an iconic building in the North East and the main reason why people visit the small outcrop.

What is also unique about getting to Holy Island is that the causeway lies underwater at high tide and every year several visitors mistime their car crossing and become submerged in the North Sea. I did not suffer the same fate on my bike, however after arriving onto the island at 1200 and the tide making an approach at 1225, it was a race to leave! 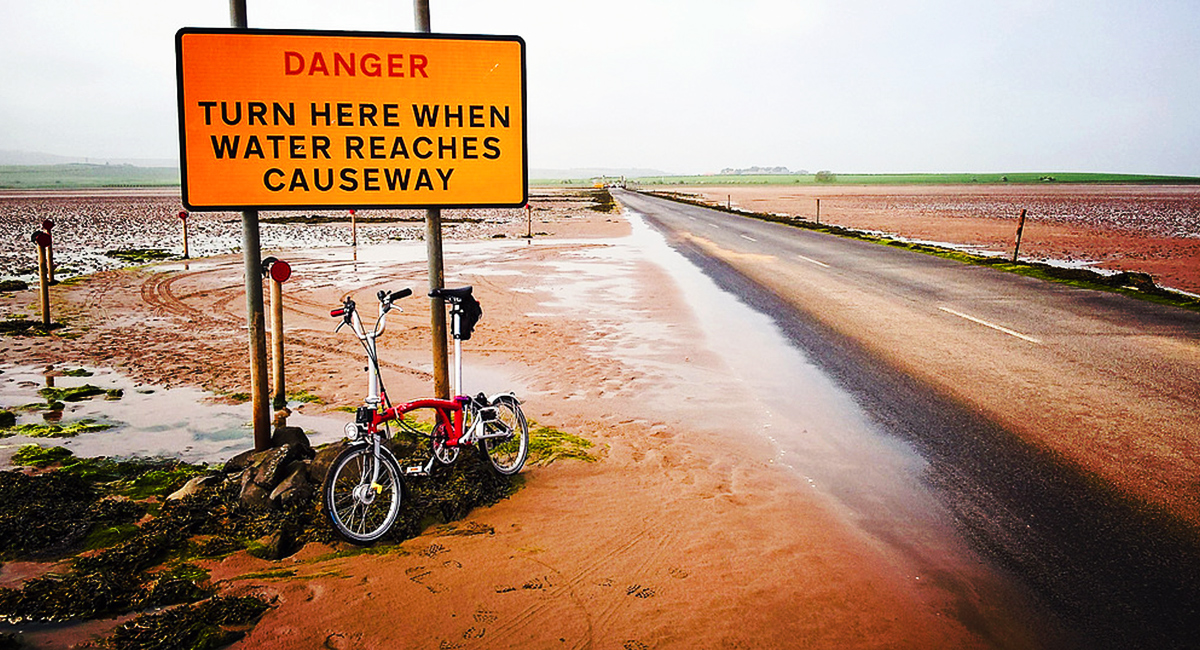 You guys are the reason why I am on the Brompton...

As I reached the mainland again, I rejoined the NCN 1 route and headed towards Bamburgh. This was the former county seat of Northumberland and is home to a huge hilltop castle. It is a truly impressive sight from all angles and conjurers up all kinds of medieval images. I also caught up with some cyclists who I had been passing at various points and realised that I first saw them get off my train at Berwick

It dawned on me that they were the reason why I was on the Brompton rather than my road bike because they snapped up all of the reservations! We chatted briefly and rode together until the busy seaside town of Seahouses which is also the embarkation point for the Farne Islands bird sanctuary a few miles offshore.

I stopped briefly for lunch (cheese and ham sandwich and an apple) and headed along the coastal route once more. The roads were very quiet and the sun finally came out which made for very pleasant riding. The road surfaces had improved and I zipped along on the excellent Brompton bike.

My main aim was to reach Newcastle, however due to the detours, visiting Holy Island and trying to avoid the A1, I was about an hour behind schedule and had to decide whether to finish the ride in pretty Alnmouth or continue to Morpeth. There are not many train stations in the area and one of them; Chathill is one of the least used in the country with only two daily services! 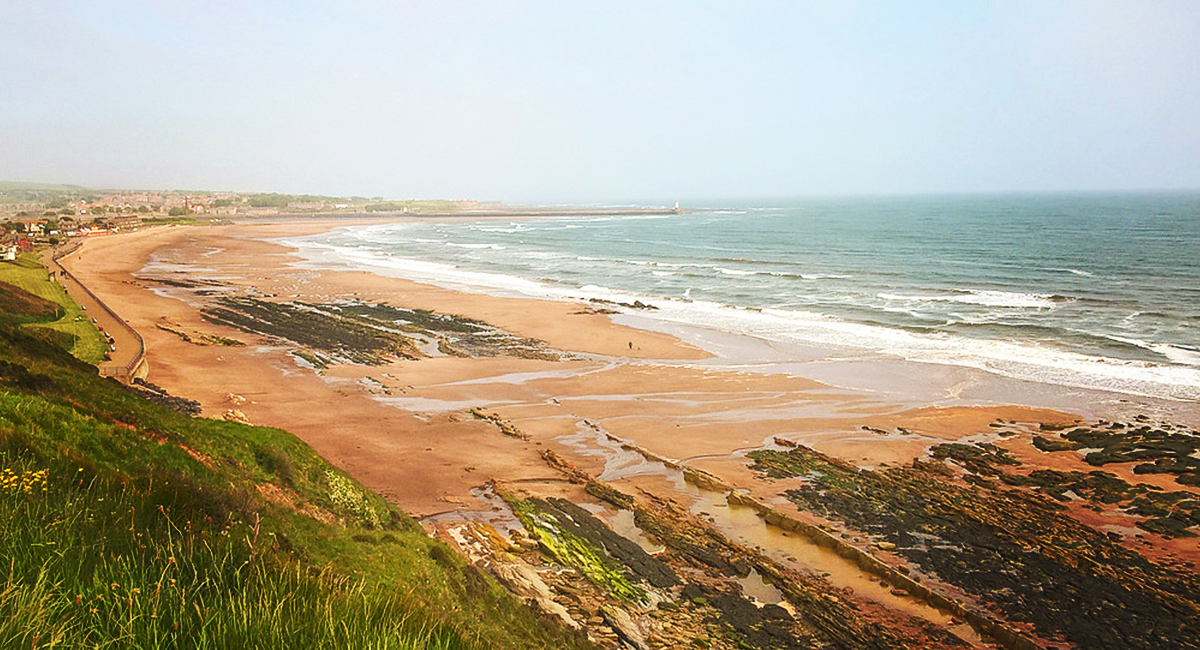 Racing the train to Morpeth...I won!

As the weather was good and I did not feel like stopping just yet, I decided to hammer out the 20 miles to Morpeth with an attempt to beat the train into Morpeth that would have arrived into my current location of Alnmouth at 1719. I love the feeling of time pressures such as this when out on my bike, however missing the train would have caused a potential problem in Newcastle as my advance ticket back was at 1910 and I wanted to explore the city in more detail.

I raced through the harbour town of Amble and reached Morpeth with about 5 minutes to spare before the train arrived. I was a tad sad that I did not ride all the way to Newcastle as I am a 'Completer Finisher' by nature, however Morpeth is just on the outskirts and I would not have to put up with the traffic heading into Newcastle city centre on a busy Saturday night

Newcastle on a sunny Saturday night is unlike any other city in the country. The whole of the city centre and the Quayside has been transformed into a thriving night time area with large groups of hen and stag parties all hopping from bar to bar.

Unlike thousands of other people, I wasn't interested in Newcastle's party scene and cycled around the redeveloped waterfront that is home to the iconic 'winking' Millennium Bridge, the Baltic Art Gallery and the shining Sage Concert Hall. I did not have long to explore the city, but made sure that I cycled over the Tyne Bridge before heading back to the train station.

As I left the city by train and over one of the many bridges that cross the Tyne, the sun started to go low down in the sky and kept me company all the way back to Manchester.

To some, going all the way up to Berwick-upon-Tweed from Manchester, riding over 80 miles and then heading home that night may seem like a long day out or even excessive. I am a firm believer that if you can motivate yourself to get up early on a Saturday morning, you really can get anywhere in the U.K and make the most of your weekend. You just need to set your alarm a few hours earlier! 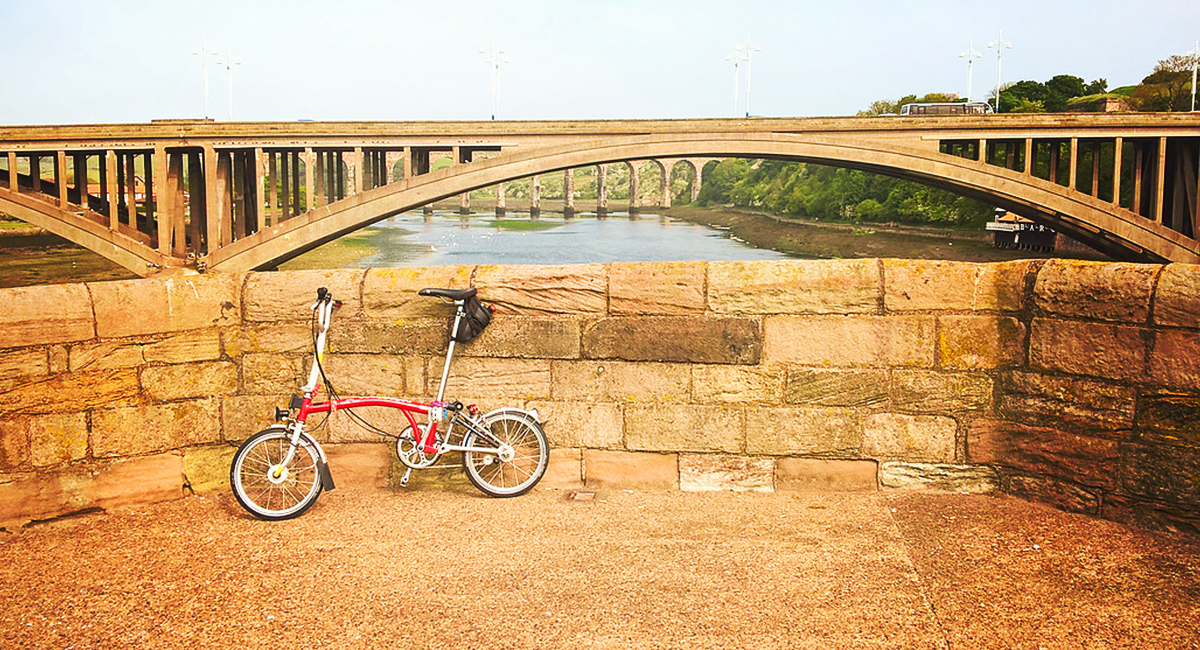