Celebrate the 950th celebrations of 1066 with English Heritage

Find one of the 1,066 arrows hidden at English Heritage sites to claim prizes ranging from a private tour of Stonehenge to hundreds of cream teas.

English Heritage has hidden 1,066 wooden arrows at their sites across England to mark the 950th anniversary of the Battle of Hastings.

The arrow hunt begins today (9 June) at 10am, and will continue until all the arrows have been found. Each arrow has a unique code, so each lucky visitor who finds one will win one of 1,066 prizes. Grand prizes include a castle sleepover, a private tour of Stonehenge, and tickets to English Heritage’s re-enactment of the Battle of Hastings in October. There are also hundreds of smaller prizes to claim, including free entry to sites and cream teas.

To launch the arrow hunt, English Heritage have unveiled a giant arrow at the Battle of Hastings battlefield in East Sussex. While that arrow is impossible to miss, the 1,066 hidden arrows – with red feathers and a red tip – are a bit more difficult to spot.

Kate Mavor, English Heritage’s Chief Executive said: “1066 is the most famous date in English history and the Battle of Hastings was arguably the most important battle in our history, the results of which had consequences for every corner of England.

“We’ve launched the hunt with a giant arrow on the very site where William beat Harold – a dramatic way to represent this turning point in history.” This forms the latest part of the 1066: Year of the Normans anniversary campaign, with an online resources hub and events across the country, including the annual re-enactment of the battle on 15-16 October. 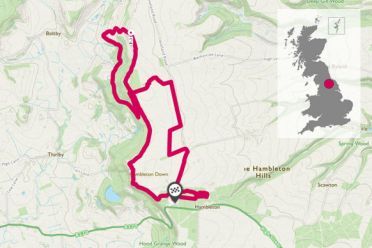