A beginner's guide to caving

A look into the underground sport of caving or 'spelunking' and how to get started.

Q: What is 'spelunking'?

Answer: Exploring wild cave systems - or simply another name for caving or potholing. Far from being something altogether different, spelunking is the largely-American term for caving, which actually has strong etymological roots - having come from 'speleology', which is the scientific study of caves or their environments. 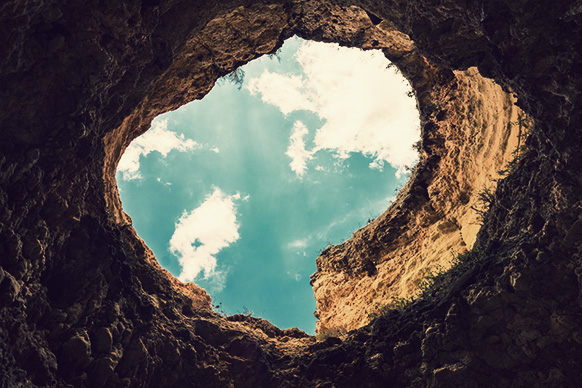 Whatever you choose to call it: caving, potholing or spelunking, there's a world of subterranean labyrinths to explore, but where to start? For the uninitiated, here's a potted history of potholing.

Despite starting to reach mainstream popularity in the 1940s and 50s, caving goes back much further - even so far as the 17th Century. In the late 1880s, French researcher Edouard-Alfred Martel was laying the foundations of cave exploration. A licensed lawyer, Martel dedicated much of his free time to travels across France for the purpose of mapping and studying its extensive cave networks.

By 1888 Martel had explored the Bramabiau gorge to follow a river that disappears underground before re-emerging, as the crow flies, some 500 metres along. This was no small undertaking for Martel and his team, with 'Bramabiau' being a local dialect word for 'boeuf-qui-mugit' or 'roaring ox' - named after the thunderous noise made by the waters when they entered the cave at full tilt. In fact, it took two attempts, with the team initially turning around before waterfall number six to attack it from the opposite direction soon afterwards.

With the Bramabiau having been successfully navigated, Martel went on to explore many more French caves, set up the 'Societe de Speleologie' and earn a name for himself as 'the father of modern speleology'.

Modern techniques and approaches brought much wider appeal, as participants could now put their trust in nylon ropes and scaling poles, rather than the traditional fibre ropes and metal ladders available to Martel. This new popularity also heralded the creation of the National Speleological Society in America, tasked with the advancement of exploration, conservation, study and understanding of US caves.

Within a decade, new techniques were being developed, such as the single rope technique (SRT), which opened up a whole new world of opportunity by opening up ascents that would previously have been deemed too difficult.

Today, this spirit of invention and advancement still pervades, with much time and effort being spent across the world to not only enable cavers to reach new depths, but do so safely and securely.

One of the simplest and easiest ways to try caving is to get out on an organised event alongside trained and qualified professionals. These one-off events might also be popular with tourists and stag or hen parties, but are also a great way to try caving out with no strings attached - metaphorically, that is, of course! It doesn't just need to be a case of turn up and give it a go, though, as there are plenty of dedicated activity providers that handle training, transport and other practical tips to help ensure it's an enjoyable activity for all involved.

In addition, indoor climbing walls should give a clear indication about a person's suitability for caving. Whilst this will be more physically intense than a beginner's caving trip, it should sufficiently highlight participants' overall strength and fitness levels, as well as their tolerance of heights and harnesses.

With these entry-level introductions to caving, novices can see just whether they enjoyed it as much as they had expected to, at which point a number of alternatives for more regular caving can be considered.

Clubs are the best way for new cavers to get the training and expertise needed to start taking the sport a little more seriously. Not only will experienced heads be available to show novices the ropes (quite literally), many clubs organise specific trips to get everyone up to speed. It's worth finding all this out before joining a club, though, as nothing can suck the enjoyment out of an activity quicker than being forced along at an uncomfortable pace. So, speak to the club seniors before signing up to ascertain just how many beginners are already signed up and the kinds of trips that are organised with this group in mind.

One aspect of caving which novices should be aware is conservation. It may seem strange that cave networks that date back hundreds of thousands of years - with white water rushing through - could be damaged by something as seemingly inconsequential as breath, but that is exactly the case. The carbon dioxide in breath can - by increasing the calcium content in water - cause dissolution of cave features. Not only that, by raising the temperature (sometimes by just a few degrees) cavers can inadvertently damage the habitats of fragile cave-dwellers.

As more people take up caving, this will only increase. A problem, of course, is that cavers cannot simply 'turn off' their breathing when underground, or carry cumbersome filtration around with them. Until a fully workable solution can be found for this issue, cavers are advised to take care to not damage the features around them and ensure that all waste is carried away - not left to the water as this can impair streams or rivers further along.

If you want to read up a little more on caving there are plenty of resources available, both in print and online. 'Descent' magazine, for example, is a two-monthly periodical covering all things caving. There are also a number of 'education centres' around the UK that act as academies offering officially recognised training and assessment courses. Finding out the credibility of these centres should be straightforward, as there are a number of official bodies and advisory committees of which to become members. These include the ACI (Association of Caving Instructors), AAIAC (Adventure Activities Industry Advisory Committee) and AHOEC (Association of Heads of Outdoor Education Centres).