What I learned from my 50 Outdoor Sleeps challenge

By Fi Darby (The Two Blondes)

For her 50th birthday year, Fi Darby of TwoBlondes, challenged herself to sleep outside 50 times in a year. She braved all weathers, various shelters and two hemispheres. Plus learnt a few new life lessons along the way. 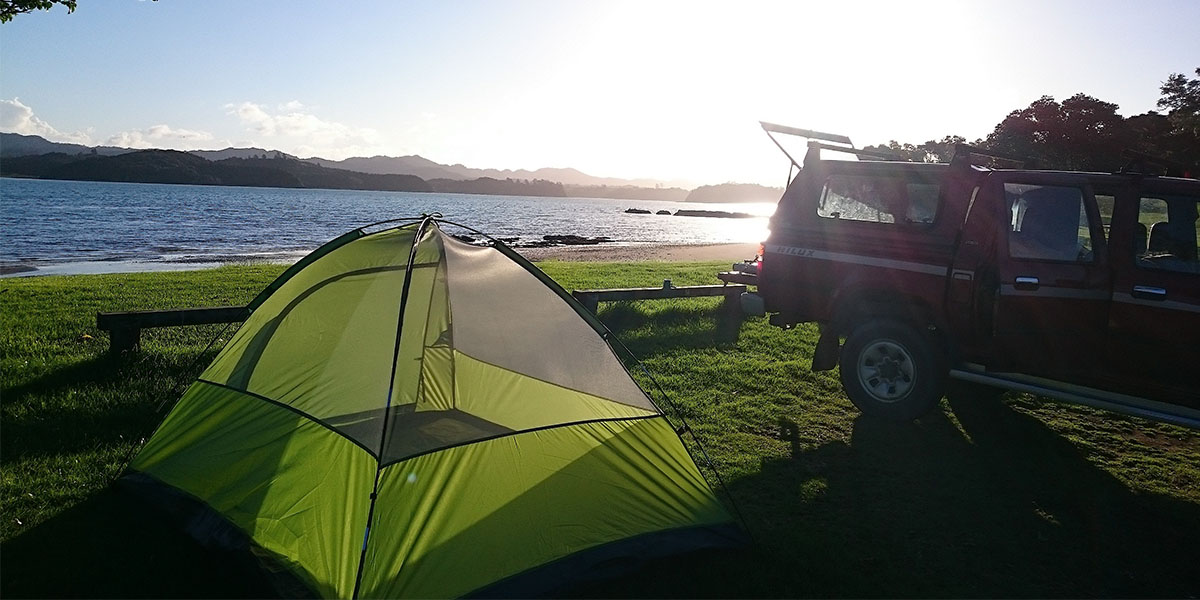 My name is Fi Darby, my outdoor alter ego is Blonde Two of Two Blondes Walking and I love getting outside all year to walk, navigate, swim and sleep!

Before my 50th birthday in January 2018, my outdoor challenges numbered 1, the River Dart 10K swim. This swim made me very proud but was over in around 3 hours. For my 50th birthday challenge I wanted to find something that would last all year, be enjoyable and not cause my sometimes-reluctant body any damage. 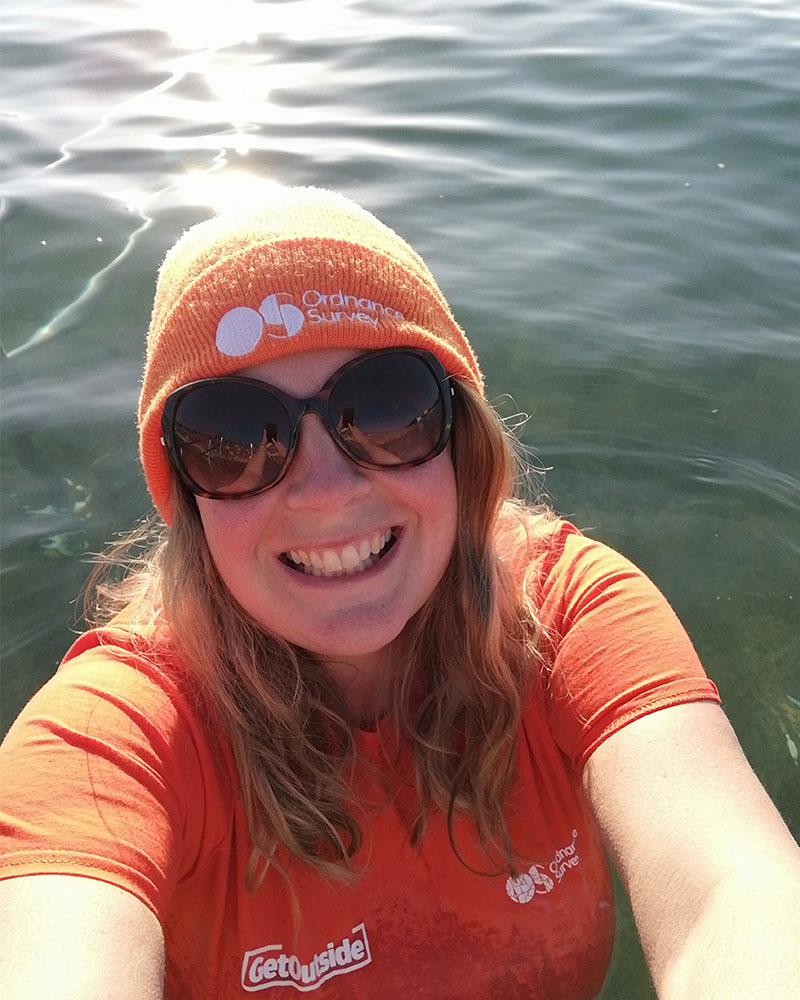 I thought about what I liked to do outside, camping, especially wild camping came top of the list, and so my 50 Sleeps challenge was born; 50 nights sleeping outside (or very nearly outside) right across 2018.

It is, I suppose, a spoiler telling you as soon as paragraph two that I achieved my goal, finishing in grand style, in a soggy hammock on a very misty Dartmoor in December; but there you are.

50 nights sleeping outside right across 2018

This part of the story isn’t about each individual sleep (all documented on the Two Blondes Walking blog); it is more about what I learned from my sleeping experiences.

I proved that middle-aged women (I am guessing that 50 is about half way) could camp in all weathers, in all types of shelter and in two hemispheres, and along the way I learned some important lessons.

If there is one solid lesson I have learned from my 50 nights outside, it is that where or how you camp is nowhere near as important as with whom you do it.

I am blessed to have a set of very close, equally outdoor-minded lady friends. We have coined the phrase, ‘Friends who say, ‘Yes’!’ and generally answer in the affirmative to such unusual questions as, ‘Anyone fancy an outdoor February swim?’, ‘Shall we do some night navigation in the mist?’ and ‘It’s snowing, who wants to do a barefoot dance?’

These friends, along with my husband, who’s outdoor sleeping generally comes in the form of bike packing, and my grown up children, of whose outdoor skills I am very proud, have kept me going with their company and good humour right through the coldest winter nights and the most midge-ridden of summer evenings.

Find some other people who share your particular madness. Facebook groups are a great way to start, look out for the Adventure Queens (ladies) or Explorers Connect (adults) or consider volunteering as a Scout, Guide or Duke of Edinburgh’s Award leader. 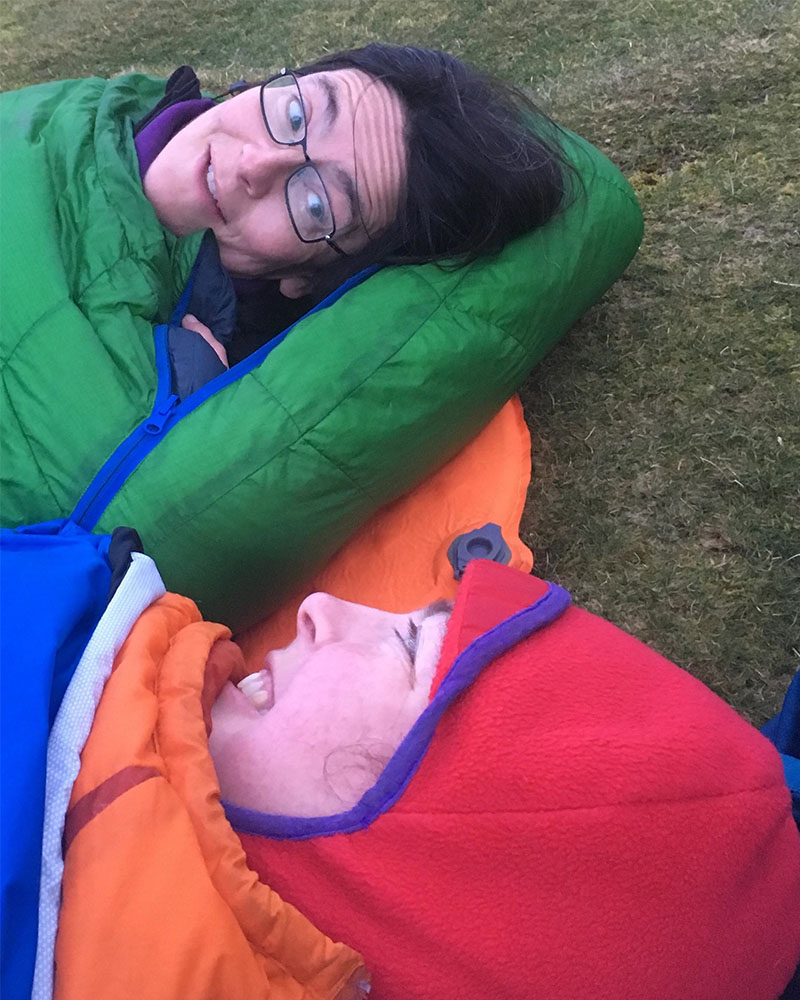 Lesson 2 – There are creatures out there

I have always done more wild camping in the winter than in the summer, this has mostly been to do with training young people, but flying, biting things have also been a consideration. Ironically, although hubbie and I bought our mosquito net on our 2018 New Zealand camping trip, I didn’t feel the need to use it until a midge-filled July night in some Exmoor woods.

This just goes to show that creepy crawlies are not always where you imagine them to be. I am fastidious, for example about checking my walking boots before putting them on, and taking ant-avoidance measures with food but I had never expected to find a slug up my nose, which is exactly what happened during an August Dartmoor bivvy with my nephew.

It was Ben’s first wild camp and he had chosen bivvy bags over tents; clearly a good choice because he slept, rolled up against me, all night. I, on the other hand, did not sleep well, mainly due to a strange noise, which I presumed was Ben grinding his teeth. It just goes to show that you really should talk to sisters before you steal their children because, as it turned out, Ben doesn’t grind his teeth and what I was listening to was the sound of slugs munching their way around and apparently over me, and yes, one even munched his slimy way right up my nose! 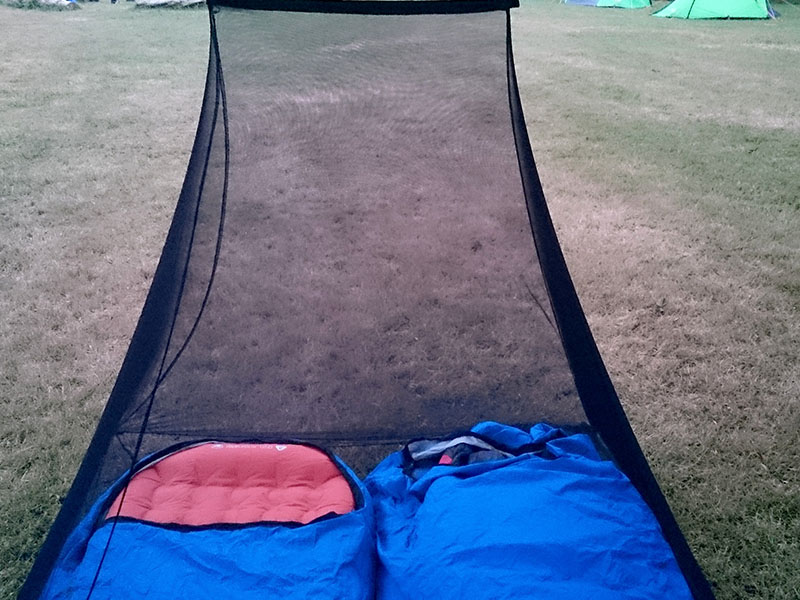 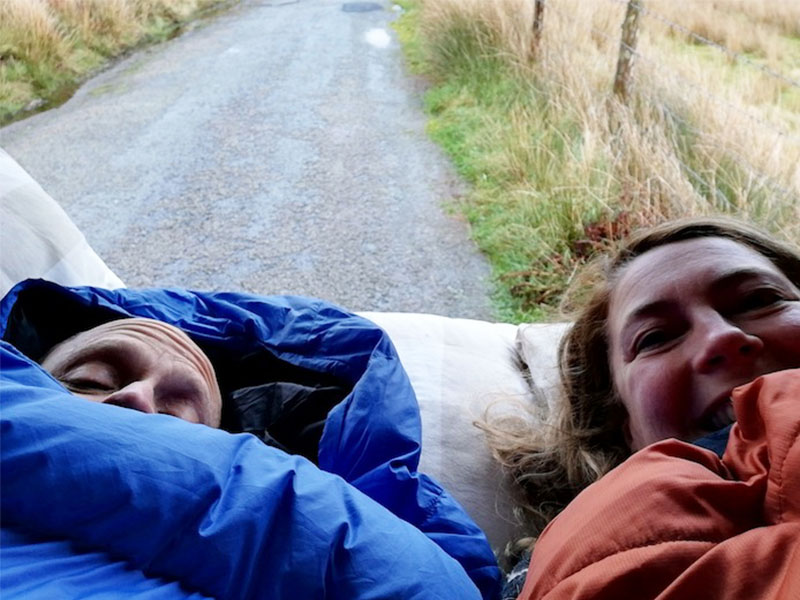 Develop a different set of ‘what is acceptable’ rules for the outdoors. When you are out in the wilds, your hands may not be as clean, your bed not as soft and your supper not as warm as they are at home, but you will be having an adventure and even slugs can make a good story.

Learning is apparently good for our brains but, for me, its more important function is to keep me interested. I have no idea how many nights in total I have spent in a tent but, what with Guiding, Scout leading, DofE Expeditions, family camps and Ten Tors Challenge training, the lifetime count will be high, which is partly why I was keen, over my year of 50 Sleeps to try out a few different types of camping. 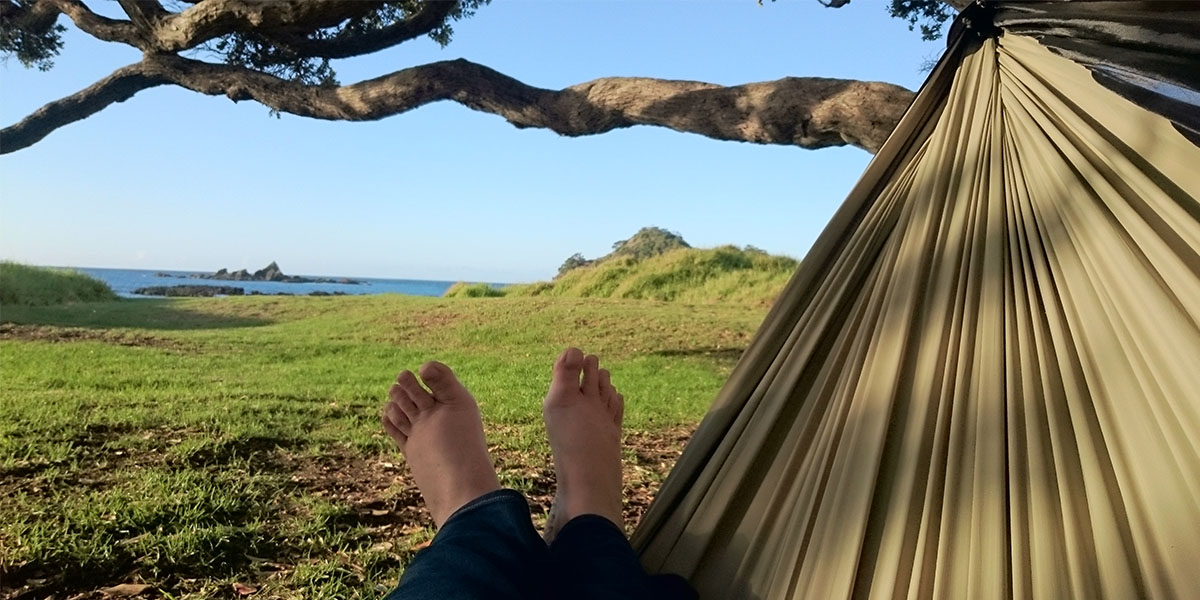 I particularly enjoyed my bivvy bag, including one back garden sleep in the snow but it was my 50th birthday present from my husband that gave me the most learning points, he gave me a camping hammock.

Successful hammocking, as it turns out, requires a fair amount of learning, for me this included finding trees the right distance apart, avoiding ‘banana’ sleeping by lying diagonally in the hammock, rigging a tarp as shelter from the rain (tricky with sideways rain) and tying knots that I could not only trust to keep me up all night but would be possible to undo with cold hands in the morning. I must have done something right because, as well as copious day ‘hangs’, I have had 5 successful camping hammock nights and I haven’t fallen out… yet!

Don’t be afraid to seek new experiences. If a camp doesn’t work out too well, all you will lose is one night’s sleep. There is plenty of information and advice out there, both in the form of courses and on the internet but look for a source you trust, people who regularly do the activity they are giving advice about and those who aren’t afraid to tell you when they get things wrong. 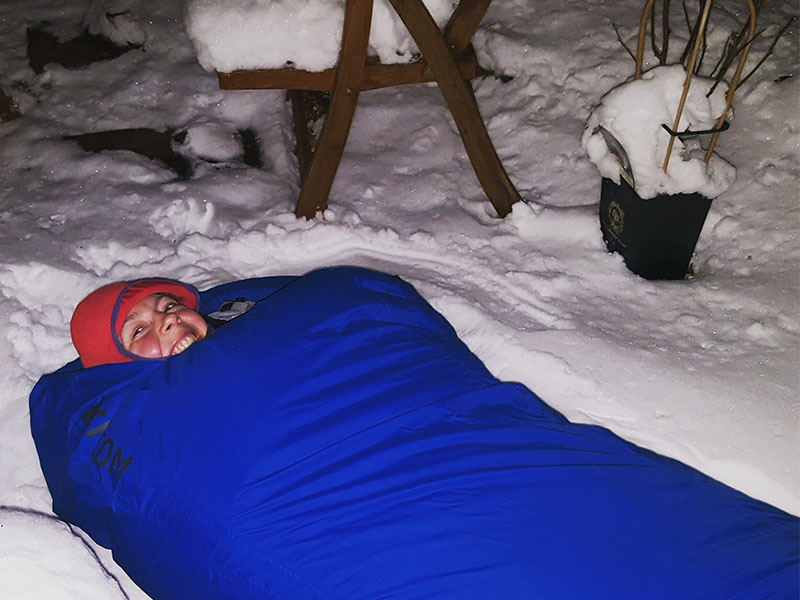 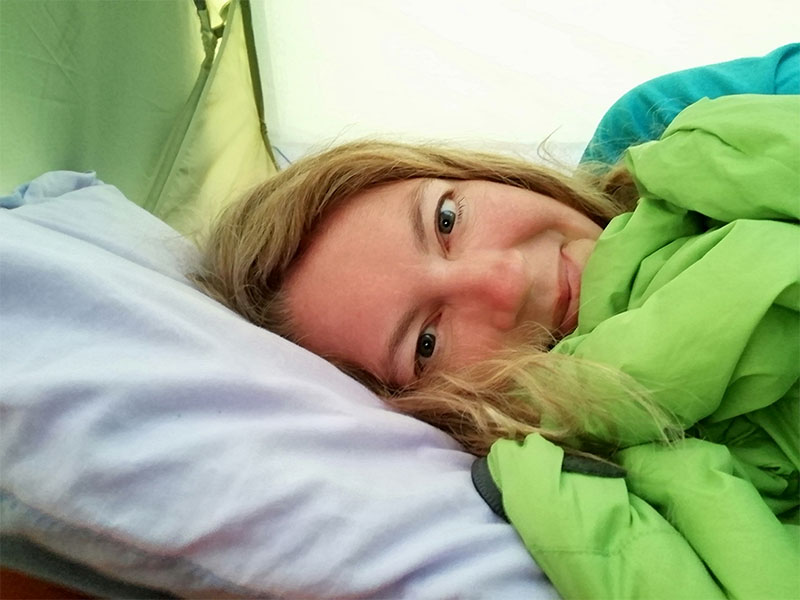 So there we have it. My advice regarding outdoor challenges would be to set a challenge that you know you can achieve but will require some effort and adventures into new experiences.

My name is Fi Darby, I am middle aged and I love camping in all its forms. Who knows where I will end up sleeping in 2019!

By Fi Darby (The Two Blondes)

Fi Darby is a freelance copywriter and blogger and the co-author of the successful outdoor blog Two Blondes Walking. Fi now runs her own blogging and copywriting business Fi Darby Freelance and works with some great clients from all over the world (including Australia and Argentina).

Find out more about TwoBlondes.