Ask most adults what they remember from their geography lessons at school and many will reminisce about natural features such as waterfalls, oxbow lakes, meanders, spits, sea stacks and interlocking spurs. We’re fortunate to have so many of these ‘textbook’ geographical landforms on our doorstep in the UK - here's 10 of the best walks to find them.

Use OS Maps to find a new amazing landscape near you. Find a walk to take you there, or plot your own. Enjoy a 7-day free trial on us. 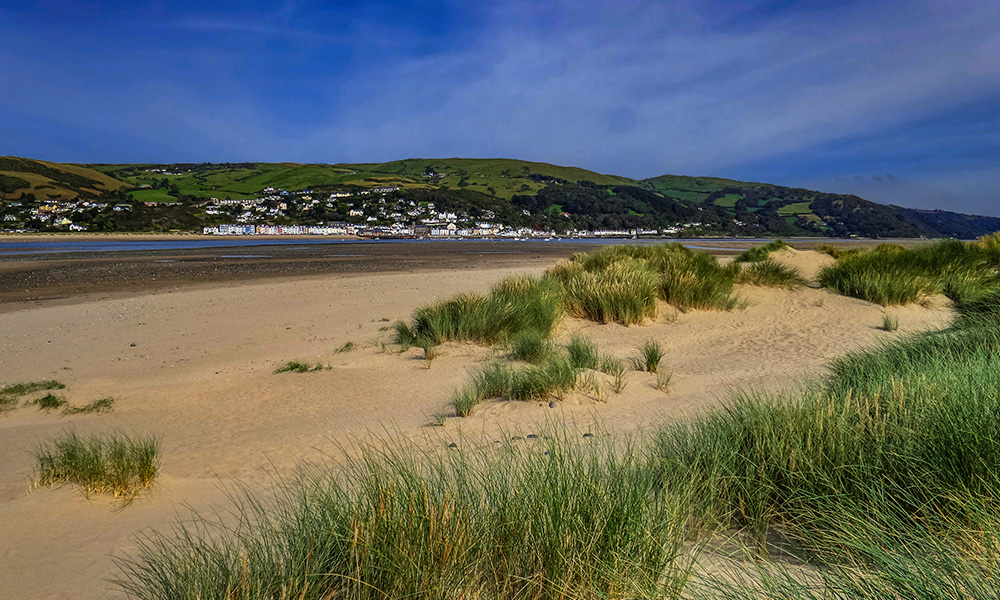 Ynyslas spit, an example of a sand spit

Mid Wales is blessed with beautiful beaches and several stunning estuaries. Across the mouth of the River Dovey (Afon Dyfi) a perfect sand spit stretches north from the sand dunes of Ynyslas towards the picturesque seaside village of Aberdovey (Aberdyfi).

Spend some time crabbing off the pier, shopping for sticks of rock and taking to the hills behind the beach to get the best views across Cardigan Bay.

This route takes you up behind the town towards Trefeddian farm, all the time benefiting from incredible panoramas of the estuary, the perfect hooked-spit and a distant coastline rolling away south, first to Borth, then Aberystwyth and beyond. 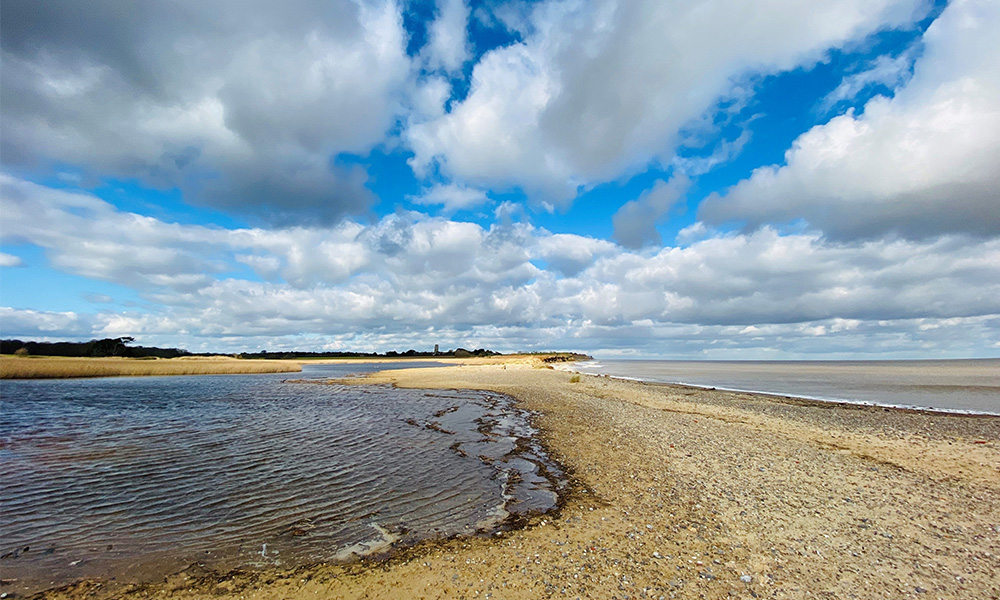 Covehithe Broad, an example of a coastal lagoon and bar

The Suffolk coast is one of the most dynamic in the country with rapidly eroding sandstone cliffs that are vulnerable to attack from northerly storms. Progressively the coastline is retreating in many areas and the waves are winning the battle between land and sea. Dotted along the coast however, are areas of deposition where the claimed land has been transported and features such as sand dunes, sand bars, lagoons and spits are also to be found along this constantly shifting shoreline.

Coastal lagoons are a relatively rare landform where a body of water is separated from the sea by a slither of sand or shingle known as a bar. North of the popular coastal town of Southwold there are some excellent accessible examples of both bars and lagoons.

This loop walk passes lagoons at both Covehithe and Benacre which are separated by a beach stroll of around 1km. Be sure to check tide times when completing this section as the beach access is significantly reduced at high tide. 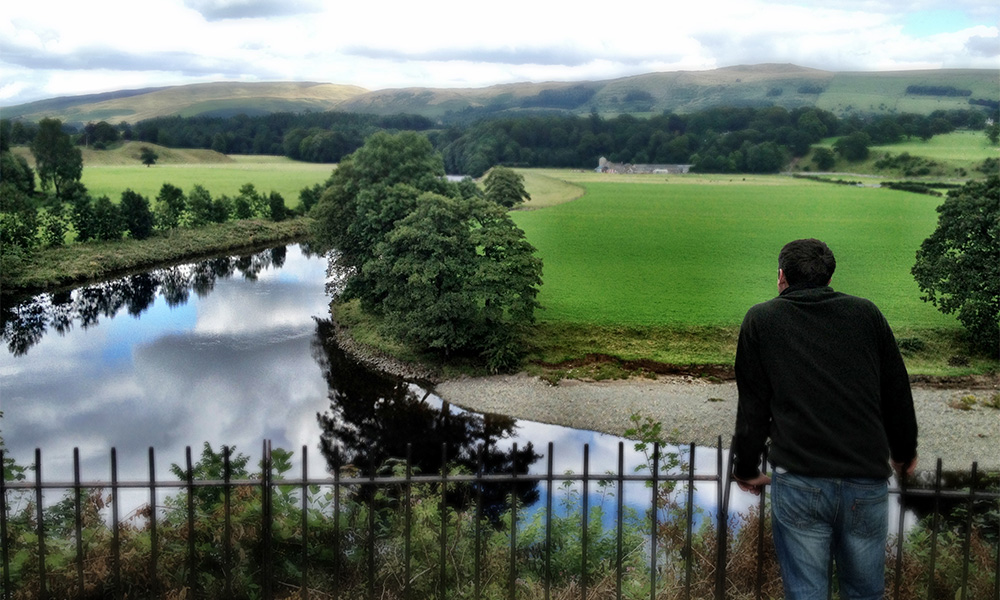 Ruskins View across the River Lune, an example of a slip-off slope and river cliff

The famous lookout over the Lune Valley was described by poet John Ruskin in 1875 as ‘one of the loveliest views in England, it has been appreciated for centuries and is a popular spot for passing geography students visiting the Lakes and the Dales, giving teachers a wonderful opportunity to explain the textbook features of a river valley and a river bend.

The lush pasture of the surrounding floodplain provides excellent grazing for local farms and the ideal levelled terrain for the town’s showground. The river itself provides perfect examples of river beaches (known as slip-off slopes) and river cliffs.

This short and easy walk takes in the town and the river as it flows downstream. Make time to browse around the streets of Kirkby during your visit, which boasts some fantastic post-walk cafes and bakeries! 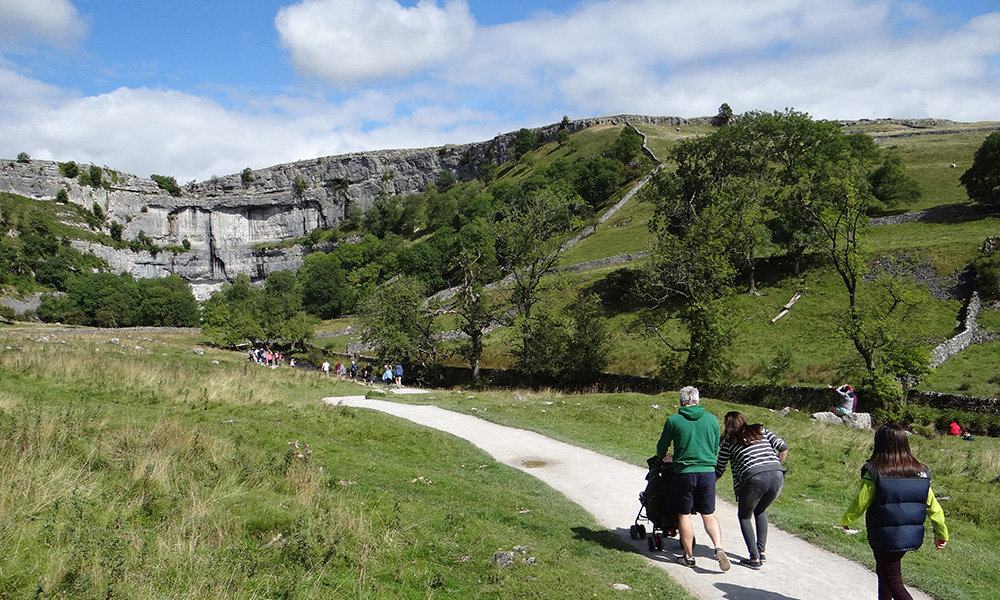 The approach to Malham Cove, an example of limestone cliffs

The accessible walkways up to the base of the Malham Cove make these spectacular limestone cliffs popular with all ages and abilities of walker.

After admiring the imposing 80-metre-high natural marvel, carry-on upwards to the top of the cliffs to admire the perfect examples of limestone paving, formed during the last ice age, before joining the Pennine Way and heading east towards Gordale Bridge.

This walk passes Janet’s Foss Waterfall which has a tempted plunge pool at its base, with the return route home following a lovely upland stream as it meanders back down the valley. 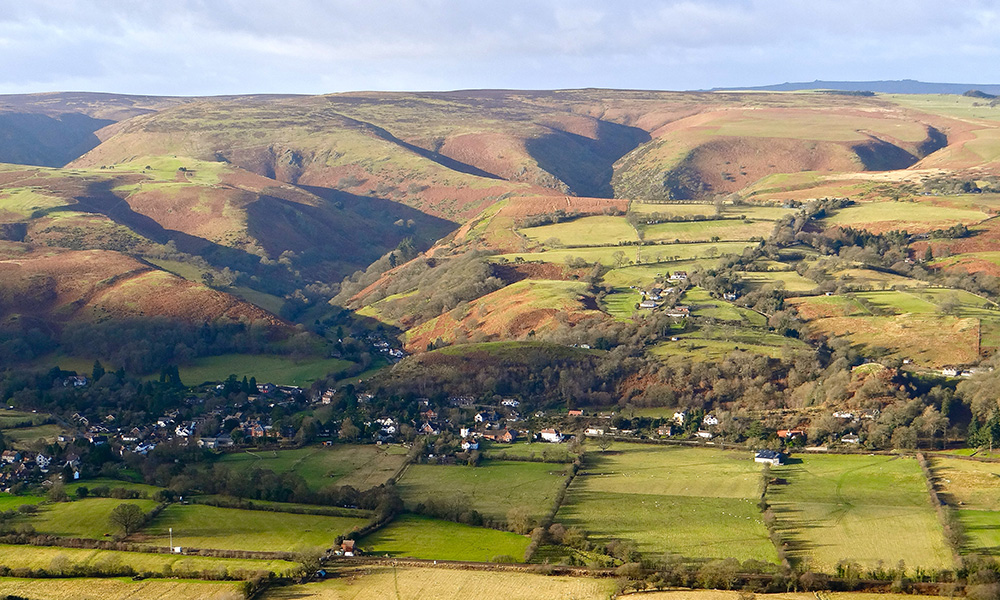 In the summer months of the school calendar students heads to Carding Mill Valley in Shropshire by the coach load. The upper-course streams and landforms appear in many a textbook and provide fantastic examples of V-shaped valleys, interlocking spurs and an ideal mountain stream for fieldwork.

Venture to the head of the valleys on the top of the Long Mynd and the boggy, wild moorland is dotted with springs and tributaries feeding down each drainage basin to the streams below.

This loop walked drops into the neighbouring Batch Valley before climbing up onto the exposed golf course which has stunning views north to Shrewsbury and the imposing Wrekin to the north east. Dropping back down into the head of Carding Mill Valley, warm yourself up in the lovely National Trust alpine-style café. 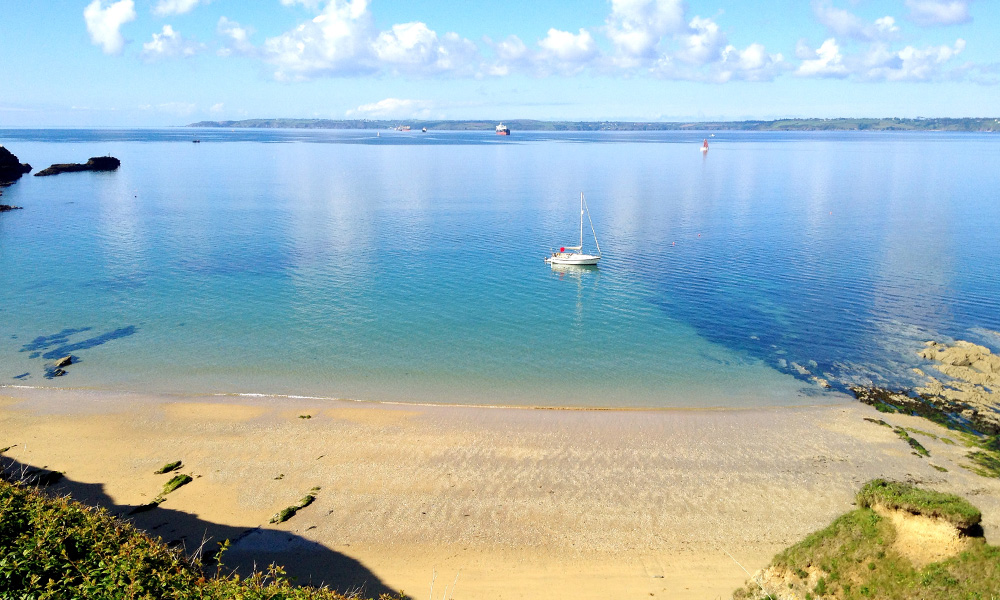 The geology of the Cornish coast is ideal for the creation of the classic coastal landforms of headlands and bays. With crystal clear water and golden sands, the beaches of Falmouth Bay are amongst some of the most spectacular in the country.

This comfortable stroll around the headland south of Portscatho is usually away from the crowds and provides a great variety of viewpoints across the water in all compass directions at different stages of the route.

The path north of St Anthony Head gives the tempting option of heading onto the beach at either Great or Little Molunan Bay. If parking is tricky in tiny Bohortha, drive on to the carpark at Drake’s Downs. 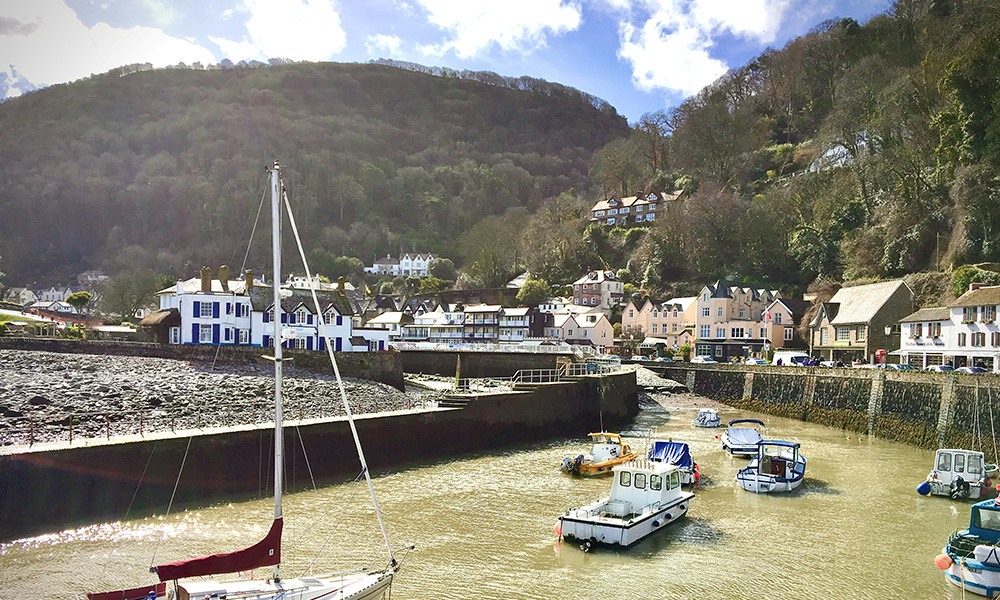 Lynmouth harbour, further upstream in the village is a great example of a confluence

A flash flood in August 1952 caused devastation and destruction to the small, harbour-side village of Lynmouth on the North Devon coast. The incident has subsequently been studied in schools across the country as UK flooding case study.

There are many factors which increase the vulnerability of Lynmouth to flooding, of these, one of the most significant is the fact that two rivers, each draining steep sided valleys meet in the heart of the village. The confluence of the West Lyn and East Lyn river is visible from the bridge on Riverside Road, which if you follow further down to the sea is the location of the excellent Lynmouth Flood Memorial Hall which provides a fascinating insight to the night of the flood and its catastrophic effects.

This riverside walk along the banks of the East Lyn River takes you through wooded paths on the Tarka Trail and Coleridge Way. After crossing over the river at Watersmeet House head back to Lynmouth, or if you’re feeling fit continue upstream, heading either towards Hillsford Bridge or continuing on the Coleridge Way to Leeford.

Take some time to stroll down to the harbour in Lynmouth and catch the funicular cliff railway up to Lynton for the best views of the coast. 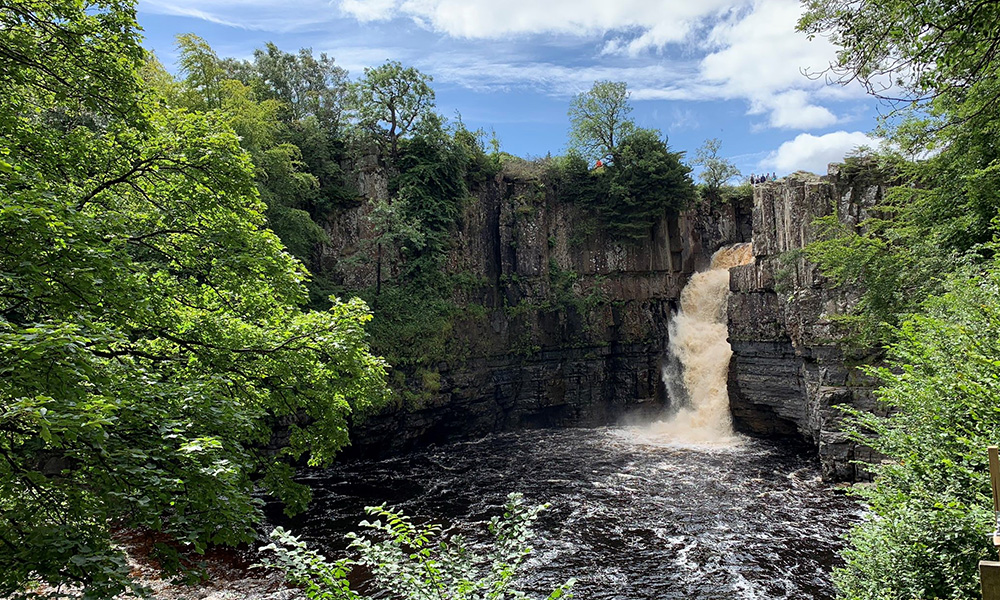 Who doesn’t love a waterfall? We’re spoilt for choice for waterfalls in the upland areas of the UK. In UK classrooms the waterfall which is most often talked about by teachers is High Force on the River Tees. It is the epitome of a textbook waterfall, complimented by a gorge and a deep plunge pool at its base.

Water cascades 70 feet (20 metres) over it and the roar of the water can be felt as well as seen as you move closer to the falls through the secluded woodland paths which hug the river from the parking area at Bowles.

This circular walk passes the smaller Low Force first, which gives a taster of the bigger brother further on. Continue past High Force before heading home past Whiteholm Bank crossing back over the river at Wynch Bridge. 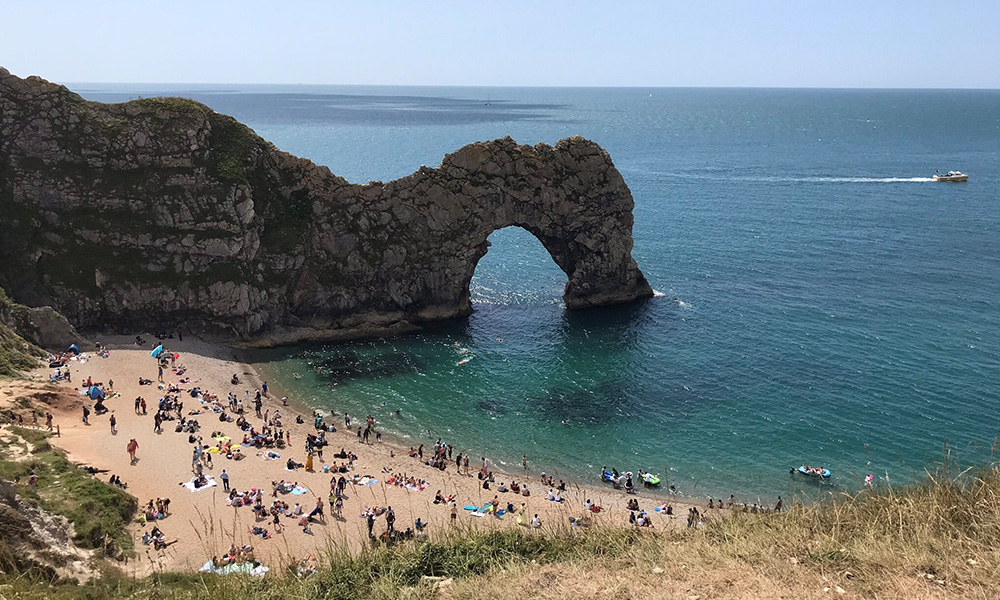 Visitors to Dorset are spoilt for choice for amazing and iconic geographical landforms along the Jurassic Coast as well as opportunities to fossil hunt in locations such as Kimmeridge Bay.

Head to the carpark at Lulworth Cove and instantly you’re drawn to an incredible natural circular bay which is the first indication that this coastline has been carved dramatically by years of erosion.

This circular route takes you along the cliff tops West on a small section of the South West Coastal Path, keep your eyes peeled for blow holes! You cannot miss Durdle Door as it majestically appears below you. Perhaps one of, if not the most iconic physical geography landform in the UK, the natural limestone arch is one of the most photographed natural landmarks in the country and is an obvious example of the sea’s ability to sculpt the coast.

The walk returns to Lulworth Cove via Lulworth via the farms at Newlands and Hambury. 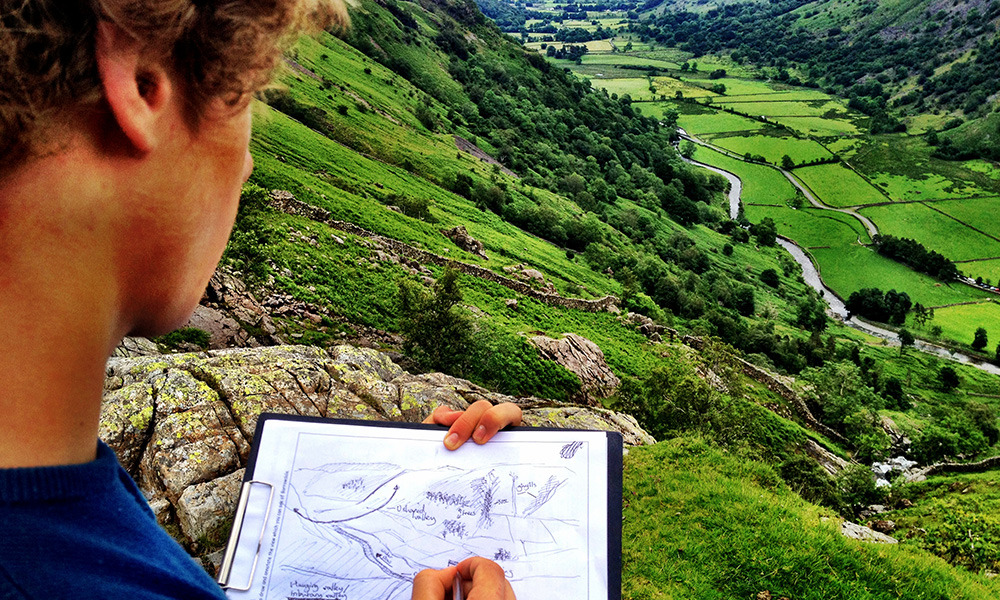 The Borrowdale valley sketched from the hanging valley of Sourmilk Gill

South of Derwent Water the tiny hamlet of Seathwaite in Borrowdale is one of the wettest parts of the UK and receives around 140 inches of rain a year. Catch it on a dry day however and the hikes up the valleys here are spectacular, offering views of the glaciated and intensely green valley below.

This circular walk starts with a hefty climb up Sourmilk Gill. This textbook example of a hanging valley has been created as a result of a smaller less powerful tributary glacier feeding into the main glacial flow and being unable to erode as deep vertically, subsequently leaving this feeder valley ‘hanging’ as the ice melted.

Continue up the valley to the top of Great Gable before returning to Seathwaite alongside Styhead Gill which is fed by Styhead Tarn. Look out for waterfalls on the way especially the impressive Taylorgill Force.

So there you have it – 10 of the best walks to take in some of the classic geographical landforms across Great Britain. Find some stunning landforms near you and tag us in on social media. 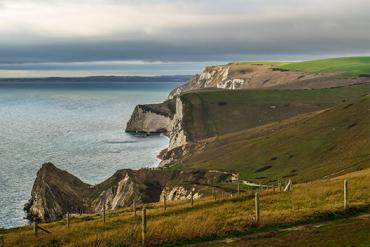 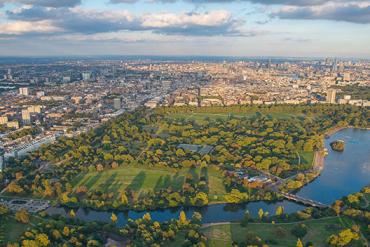 9 ways to explore closer to home 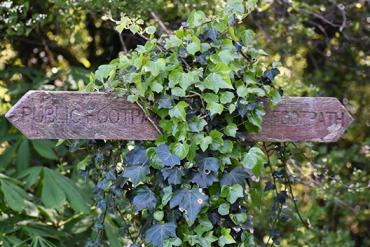