​How do I spot an Ancient Woodland?

Wandering through a wood can be magical and feel totally wild. But most woodlands in Britain are shaped by human hands – and there are clues that reveal their hidden histories.

An ancient woodland is officially an area that’s been continuously wooded since the year 1600 in England or Wales, or since 1750 in Scotland - the discrepancy is due to the availability of historical documents, rather than anything to do with Scottish trees!

The natural wildwoods of Britain were actually mostly cleared in prehistory between the Neolithic and the start of the Iron Age (4000BC - 800BC). We think of woods as wild places where nature rules, but for most of history they’ve been part of the working countryside, carefully managed to maximise timber for housing, ship building, fencing, firewood and nuts, leaves and seeds for animal and human food.

Look at the trees!

Traditional ways to manage trees ensured they provided the maximum amount of useful timber possible, without having to chop them all down. The most common methods are pollarding and coppicing. Some woodlands are still managed along traditional lines, but in many others what you’ll see are the grown-out, neglected versions where branches designed to be harvested when small (for timber, firewood or fence posts, for example) have been left to grow for an extra 200 years or more.

Look for large, mature broadleaf trees with multiple trunks, all growing from the same base. Look around and you may see lots of other ‘multi-trees’ nearby.

No, they’re not all mutants! They were intentionally grown this way to get multiple large timbers from each tree base.

To coppice a tree, you fell it low to the ground, leaving a stump known as a stool. Far from killing it, this re-energises growth, and multiple new shoots each eventually grow into strong, straight trunks.

Coppicing prolongs the natural life of a tree, and some coppice stools in ancient woodlands are more than 1,000 years old.

Once the coppiced tree is cut again (usually after 12-35 years, depending on what thickness timber is required), the stool will again produce new shoots. 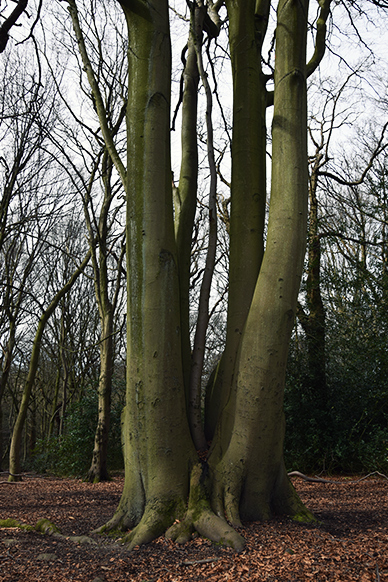 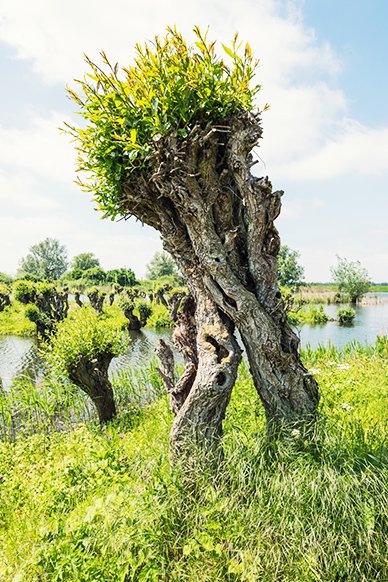 Pollarded trees are lopped off 2-4m (6-13ft) from the ground, so that the multiple trunks grow from higher up the tree. The main stump is called the bolling.

Pollarding increases the yield of timber, fruits and seeds from one tree, but out of the reach of feeding animals like deer or cattle, who would eat new shoots.

If you can see pollarded trees in a wood, it’s likely that the area was used to for grazing animals, or was part of land where nobles would hunt deer.

Across a wood, different trees would be pollarded in different years so there’d be a steady supply of timber and less competition in the canopy to aid tree growth.

Look around the woodland – are different pollards different thicknesses?

Look at the place names on your map. You may find different areas of a wood have different names. Areas that are now open fields may also have names that suggest a woody past:

Hatch refers to the site of a gate, often into a woodland enclosure traditionally used for pigs feeding on acorns and beech mast.

Hollins indicates a grove of holly, cultivated as a winter fodder for cattle. Thick clumps of holly bushes in woods may be relics of these important resources.

Grove, Shaw, Coed, Coilee, Holt, Lund, Frith, Dene and Worth all relate to woods. Hanger and Hurst relate to wooded slopes or hills.

Surprisingly, Spring is more frequently associated with coppiced woodland (where new growth ‘springs’ up from old stools), than water sources.

This one may come as a surprise: ‘Ancient’ trees aren’t usually found in ‘Ancient’ woodlands.

Ancient trees are in their third, final stage of life, beyond healthy adult maturity - they grow very wide, are often hollow and have areas of decay. They’re fantastic habitats for wildlife, supporting up to 200 species of plants, animals and insects, but in a hard-working medieval woodland, trees would be felled before they got so old.

Ancient trees are most commonly found in the former Royal hunting forests and medieval deer parks, like the New Forest, Sherwood Forest and Windsor Great Park, where they’ve been left to mature without interference. Ancient trees which have been coppiced or pollarded earlier in their lives (resulting in a very fat, wide base and a distinctive crowd of thick, vertical limbs) are usually found in wood pastures and commons, estate parks and hedgerows. 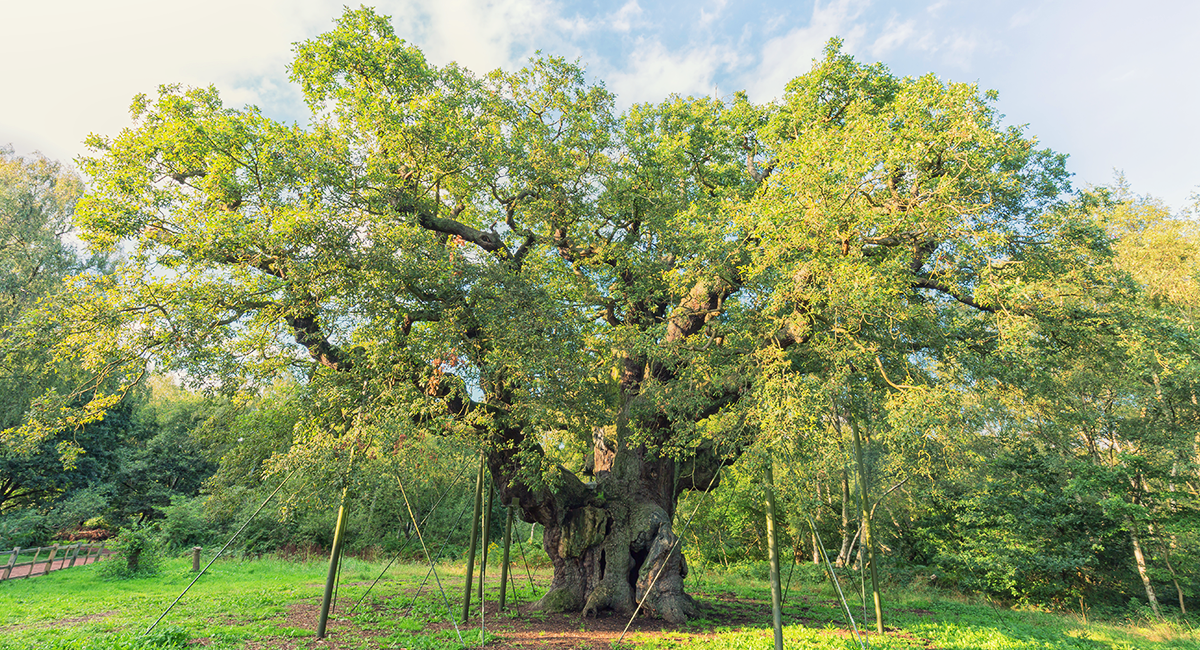 Lone trees may be the surviving remnants of a hedgerow (are the trees in a line?) but individuals also stand on village greens, near old buildings or at crossroads and old land boundaries. Ancient yew trees are often in churchyards.

How old is this tree? Hug it and see!

Often tree-ring dating isn’t possible for ancient trees – firstly because you’d have to cut them down to count the rings, and secondly (and more importantly), the soft core wood that has the tree rings has rotted away. So dating is usually done by assessing girth – the size of a tree’s trunk at its narrowest part, or ‘waist’, about 1.5m above the ground.

The easiest (and most fun) way to measure a tree’s girth is to see how many people need to join hands to hug it. Your armspan is roughly the same as your height, and based on an outstretched fingertip-to-fingertip armspan of 1.5m (5ft), your tree may be ancient when it’s:

If its girth is 9m – 6 hugs – it could be more than 800 years old, and have been an acorn when Genghis Khan was invading China or the Magna Carta was being signed by King John. 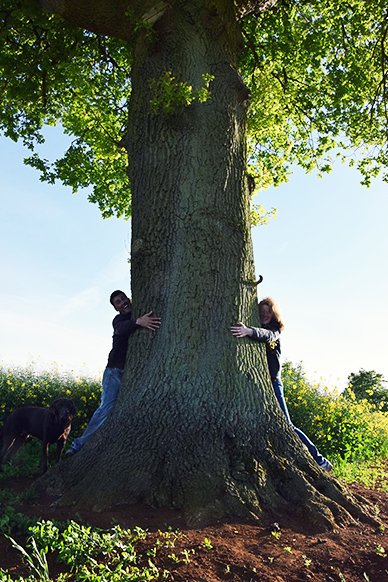 Hug a tree to work out how old it is

The Woodland Trust’s Ancient Tree Hunt has searchable maps and a database with the locations of over 112,000 ancient trees. And they want more! If you know the location of “fat, old trees” that aren’t on their list, get in touch so they can be recorded. 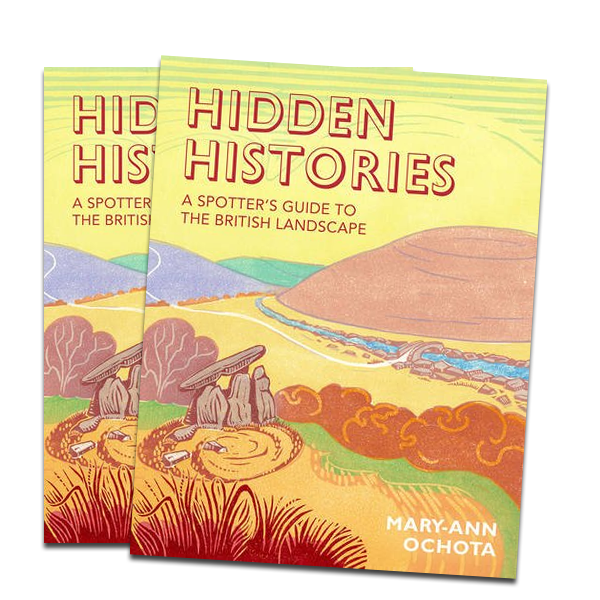 Available in the OS shop now.

Save £3 on the RRP with the discount code: MAGETOUTSIDE